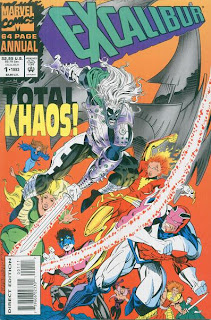 Summary: A dark elf plagues Cerise’s dreams. With Excalibur, she traces the source of her dreams to a nearby castle, occupied by an elderly magician named Ghath. He blames the dreams on his attempts to return to his true world and apologizes. Suddenly, the dark elf Khaos breaks in and attacks. After taking him captive, Cerise realizes that Ghath is the true enemy; a sorcerer who’s still causing destruction on his homeworld of Irth. Excalibur and Khaos follow her to Ghath’s castle, where they’re magically transported to Irth. They defeat Ghath, only to discover after returning home that remnants of Ghath’s spell have trapped Khaos on Earth. He declines Excalibur’s offer to join and focuses on discovering a way home.

Continuity Notes: This story is set shortly before Alan Davis’ final Excalibur storyline, “Days of Future Yet to Come.”

Gimmicks: This comic comes polybagged with a Khaos trading card.

Review: Excalibur had a 1993 annual? A Collectible First Appearance of a New Marvel Superstar annual?! Somehow, I was unaware of this gem until I discovered an online article about the 1993 annual stunt. This same article has an interview with Evan Skolnick that confirms that Khaos and his associated cast of characters began life as creations in Skolnick’s teenage Dungeons and Dragons campaigns. This means that Khaos has ten times the backstory of the average 1993 annual creation, which Skolnick attentively spells out over a lengthy flashback sequence. Trust me, there’s a lot of history behind Khaos that I haven’t recapped, largely because it isn’t germane to the main story at all.

Now, of course it’s absurd that Excalibur’s caught up in an adventure with a Marvel staffer’s D&D avatar, but I have to admit that Khaos is more tolerable than almost all of the other 1993 debut characters. There’s nothing unique about a noble warrior from a fantasy world that’s trapped on Earth, but I don’t recall those tropes showing up too often in the early ‘90s. Khaos is about ten years behind the times, but considering that those times mostly brought us cyborg bounty hunters with fantastic mullets, he’s almost a welcome bit of nostalgia at this point. The problem with the story is the lack of connection between Khaos and Excalibur. There’s some talk of Khaos being a misfit during his youth, and Nightcrawler is jealous of Cerise’s apparent attraction to him, but these are minor moments in a very dense story. There’s also a tacked-on rationalization that Khaos and his friends could be Irth’s incarnation of Excalibur, which is a weak way of trying to tie Excalibur’s long-running alternate reality shtick into throwaway annual filler. This could just have easily been a West Coast Avengers adventure; trying to sell the audience on some phony association with Excalibur is just a reminder of how generic this story has actually been.

Summary: A knight serving the Princess Flavia holds Numbers hostage, forcing the Technet to retrieve special nectar from another dimension. After narrowly escaping from giant bees, Technet returns with the bounty. Flavia appears and takes the nectar, using it to cure the knight’s acne.
Review: It’s a Technet comedy story, so of course this is going to be silly and lighthearted. The use of Princess Flavia is a nod to people who might be familiar with the character from literature or opera, but it’s not as if Cavalieri is trying to produce a serious work here. It’s a joke story, and since most of the jokes work, I can’t complain.