Paramount has posted the Turtle Power documentary for free on its YouTube page.  The focus is mainly on the early days of the comic and the initial effort to franchise the characters in the late 1980s.  Two things I was shocked to discover -- sitcom "legend" Chuck Lorre was the writer initially approached about developing the animated series, before he passed the job on to David Wise.  I knew Lorre wrote the theme song, but had no idea he might've written the actual series.

I was also stunned to learn Michael Ian Block and Robert Ben Garant of MTV's The State played Raphael and Michelangelo (?) in that horrific TMNT live rock show.  I wonder if they were the actors playing the parts on their Oprah appearance?

It's a fun doc, and worth your time if you have fond memories of the Turtles.

One thing I’ve rediscovered when going through old issues of Wizard is just how successful the X-Men toyline was in the 1990s.  I’m assuming it was a massive success, because how else could you justify virtually any character to ever cameo in an X-book receiving his or her own action figure?  Kids had to be desperate for more X-toys if they were buying Slayback figures, right?

The X-Men toy commercials, though -- who even remembers those?  Looking on Youtube, every Masters of the Universe, Super Powers, G. I. Joe, and Transformers toy commercial seems to have been lovingly archived.

X-Men toy commercials are there, but I don’t sense any enthusiasm around them.  Is this true for all toy commercials of this era; is it just accepted as fact that ‘80s toy commercials are superior to ones made in the ‘90s?  Did the FCC impose some strict regulation on toy commercials that just made them dull after the ‘80s?  Or were toy companies no longer willing to pay for higher-quality animation to use in these spots?  Also, given the money flying around the industry at this time, I now wonder why Marvel didn’t produce high-quality animated ads for X-Men comics, like the ones Hasbro bankrolled years earlier for G. I. Joe.


Two commercials I do distinctly remember from the early ‘90s:
The commercial for the X-Men Sega Genesis game.

And the commercial for the second edition of the Marvel Universe trading cards.

(This is where I would've posted the commercial, but I can't find it online.  Anyone up for finding this one?  It aired during the summer of 1991 fairly regularly.)

Which is another memory triggered by old Wizards -- trading cards were a phenomenon during this era.  Yet, no one produced any first-rate animated ads for Marvel or DC cards, either.  The ‘80s really were the Golden Age of selling kids stuff, weren’t they?
Posted by G. Kendall at 6:13 PM 11 comments: 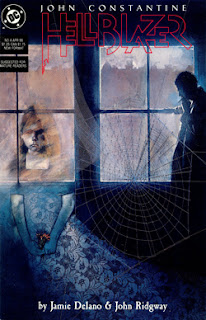 HELLBLAZER #4.  My favorite cover, so far.

Delano’s referencing tensions between UK citizens & Middle Eastern (or “Asian”) immigrants back in 1988.

So this was the comics debut of Zed? They certainly gave her a makeover for the show. And Americanized her, not surprisingly. 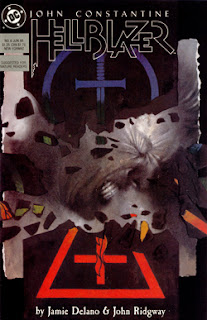 I vaguely recall this child bride plot from the show. The episode removed any reference to American fundamentalists, I believe.

Actually, I have no idea how much of the 80s fundamentalist movement made its way to the UK. Don’t know if it was uniquely American.

Delano seems to think 80s pyramid schemes were run by Christian fundamentalists, but I’ve never heard that one before.

Wonder if he’s just lumping it all under the category of “’MERICA!”

Okay, DC’s copyright reads 1988, but Delano consistently sets stories in 1987. Is there a significance to this?

Constantine arrives in America. I wonder if he’s going to lecture us on what backwards rubes we are.
“Oi! Why don’t you wankers put down yer guns an’ Bibles an’ pick up a pint, yeh?”

The fundamentalist group from the last issue has accidentally summoned the spirit of MIA Vietnam soldiers -- awakening them inside their hometown in Iowa.  Not a bad idea for a story.
There is the occasional glimpse of real people inside this town; they live with guilt and loss & can’t cope with the pain.
It’s just disappointing that Delano is doing what every “controversial” 80s Vietnam piece does.
Small town boys turned into monsters. Soldiers as murderous, rapist goons.
Disagreement with the war expressed with simpleminded caricatures of the people drafted into fighting it.

I think an extremely sanitized version of this plot made its way into the TV show.
It’s hard for me to remember, since I usually forgot each episode as soon as it aired.

John casually decides to stop a gaybashing this issue, reasoning that his pal Ray might be the target.
Although, in fairness, John rarely seems in a hurry to do anything in this series so far.

My memory is that Zed and John had a chaste relationship on the show.
In the comic, they immediately hook up and give us what might be DC’s first on-panel sex scene.

We learn that John’s gay friend Ray has AIDS this issue. His teashop has been closed down due to the threats.

I think AIDS was often the vehicle used to introduce gay characters back in the 80s. Ray might be the first in comics.

This is also the most British issue yet. Skinheads, footballers, slang for various ethnicities I’ve never heard before…

My initial entry in the Comics Should Be Good blog on CBR was posted today.  The Guide to the Guide to Comics is my regular feature that examines the early years of Wizard, which should at the very least be interesting.  Perhaps not "Spawn rubbing worms all over his face" interesting, but still worth reading, I hope.
Check it out here: http://goodcomics.comicbookresources.com/2015/11/02/the-guide-to-the-guide-to-comics/ 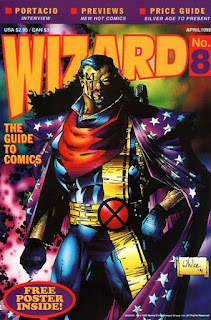