Micro-Reviews - TALES OF THE BATMAN 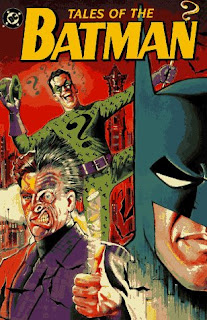 TALES OF THE BATMAN - a 1995 short story compilation, featuring work from writers like Joe Lansdale and Isaac Asimov.  Not sure how I ended up with a copy.  Those “Buy 10 Books for a Penny!” book club ads in ‘90s comics always seemed to feature this collection, so I assume someone I knew ended up with this and passed it along to me.


I’ll admit that, until now, I’ve never found the time to read this thing.


For years, I assumed the cover was by Brian Stelfreeze, but it’s a Steve Stanley piece.  No spot illos on the inside, in contrast to all of the Marvel novels of the era.


The collection opens with “Neutral Ground” by Mike Resnick.


A short, unexciting intro chapter, based on the premise of a neutral costume shop for Gotham’s costumed figures.  Including Batman.


I’m sure DC’s bible now makes is clear Batman makes his own gear.  And the prospect of him ever sharing “Neutral Ground” with criminals is hard to swallow.


The story also doesn’t indicate Bruce wears a disguise when shopping for new gloves and boots, which is odd.


Then again, the Riddler is described as having “thinning blond hair,” so maybe the implication is that all customers wear disguises.


A Dick Grayson solo tale, set during his high school days.  Apparently, Dick works for his high school newspaper -- which has its own building, printing press, and reputation for investigative reporting.  Okay.


This reads as a YA story, which isn’t inappropriate, since the plot centers on Dick investigating a ring of teenage thieves, led by a hypnotist.  I wasn’t expecting YA material in the anthology, however; it’s presented as a novel for older readers.


Goldsmith’s portrayal of Batman is years out of date.  ‘90s Batman was already past his “chatty” stage.  He also thinks nothing of having Batman and Dick Grayson interact in public, which likely didn’t happen much after the Silver Age.


The number of lame villains in these opening pieces is stunning.


Lansdale became a writer on TAS based on his earlier prose Batman work.


“Subway Jack” is a predator, possessed by the evil spirit that inhabits a blade. It’s another entry in the Batman vs. serial killer genre, following a rather goofy story that seems inspired by the ‘60s TV show.


Lansdale emphasizes the friendship between Gordon and Batman, allowing both to take turns as narrator.  That’s when the narrative isn’t switching over to descriptions that read as excerpts from a comic script.  I’m assuming most readers are familiar with terms like “splash page,” but maybe a casual fan at Waldenbooks was confused.


Nothing new about pitting Batman against Jack the Ripper types, but Lansdale understands the two main characters well.  And the way he plays around with the narrative breaks up the monotony.


Instead, it’s a mystery story that centers on the “real” Bruce Wayne, the millionaire investigator who inspired the fictitious hero “Batman.”


Bruce, now 73, has approached a society of intellectuals known as the Black Widowers to help him resolve a personal mystery.


Bruce is concerned that his current butler, Alfred’s nephew, was plotting to steal valuable pieces of Batman memorabilia.  (The real Bruce having amassed the world’s largest collection of Batman paraphernalia, flattered by “his” success.)


After exhausting all possibilities, it’s the Black Widowers’ butler who notices a clue everyone missed, clearing the case.


Asimov seems enchanted by the idea of Batman as a human hero, dismissive of Superman & other impervious gods.  What that has to do with creating fiction within fiction, giving us a “real” Bruce who was never Batman -- that, I don’t get.


It seems, especially if the story stars an elderly Bruce, that the same mystery could’ve been told with the standard, fictitious Batman.


But who am I to judge Isaac Asimov?
Posted by G. Kendall at 8:34 PM No comments:

Email ThisBlogThis!Share to TwitterShare to FacebookShare to Pinterest
Labels: batman, prose novels, tales of the batman

I Still Want that Maxx Figure

And you can see many of the early Spawn ads in this video (along with Avi Arad promoting Marvel's X-Men line of toys.  How many multi-millionaire Hollywood producers could you find working the booth at a toy convention? )