I’m a bad comics fan because I’ve never read this before: 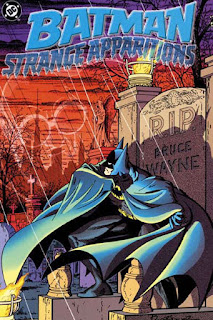 The Englehart/Rogers BATMAN run, perhaps the first time any run was referred to as “definitive.”  (Peter Sanderson believes he coined the idea that this was THE Batman.)


Enjoying it in its proper context is almost impossible today, since the material has been mined so often in the comics, movies, & cartoons.


It’s also significant for being one of the first runs on a comic written as an homage to the previous years.


Even before Byrne’s FF, Englehart was writing BATMAN as a tribute to BATMAN.


(Okay; technically he was writing DETECTIVE COMICS, not BATMAN, but you get the point.)


Outside of his visual, Phosphorus has nothing going for him. Not surprised he’s never developed into a major villain.


Not only is his motivation lame, but he pulls a “THIS isn’t how I’ll defeat you, Batman!” and just exits his first fight for no reason.


Then spends the next issue trying to find Batman -- you just let him go, dum-dum!


Englehart is also trapped in ‘70s narration, to the point that he’s referring to the reader as “amigo.”


Nothing really “definitive” yet, but these are nice-looking comics.  Walt Simonson inked by Al Milgrom of all people!


Not that anyone reading in 1977 was around for BATMAN #1, but some form of legend had to surround those issues.


Interesting that these issues indicate that the Golden Age BATMAN stories are still canon. I guess DC had the sliding timescale, too?


Strange’s plot seemed to inspire at least 2 episodes of the ‘90s cartoon. But they wisely ignored Strange’s army of hideous giants.


Strange is an extremely unfocused villain in this arc; he’s a master of disguise AND a mad scientist AND an extortionist…AND he has a deep respect for his foe, Batman, AND he has a bit of an identity crisis. 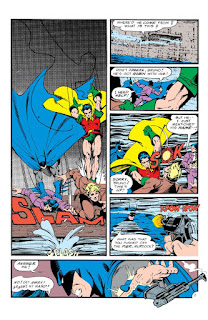 
The story assumes you already know the Penguin will steal a jewel-encrusted penguin statue, then plays with your expectations.


Not hard to see the influence Rogers had on McFarlane’s style. Rogers was doing dramatic, implausible capes back in the ‘70s.


Rogers is also far more detail-obsessed than other artists of this era. Perez isn’t quite Perez yet, but Rogers arrived fully formed.

DETECTIVE #474 - Deadshot returns after a few decades away.


Perhaps the modern equivalent of someone reviving Knight & Fogg in a Spider-Man comic.


I don’t think DC got any more continuity thick than this in the ‘70s --
--Englehart tries to rationalize Bruce Wayne’s various public personas, sneaks in references to Alfred’s days as an amateur detective…
…shouts out Mort Weisinger & Dick Sprang…and tries to reconcile Robin’s TEEN TITANS continuity.


All while reviving a goofy villain from the past and giving him a gritty makeover for these dark, modern times.


And perhaps the first time Joker callously kills one of his henchmen?


Much of the Joker’s dialogue here was used almost verbatim on the ‘90s cartoon adaptation.


You can also see elements of ’89 BATMAN here (Englehart wrote early treatments for the movie).


Vicki Vale is essentially Silver St. Cloud in the movie; plus, we have villains giving out money to the public…The Joker developing a toxin that only works in combinations & breaking into live TV…later falling to his death…Gotham as a seedier NY… 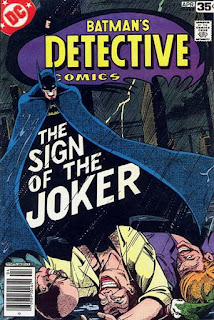 
So, Englehart left before resolving the Hugo Strange ghost storyline? Or was Boss Thorne turning himself in the conclusion?


Englehart exits on a “Batman skipping out on Gordon” scene (still new at this point)…and a dramatic splash page of Batman flying over the city.


With that, we have what used to be the “definitive Batman” …
…until everyone decided they liked him better as a ninja psychopath with anger issues, I guess.
Posted by G. Kendall at 9:30 AM 2 comments:

I saw this video once on Youtube and could never find it again.  Thankfully, Robot6 has come to the rescue!  Karyn Bryant interviews Marvel staffers and editors of the day, including Suzanne Gaffney and Bob Harras of the X-Men.  Notice which issue of UXM, already a few years old at this point, is pinned to Bob Harras' bulletin board.

Email ThisBlogThis!Share to TwitterShare to FacebookShare to Pinterest
Labels: harras


The Tumblr page where I plan on listing annotations for some of the musical references and cultural touchstones for my novel.

Recent posts in The Milch Studies:

http://www.therealgentlemenofleisure.com/2016/01/the-milch-studies-nypd-blue-season-one.html (find out what Harvey Bullock actually looks like...)

Recent entries in the Wizard retrospective on CSBG:

The next issue has perhaps my favorite Wizard article of the magazine's run, so that should be interesting.
Thanks for reading, folks.
Posted by G. Kendall at 8:36 PM No comments: