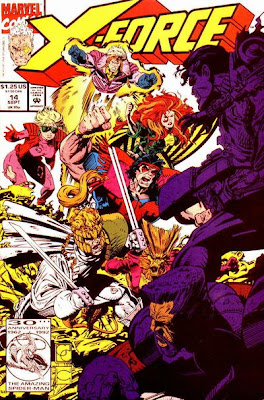 Summary
Cable and Vanessa are separated from X-Force after the destruction of their headquarters. SHIELD arrives as back-up and attempts to arrest X-Force. Rictor switches sides and helps X-Force defeat the SHIELD soldiers and hijack their ship. After making plans to hide out at Warpath’s reservation, Crule bursts into the ship and grabs Cannonball. Meanwhile, Cable forces Vanessa to take him to Tolliver’s hideout. They are both shocked to discover the real Domino in chains. Deadpool suddenly appears and stabs Vanessa in the back.

I Love The ‘90s
Boom Boom tells Rictor that he has a Skid Row haircut. This issue was released during the summer of 1992, at which point Nirvana and Pearl Jam were the hottest acts in music, and hair metal was on its last leg. The last page of one of Pacella’s issues was a splash page of every X-Force member reflected on Cable’s metal face. The amount of detail he put into drawing every character’s giant, perfectly styled hair is astounding. It always seems like comics are at least a year behind pop culture, and the hair metal stylings of X-Force are proof.

Continuity Note
Cannonball is able to extend his blast field so that it protects everyone from last issue’s explosion. That’s a use of his power that certainly isn’t brought up very often.
Cable teleports to place called Graymalkin, which is also the name of the street address of the X-Men's mansion. This was another clue that Cable might be Cyclops' son.

Miscellaneous Notes
On the Entertainment This Month page, there are ads for eight separate Image titles, three of which are advertised as being from Rob Liefeld. Some of the letters comment on Liefeld leaving (one even saying that it’s a mistake on his part), but the editor’s responses don’t mention Liefeld at all. All of these letters name Mark Pacella as a great replacement.

Review
After stalling for several issues, the plot finally begins to move again. X-Force spends most of this issue fighting generic SHIELD agents, but it’s actually more entertaining than last issue's poorly choreographed fight with Weapon Prime. A lot of this probably has to do with Terry Shoemaker, the first competent artist to draw a full issue of this series (Mignola only drew sixteen pages). I didn’t care for Shoemaker’s art at all as a kid, but I look at it now and see that his compositions are strong and the storytelling is clear. He lacks a lot of that early ‘90s style, which is probably why it originally didn’t stand out for me. Nicieza is still trying to tie up all of the loose ends left by Liefeld, by touching on Weapon Prime, SHIELD, the Externals, Sunspot, Domino, Tolliver, and Vanessa. Rather than feeling disjointed, there’s actually a sense that the various plots are going somewhere. The pacing of X-Force has always been odd, with Liefeld throwing out three or four ideas, and then suddenly abandoning them for fight scenes that drag on for three issues. Nicieza is starting to make it seem as if there was a plan for this stuff all along,
Posted by G. Kendall at 8:42 PM 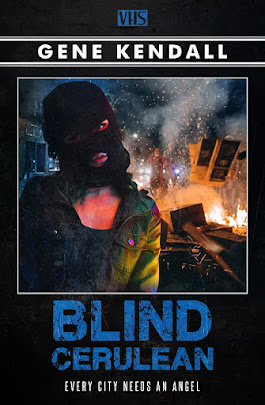