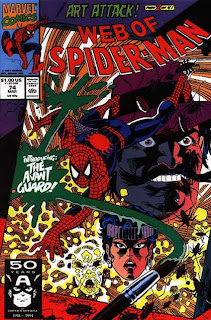 The Plot: Following a cold response to their work, performance artists Spark and Bora meet their mentor, the Painter, backstage. The Painter declares the trio “the Avant Guard” and uses his ability to warp reality to transform Spark into a hulking behemoth. Spark attacks the audience, but is repelled by Spider-Man. The Painter teleports Spark away, declaring his next scheme will have more substance.

The Subplots: Peter has been forced into attending the performance by Kristy, who seems to be Spark’s only fan. At the show, they run into Peter Nicholas again. Kristy accidentally reveals her crush in front of the painter, and blames Peter for making the incident more embarrassing.

*See _________ For Details: The theatre’s art exhibit includes a painting of a foot in a holey sock. Peter recognizes it from Amazing Spider-Man #22 (I don’t remember this scene, but I’ll take a shot in the dark and say it involved Steve Ditko making a statement against the modern art scene). Peter Nicholas has a vague memory of Bora from his previous life as Colossus. A footnote points towards Moon Knight#35, of all places.

I Love the (Early) ‘90s: Spider-Man advises Spark to save his ad-libs for Arsenio.

Forever Young: Peter tells Peter Nicholas not to worry about Kristy, as “they’re fickle at that age.”

“Huh?” Moment: Two different groups of people mistake Peter Parker and Peter Nicholas. Has it ever been established that Peter Parker looks like Colossus? Shouldn’t Colossus be at least a foot taller?

Creative Differences: Spark’s diatribe against the audience on page six has been re-lettered.

Miscellaneous Note: The Statement of Ownership has average sales for the year at 209,174 and the most recent issue selling 202,200 copies.

Review: I seem to recall this arc getting a bad rap amongst fans, and while it is ridiculous, I give it points for just being fun. The Painter is apparently an obscure character from Marvel’s early days, who has the power to shape reality, and wastes it on making statements about art. Unless you’re doing the post-Watchmen story about the guy recognizing the true capacity of his powers and realizing the horrible burden they carry, his stories are probably going to be absurd. Isabella grounds the story by giving us plenty of interaction between Peter and Kristy, which is really the highlight of the issue. She’s moved on from her crush on Peter, and now thinks of him as kind of a dork, while he’s still trying to humor her (presumably to keep MJ happy). More often than not, he acts like her slightly obnoxious older brother, which is a role you normally don’t get to see Peter play, but it works quite well. There is one line, however, which could be interpreted as Peter mocking Kristy’s bulimia. He asks Kristy if she finds cheese dip too “dangerous” a snack, which angers her. Given the context (Spark just faked his death onstage), maybe it’s a reference to the theatre itself being dangerous, but it’s hard to tell. I certainly hope that’s all it was.

Oddly enough, I just read Amazing #22 a few days ago and you are correct in your guess about the holey sock. There is also a painting of a finger in a band-aid that the Circus of Crime steals. I love Steve Ditko.

Regarding the Peter Parker/Nicholas mix-ups, I remember that when John Romita Jr. was drawing the X-Men his Colossus often looked very much like his Peter Parker. Perhaps Isabella was thinking of that?