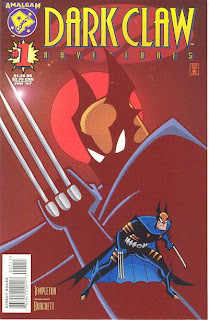 Summary: Undercover as Patch Malone, Dark Claw is attacked by Cyber-Ninjas while playing poker. Their master, Lady Talia, follows the tracer left in Dark Claw’s skin to his hidden lair, the Burrow. She incapacitates his sidekick Sparrow and engages Dark Claw in battle. Dark Claw, sympathetic towards Talia’s anger, stops the fight. Talia slashes his heart. After she realizes what she’s done, Talia prepares to commit suicide. Dark Claw comes to, resurrected by his healing factor, and talks to Talia. Having learned a lesson about revenge, Talia decides to move on.

Continuity Notes: Dark Claw (Wolverine and Batman) and Sparrow (Jubilee and Robin) first appeared in the initial wave of Amalgam titles in 1996. “Patch Malone,” perhaps my favorite amalgam, is a combination of Batman’s “Matches” Malone identity and Wolverine’s “Patch” persona. Lady Talia (Lady Deathstrike and Talia) is the daughter of Ra’s-A-Pocalypse (Apocalypse and Ra’s al Ghul). Lady Talia burned most of her body searching through the flaming wreckage of her father’s plane, which was shot down by Dark Claw in the “Legacy of Apocalypse” episode of Dark Claw: The Animated Show.

Review: Considering the obvious popularity of a Batman/Wolverine mash-up, it’s not a surprise Marvel and DC wanted another Dark Claw comic during the second Amalgam event. Doing it as a tie-in to a fictional television series, and hiring the creative team behind the actual comic tie-in to Batman: The Animated Series, was a stroke of genius. I’m a massive fan of the DC Adventures comics of the ‘90s, especially the ones written by Ty Templeton. This is a man with a deep love for Batman, obvious on every page he writes, and a knack for the animated style developed for the show. I realize some comic shops didn’t even bother to order the Adventures comics in the ‘90s (because, y’know, they’re not the “real” Batman and Superman), so many readers missed out on them, but they’re well worth an eBay hunt. Not every issue is a gem, but the overall level of quality maintained by the various incarnations of Batman Adventures over the course of ten years is amazing. Any issue by Mike Parobeck, Ty Templeton, and/or Rick Burchett is worth your attention.

As established in last year’s Dark Claw one-shot, Dark Claw is essentially Wolverine if he had been born into wealth, lost his parents, and later decided to don a long cape and fight crime. Despite the Batman trappings, Wolverine’s personality and power set remain the same. The concept is automatically biased towards the Marvel side, so it’s perfectly fair to incorporate Batman: The Animated Series and move the hero a little more towards DC’s neighborhood. While Templeton is very much a Batman guy, he effortlessly switches over to Wolverine’s persona, writing Wolverine Dark Claw as a grizzled brawler/noble warrior with a highly developed sense of honor. In fact, Dark Claw’s willingness to sacrifice his own life in order to grant Lady Talia some level of peace is virtually identical to one of the Wolverine/Lady Deathstrike confrontations from Larry Hama’s run. Not that the scene feels tired or recycled; it’s just true to the character. Considering that much of this comic, along with the rest of the Amalgam event, is tongue-in-cheek humor, the final scene between Dark Claw and Lady Talia has a surprising amount of heart. It’s one thing to use these meta-textual characters as vehicles for jokes, but to do an emotional sequence -- with the fictionalized cartoon versions of these in-jokey characters, no less -- takes real skill. I’m not sure if this qualifies as my favorite Amalgam comic (that probably remains Kurt Busiek and Paul Smith’s Iron Lantern) but it’s definitely a strong runner-up. Plus, it’s one of the best Adventures comics I’ve ever read…although my ‘90s X-completism might be influencing that decision.

Thanks to this review I just spent the last 45 minutes reading Batman Adventures back issues.

I have every issue of every incarnation of Batman Adventures -- I loved that series. Glad to see you giving it some praise!

This issue was great fun. I remember it fondly. Iliked the Ladronn Spider Boy too.