UNTOLD TALES OF SPIDER-MAN (the book) 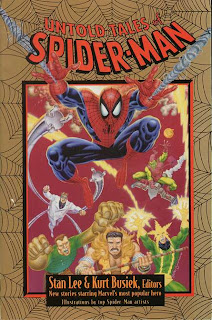 Marvel has a history of licensing its characters to prose novels that goes all the way back to the 1960s (when Captain America carried a gun), so it’s not much of a surprise to discover that a series of Marvel novels was published in hardback and paperback throughout the ‘90s. Unless you regularly visited the sci-fi/fantasy section of your local bookstore on a regular basis, however, you might not realize just how many of these novels were published. (This site has a comprehensive list if you're interested.)

I don’t pretend to have anything approaching a complete collection of the line, but I do have a couple of the novels; almost all of them purchased years after they went out of print from Amazon sellers. Obviously I was a hardcore X-completist for much of the ‘90s, and I tried to keep up with the Spider-titles whenever the current status quo didn’t infuriate me, but the novels were way off in whatever land for me. Marvel didn’t see fit to acknowledge them in their comics, not just in the stories but in house ads or Bullpen Bulletins blurbs, so I didn’t see the point in pursuing the prose novels.

I’m assuming the novels sold well, considering how many were made, but I’m not sure who the target audience for the books was supposed to be. Presumably hardcore fans who must have every appearance of their favorite character, regardless of format, although just keeping up with the comics can often be a financial burden. If you only read the comics, you wouldn’t be aware of the novels anyway. I guess the overlap of “comics readers” and just “general readers” was enough to help keep the line afloat. I can see this working -- someone looking through the sci-fi/fantasy section probably has some familiarity with the Marvel heroes. You’re looking for a book to buy, you recognize the name of the writer, and you remember the characters from the comics, so you risk a couple of bucks and try it out. It’s also likely that many of the viewers of the X-Men and Spider-Man cartoon shows never stepped inside a comic book shop or paid attention to a spinner rack, but did visit bookstores. If you’re already inclined to read prose instead of comics and like the characters, I can see why the novels would be appealing. Lots of Star Trek and Star Wars fans have probably never read those comics either, but they’re more than willing to read the various novels.

All of this brings me to the first in my series of prove novel reviews. Untold Tales of Spider-Man, published in October 1997 and co-edited by Stan Lee and Kurt Busiek expands on the critically acclaimed comic of the era and brings us untold stories from various eras of Spider-Man’s life. Most of the short stories are penned by genre writers, although a few comics scribes make appearances. No one seemed to treat the prose novels as a part of the comics’ “official” continuity, but each story is given a specific back issue reference to show the reader when exactly it’s supposed to take place. (Can you imagine the actual comics being this anal today?) Everyone seems to know and love Untold Tales of Spider-Man the comic book, what about the novel? It’s lived in obscurity for years, but I think it’s worth another look.

i remember reading this back in the day. was a way that i could get around my parents dislike for comic books, but still get my fix. i loved how the book referenced where in the timeline the short story fit.

the venom factor was an exceptionally good book from what i remember; diane duane did a fantastic job with the spider-man/venom dynamic. unfortunately the other two books in the trilogy weren't as good.

I read several of these back when they first came out! Looking at the list you linked to, I know I owned (and probably still own someplace):

The Avengers & The Thunderbolts

I have memories of all the above, ranging from extremely vague to very detailed. The two Iron Man novels in particular really stuck with me for some reason.

One thing I liked about these books was the introduction of SAFE, the domestic U.S. version of the U.N.'s SHIELD. SAFE agent Joshua Ballard figured into several of the books, as I recall -- I think mostly in the ones written by Cox. I'm amazed I remember the character's name since I haven't read any of these books in over a decade.

I was always bugged that the writers of these books never seemed to care too much about keeping them in line with the comics' continuity. I didn't expect or need the comics to acknowledge the novels, but since the novels (unlike the various animated cartoons) seemed to want to take place in the comics' universe, why didn't they do a better job of observing the status quos of the time? They were usually close, but not quite right.

Since comics are always ongoing and novels are written far in advance, I get that it could never be perfect... but they could've at least picked a status quo and declared that the book took place at that time. As it was there were always inconsistencies ranging from little to very large, which were always just enough to bug you.

There was one of these novels that seemed to be an exception, though -- Avengers/Thunderbolts was clearly set after Thunderbolts #25, and as I recall, it fit pretty seamlessly into the comic book continuity of the time. I was very impressed when I read that one, and as a result it's the only paperback Marvel novel I still have on my bookshelf (I kept all the hardcovers because they look nice).

Anyway, it sounds like this "Untold Tales" book adheres strictly to continuity, though I would expect no less from a project edited by Kurt Busiek. The fact that it was set at various points in the past probably helped too.

I look forward to your novel reviews!