X-Men: The Art and Making of The Animated Series - Not Quite a Review 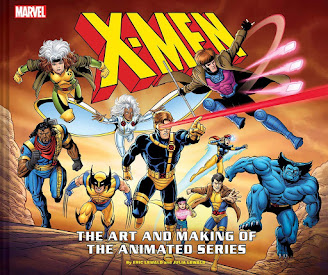 It covers much of the information detailed in Previously on X-Men, their in-depth retrospective of the series, with a noticeable addition. Previously was text, but this is, obviously, an art book. Not only an art book—it’s an extensive chronicle of the making of the show, describing in detail the pre-digital production of television animation in a way I haven’t seen before. But it also provides storyboards, cel art, sketches, background paintings, and very likely, a character model for every figure to appear on the show. Not only the standard character designs, but also every variation of the character.

Remember those few seconds the Blob appeared dressed as a tourist eating ice cream in Season One? It’s there. So is the initial design of Wolverine in his ’80s brown and tan costume—swapped out when Jim Lee revived his previous look in early ’92. This is not a fast read, and it isn’t a quickie cash-in on nostalgia for the show. Its closest comparison is Paul Dini and Chip Kidd’s Batman: Animated coffee table book. Not as “design-y,” but just as comprehensive and carefully cultivated. Fans of the show, or anyone with an interest in the history of animation, should seek it out.