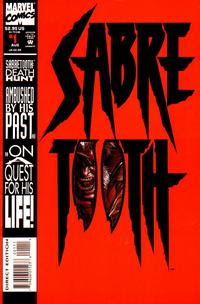 Summary
Sabretooth returns home to his mansion and defeats an army of ninjas. His telepathic assistant, Birdy, gives him a psychic “glow” and tries to speak to his inner child. Sabretooth punches her out for wasting time on the past and walks away. Later, Birdy double-crosses Sabretooth and lets a group of mercenaries inside to kidnap him. When he awakes, Sabretooth learns that his strength has been enhanced by the armored mystery man, Tribune. Tribune is sending Sabretooth on a mission to kill Mystique; if he doesn’t comply, the bomb Tribune planted inside his chest will go off. Sabretooth agrees to kill Mystique, but also promises to kill Tribune when he’s done.

Gimmicks
This issue has a cardstock, die-cut cover.

Approved By The Comics Code Authority
Well, it’s a mini-series about a psychotic killer. Just a few years before this, that probably wouldn’t have gone over very well. There’s violence against women and children, and lots of people get shot or stabbed. It’s never really bloody or visually graphic, though.

Continuity Note
The group of ninjas want revenge on Sabretooth for killing their “Clan Leader”. Silver Fox had previously been revealed to be the leader of Hydra, and Hydra has aligned itself with the Hand in the past, so that might be what they’re referencing.

I Love the ‘90s
In a reference to dated video game terminology, the enhanced Sabretooth is referred to as “Turbo-Sabretooth!”

Review
This is the debut issue of the Sabretooth mini-series, one of the many limited series released in the summer of 1993 to coincide with the X-Men’s 30th anniversary. At the time, Marvel genuinely wanted Sabretooth to join the X-Men (Fabian Nicieza had already hinted that he was joining in an earlier issue of Marvel Age). According to Scott Lobdell, he was able to talk Bob Harras out of doing this, and the storyline was altered to have Sabretooth living as a prisoner of the X-Men. Turning villains into heroes was the latest trend during this era, and it was a pretty ghastly one. I guess after making the heroes as dark as possible, the only place left to go was to sell the villains as heroes. I have no idea if this mini was initially intended to be a part of Sabretooth’s rehabilitation, but the first issue doesn’t leave me with that impression. There’s some attention paid to Sabretooth’s traumatic childhood, but li’l Sabretooth is also shown to be rather nasty. Hama is still writing Sabretooth as an unrepentant villain, even showing us that he deserves his comeuppance at the end of the story. It’s hard to have any sympathy for a guy who decks the pretty girl who wants to help his inner demons. Fitting the exaggerated tone of the story is Texeira’s artwork. Combining photorealism with the excesses of this era is an eccentric look, and not something that would suit a series like Captain America, but it works for a Sabretooth mini.

There’s a shamelessness to the entire issue that I like. The horrible assassin Sabretooth lives in a fabulous mansion, has portraits of his murder victims on the wall, and drinks champagne in the hot tub while receiving some type of psychological pleasure from his blonde sidekick/prisoner. It’s intentionally over the top and suits the character perfectly. I’d rather read this than a comic that portrays Sabretooth as morally conflicted and suddenly remorseful over his actions. Sabretooth, only motivated by money and bloodlust, has simply done too much in his past to be convincingly redeemed. Hama emphasizes this with Sabretooth’s brutal treatment of Birdy. The violence against the ninjas is inoffensive to any reader, but punching the woman who wants to help him makes Sabretooth totally appalling. A monthly series with Sabretooth as the unrepentant lead would get old quickly, and I’d even question the moral judgment behind publishing it; but as a standalone limited series, it works. 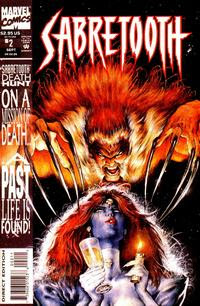 Summary
Sabretooth tracks down Birdy for revenge, but decides not to kill her after she gives him “the glow”. They travel to Paris to kill Mystique, but she manages to elude Sabretooth. When he gets close to her, Mystique morphs into his mother, causing Sabretooth to flash back to his childhood. When he finally reaches Mystique on top of the Eiffel Tower, she reveals that he told her his secrets years ago before his memories were blocked. Mystique then tells him to discuss it with her dinner date, Wolverine.

Review
An entire issue devoted to Sabretooth tracking down two separate women he wants to kill. It’s creepy if you reflect on it, but the fast pace and relentless action make it easier to digest. It would be nice if there was more going on, though. I should point out that Hama is able make Birdy, a background character rarely seen before this series, pretty likable and fun to read. 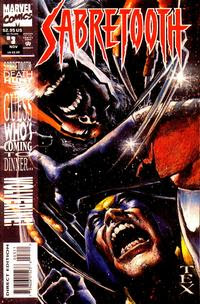 Summary
Mystique convinces Wolverine, Sabretooth, and Birdy to call a truce while she reveals her connection to Sabretooth over dinner. During the Cold War, Mystique assumed the alias of Leni Zauber. Working for separate spy agencies, she met Sabretooth after they were both sent to murder a scientist in Berlin. The two of them hit it off and Sabretooth went AWOL for a month with her. When the body of the real Leni Zauber was found, Sabretooth assumed she was dead and moved on. Mystique tells Sabretooth that they have a son together, and that he’s the one who sent him to kill her. After Mystique detonates a grenade, Wolverine covers it and Sabretooth and Birdy leave to kill Tribune. Birdy uses her powers to track Tribune to an office building in New York.

According to Wolverine, Sabretooth’s first encounter with Mystique happened during their Team X days.

Mystique says that her morphing powers “continually revitalize my body cells and DNA memory”, explaining why she doesn’t appear to age. This is the first comic to establish that Mystique is older than she seems.

Review
Another ‘90s X-comic that reveals the hidden past between two established characters. Just like all of Wolverine’s flashbacks during this era, it’s hard to remember when this once seemed new. I’m not sure why exactly Marvel felt the need to give Sabretooth and Mystique a past together, but I don’t really have a problem with it. It’s much better than inserting yet another character into Wolverine’s backstory, I guess. Just like the previous issues of this mini, it’s a nicely done action comic that doesn’t ask too much of its readers. Wolverine’s guest appearance is totally gratuitous, but I guess it’s inevitable that he would show up in a Sabretooth mini-series. 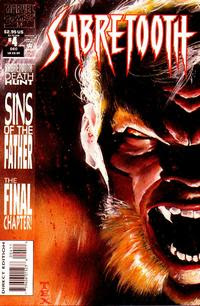 Summary
Sabretooth and Birdy infiltrate Tribune’s building and force his surgeon to remove the bomb in Sabretooth’s chest. When Sabretooth confronts Tribune, he wants to know why he wanted Sabretooth and Mystique dead. Birdy takes him inside his mind, where he learns that Tribune is Graydon Creed, and that his parents’ abandonment led to his hatred of mutants. When Birdy tries to talk Sabretooth out of killing Creed, he recognizes her as Sabretooth’s “escape valve”. Creed fatally stabs Birdy, forcing Sabretooth to live without someone to ease his pain. Convinced that Creed really is his son, Sabretooth lets him live and searches for someone else to provide “the glow”.

Continuity Note
This issue establishes that Graydon Creed is the son of Mystique and Sabretooth. The mystery of his parentage didn’t last long, thankfully.

Approved By The Comics Code Authority
Sabretooth uses his claws to rip open his own chest in preparation for surgery.

Review
Reading the final chapter, it now seems as if Hama was given some continuity points for Sabretooth and worked a story around them. The mini reveals that Sabretooth fathered Graydon Creed, his need for “the glow”, kills off his source of “the glow”, and provides him a motive to search out the X-Men. These are all story points that tie back to the main X-books, and not anything Hama was doing in Wolverine at the time. Hama’s approach to do a straightforward, hyper-violent story clearly hitting each of those points was probably the best way to handle things. Read on its own, the mini is enjoyable simply as an action story, but in the context of X-continuity, it still sets the stage for the next “shocking” storyline. By the time the story is over, it seems as if Marvel had firmly decided that Sabretooth would be getting treatment from the X-Men, but not actually joining the team.

Hama continues with the excessiveness as the series concludes. Graydon Creed doesn’t just have bodyguards; he employs a group of heavily armed investment bankers with “CHK-LIT” (Charged Hyper-Kinetic Lepton Impulse Thruster) guns. At least this stuff is supposed to be funny, unlike many of the other comics from this period. Graydon Creed himself is portrayed as some sort of yuppie supervillain in this issue, an interpretation of the character that never caught on. The ending is rather anticlimactic, and Sabretooth actually choosing not to kill someone, especially after everything Creed has done, just seems wrong. Overall, though, it’s an enjoyable read, and better than most people would expect from a Sabretooth mini-series.
Posted by G. Kendall at 8:20 PM

The first three issues of this were some of the first comics I ever bought. It was the first time I ever went to a comic shop, right around the Return of Superman. Anyways, I finally bought the fourth issue last year on Ebay. I was a little disappointed, though I had always wondered what happened to Birdy.

This series came out a little while before X-Men Unlimited #4, right? Where we learn about Mystique also being, ahem, tightly connected to Nightcrawler's past?

Hama wrote a Sabretooth who was interesting even as he was a psychopath. Not a lot of today's writers can pull that off effectively.

I always thought Sabretooth living as a prisoner in the mansion was a pretty neat idea that went on too long and never got the payoff it deserved (once they came back from AoA, he was docile, until he "healed" and was pyscho again, then...escaped. Not so exciting).

Not sure what a better resolution would have been; I certainly didn't want him becoming a "hero" and joinging a team but I remember it being a lot of fun for awhile there. I did enjoy it when he found himself in situations where he had to help the X-Men for his own survival, like during the Phalanx storyline.