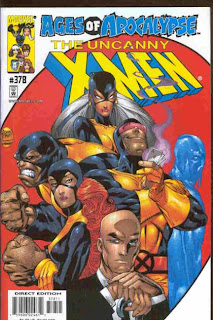 Summary: Jean Grey relives her first meeting with the X-Men, only the team now consists of Storm, Beast, Iceman, and Gambit. The team travels to a circus, where Colossus is a sideshow freak. Magneto’s Brotherhood of Evil Mutants, consisting of Polaris, Sunfire, Rogue, and Marrow, arrive to recruit Colossus. Nearby, a mob is chasing Cyclops. Jean rescues him, and he tells her that this is a false reality created by Apocalypse. When his body suddenly morphs into Apocalypse’s, the X-Men attack. The unstable energies around him explode, returning the mutants to reality. Xavier claims that Cyclops never truly existed in the false reality, which angers Jean.

Review: Yes, this crossover really is called “Ages of Apocalypse”. The original idea was that all of the mutants present in Apocalypse’s chamber have been shifted into different realities, but Marvel botched the idea by dragging Wolverine into the event. Wolverine wasn’t with the rest of the X-Men during the previous storyline, so there’s no reason for him to be experiencing an alternate reality. His solo title just used the event to do a riff on the “New Fantastic Four” gimmick (none of those characters were present either).

Davis stays loyal to the premise, remaking the original X-Men from the characters available to him. Gambit takes Cyclops’ place on the original X-Men, presumably because they both have red eyes (this might’ve also been a hint that he’s the third Summers brother, which is where Claremont apparently wanted to go with the idea), and Storm replaces Angel, I guess because both can fly. The Brotherhood is remade with heroes who were once villains (well, labeling Sunfire and Polaris as villains is debatable, but Sunfire’s always been antagonistic, and Polaris was possessed by the villain Malice for years), casting Rogue as Mastermind, Sunfire as Quicksilver, Polaris as Scarlet Witch, and Marrow as Toad. This is really just an excuse to put the characters in the wrong outfits, and Kubert pulls it off well. Polaris in Scarlet Witch’s original green costume looks surprisingly natural, and the hideously ugly version of Marrow in Toad’s outfit is just absurd enough to work. The basic plot is a riff on the Blob’s first appearance, only now Colossus is the circus freak discovered by Cerebro. All of this is fun, but I have no idea what the point is supposed to be. Why on earth is Apocalypse warping reality into a pastiche of the Lee/Kirby issues of this book? I guess you could argue that he’s being influenced by Cyclops, but there’s nothing in the story to indicate that. Really, the ongoing storyline about Apocalypse just stops for an unrelated alternate reality story. Davis has some clever casting choices, but it’s an odd detour to take. 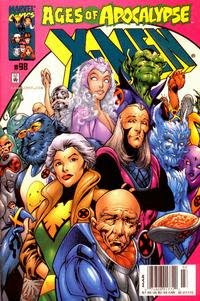 Summary: In the year 2099, the X-Men are an interplanetary organization. Phoenix returns to their global base and learns that Xavier is near death. She reveals to Storm that they grew apart after Cyclops’ death, while Storm tells her that Xavier never forgave himself for asking Cyclops to rejoin the X-Men. A Shi’ar scientist unveils a healing pod that might save Xavier. The X-Men combine their powers to charge the pod, but it’s revealed as Apocalypse’s new power conduit. Apocalypse returns to the past, charging himself with temporal energy. The conduit explodes, forcing Apocalypse to teleport away. Phoenix asks Xavier if he felt Cyclops inside Apocalypse, but he doesn’t respond. Later, Xavier watches Phoenix leave the mansion, wondering if they’re destined to grow apart.

Continuity Notes: According to Apocalypse, the 2099 scenes aren’t an illusion, but the actual future. He’s shifted time and space so that he can take advantage of the X-Men’s “frailties” at the end of their lives. This doesn’t quite work, since Xavier is the only character that’s actually dying at this time. Most of the X-Men appear to be middle-aged, due to medical advances in the future.

Phoenix mind-scans Apocalypse during their fight and still senses that Cyclops is inside, working to sabotage him. A few months later, Marvel released the X-Men: Search for Cyclops miniseries. Future president Bill Jemas cited it as an example of what was wrong with the X-office, claiming it was a rip-off to kill a character that everyone knew was coming back anyway.

Gambit and Marrow are married in the future, which might be viewed as a sign Davis really was trying to build a relationship between the pair. The healing pod used on Xavier resembles the one Gambit used to save Marrow a few issues earlier, which is a nice callback. Rogue, for some reason, hasn’t aged at all in a hundred years, and is now in control of her powers. Storm is now a weather elemental. X-Man now resembles Cable, and Cable is fully mechanical.

Miscellaneous Note: The cover to this issue features the same characters in the same poses as this month’s UXM issue.

Creative Differences: Alan Davis campaigned against Cyclops’ death, as seen in this fax sent to the editors.

Review: This is the very rushed, rather unsatisfying, conclusion to the big “end of the millennium” Apocalypse storyline. I actually like the scenes set in the future, and think Davis does an admirable job of connecting it to the previous issues of his run. Davis’ art is elegant as always, and the world building he manages to pull off in just a few pages is pretty impressive. There’s also a conflict set up between Xavier and Jean, which is something the books had never tried before. Making Xavier aware that he’s destined to grow apart from Jean adds some weight to the ending, and Kavanagh’s script actually manages to pull the idea off. Killing off Cyclops right after Xavier asked him to stay with the team could’ve created some interesting story threads for Xavier, also. However, this is all pointless, since Cyclops returns less than a year later, thus negating all of the conflict.

As entertaining as the future scenes are, they’re really just taking away space from the big X-Men/Apocalypse confrontation. Apocalypse has just killed Cyclops by stealing his body, and the story fails to make this feel like anything approaching a big deal. The team never even gets to fight Apocalypse; his power conduit explodes and he just teleports away (all in the course of one page). It’s rushed, anti-climatic, and just feels half-hearted. The “Ages of Apocalypse” gimmick was obviously supposed to recall fond memories of the ambitious “Age of Apocalypse” event, but it seems like an editorially-driven idea that just mangled the ending of the actual storyline (and anyone looking to these issues for more AoA was bound to be disappointed anyway). Apparently, Marvel couldn’t decide if they really wanted to kill Cyclops off or not, so Davis has to keep the door open for his return and just get rid of Apocalypse as soon as possible. It’s a copout, and it’s a shame that a storyline that was so clearly mapped out at the beginning just fizzles out at the end.

Your assessment covers just about all I remember thinking at the time these issues came out. Editorially-mandated events are one thing, but tacking one onto the end of a big story (which was also editorially-mandated) in a way that robs that story of a proper conclusion -- it makes absolutely zero sense!

I remember being puzzled by this mini-event -- I almost thought I'd missed some one-shot or special or something that explained it and wrapped up "The Twelve" -- but such was not the case.

I've never seen that fax Alan Davis sent before -- it's terrific! I like that even though he's been drawing Jim Lee Cyclops throughout his run on the title, he defaults to the classic Cockrum/Byrne Cyclops for "private" doodles like that.

All these years, and I never noticed that the covers of these two issues mimic one another...

Yeah, this "crossover" always felt off to me, too, like I missed an issue at the beginning or the end that wrapped up the Twelve storyline and explained what the heck was going on. As standalone issues, they were kind of fun and well crafted, but as a coherent storyline that resolved a previous one, not so much.

And as a huge Cyclops fan (and the kind of fan Cyclops describes therein), I LOVED that fax.

I had stopped reading X-men for a couple years and restarted with these two issues. I kind of liked the concept but was always confused what was going on.

Weirdly I thought the Search for Cyclops mini, and the couple issues of Uncanny and X-men that came after that dealing with Cyclops were a much better conclusion to this arc then anything the story arc itself accomplished.

Excalibur was a one-two punch of Claremont and Davis. Claremont would occasionally write some fantasy/alternate reality stories, and Davis followed along in the same vein. So, 'Ages of Apocalypse' is not exactly 'unexpected' of Davis, or even the X-Men. Part of the problem is 'The Twelve' had such a superb tease early in X-Factor. The actual resolution, over a decade later, lacks all interest. The only reason to care about this story AT ALL is because Grant Morrison writes about Scott Summers dealing with how Apocalypse had taken over his body and mind. Don't you want to know how that happened? I mean, Apocalpyse is a big baddie, and his stories are usually great. After reading this, you still don't know what happened. Ages of Apocalpyse does nothing to move the plot forward, and the actual conclusion (Search for Cyclops mini-series) isn't even part of the main books. I don't care much for the fantasy/alternate reality stuff (it should stay in annuals and summer specials), but that doesn't mean I dislike Alan Davis. However, the writing leading up to this, and then this actual storyline, are the absolute worst. I could be happier reading Todd McFarlane's never-resolved storylines in Youngblood! Happier reading Marvel's New Universe titles.

Claremont didn't have any planned connection to the Summers family. He actually intended for Gambit to be a creation of Mr. Sinister's. The idea of a third Summers brother was introduced later by Fabian Nicieza, but Fabian wasn't planning on making Gambit said brother, either (at least not originally). He wanted it to be his creation Adam X the X-Treme.

In X-MEN: THE END, Claremont revealed that Gambit was genetically another Summers brother, thanks to Sinister's experiments. (That's my memory at least; I haven't read the series in years.) I know that Claremont didn't introduce third Summers brother plot, and that he always intended Gambit as a spy for Sinister, but at some point he decided to do his own riff on the concept.