After an abrupt change in editorial, and the movement of David Michelinie to Amazing, Web of Spider-Man returns to a stretch of aimlessness. Most of these issues are simply filler and aren’t that interesting, so I’ll go through them as quickly as possible with capsule reviews.

Beware the Stalker from the Stars! 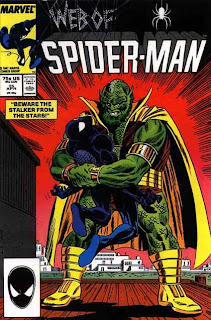 Well, just look at that cover. You know you’re in for a classic Spidey story, right? This is another Larry Lieber inventory story, which has Spider-Man locating an alien weapon that’s landed on Earth. With the help of a pacifist alien that’s followed it here, Spidey defeats the green guy on the cover. Also, Aunt May gets mugged, but Spidey manages to retrieve her broach…from the same crook who initially found this alien plot device. What are the odds? Lieber’s previous fill-in was tolerable, but this one should’ve stayed in the drawer. For the record, the Statement of Ownership has yearly sales at 264,500 with the most recent issue selling 239,225 copies. 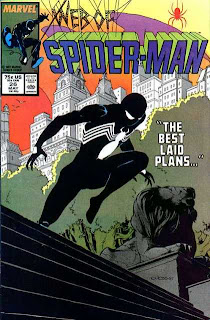 It’s an “untold tale of Spidey’s past,” back from the days of his red and blue costume, and that apartment with the cigar store Indian and Star Wars poster. It’s hard to tell if this sat around for years, or if the story was intentionally set in the past (I’m not sure if any of these creators were working for Marvel in the early ‘80s). The cover was clearly pulled from inventory, though. There’s a nice hook for this story, as soft-touch Spider-Man falls for a crook’s lie and lets him go, only to later realize he stole $50,000 from a famine relief charity. The crook soon seeks Spidey’s help, as his older brother targets him after his sibling tried to pin all of their crimes on him. Exposure to chemicals has caused Spidey’s spider-sense to go haywire, but he decides he must keep going, of course. Tom Morgan draws a fine Romita-style Spider-Man. He goes on to design the U.S. Agent costume in Captain America, and then undergoes a ‘90s makeover in Iron Man and the 2099 books, I believe. 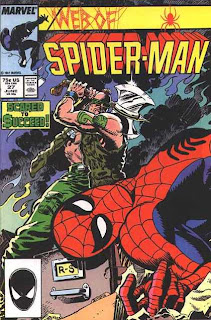 There isn’t an editorial footnote placing this story in the past, although it not only features Spidey in his red and blues, but Dave Simons goes out of his way to draw the costume Ditko-style. Notice that the spider-legs on Spidey’s chest emblem are all pointing down, which was a huge no-no by the 1980s. Peter also has a 1985 calendar on his wall, so I’m assuming this was another one pulled from the drawer. In this issue, Spider-Man faces Headhunter, a white knockoff of Mr. T (not to be confused with New Mutants villain Axe, the other Marvel Universe Mr. T clone). Headhunter works for the mysterious ESI corporation, which promises to help executives get ahead in business. The only catch is their contract, which demands things like the CEO’s firstborn child if their business slumps. Spidey spends the issue protecting an auto CEO and his son from Headhunter, who literally keeps the heads of his victims in jars on display (McFarlane should’ve revived him for his grim ‘n gritty Spider-Man series). It’s as silly as it sounds, but I guess we’re lucky this random inventory issue didn’t have any aliens in it.

Was this good, bad, or average for that era? Those numbers would be Top 10 in the early 90s, I think (or at least Top 20), and today's creators would kill for those numbers, but I have no idea how what titles were selling in the 80s.

Who did the cover for # 26? I can't tell from the signature, but it looks good.