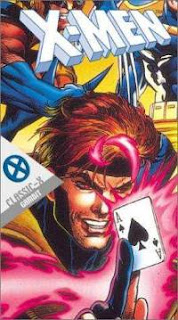 X-Ternally Yours
Written by Julianne Klemm

Summary:  Gambit returns home to Louisiana after his brother Bobby is kidnapped by the Assassins Guild.  He agrees to marry the leader of the Assassins, Bella Donna, in exchange for Bobby’s freedom.  However, Bella Donna has given Bobby a fake tithe to give the External during her ceremonial tithe gathering, hoping that the External will destroy the entire Thieves Guild as punishment.  The X-Men follow Gambit to Louisiana and reveal Bella Donna’s plot to the External.  She spares Bella Donna’s life, but strips her of her powers.  Freed from his oath, Gambit returns home with the X-Men.  Meanwhile in the Savage Land, Barbarus attacks Xavier and Magneto.

“Um, Actually…”:  Gambit and Bella Donna wed as teenagers in the comic, in an arranged marriage designed to bring the Guilds together.  The truce was broken when Gambit inadvertently killed Bella Donna’s brother during a duel, which lead to him abandoning home and eventually joining the X-Men.

Approved By Broadcast Standards:  Gambit remarks that “They’re going to waste my brother.”  “Waste” was a popular replacement word for “kill” during this era of action cartoons, although Gambit does go on to say “kill” twice during a tirade on the futility of the Guilds’ rivalry. 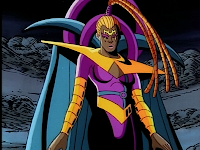 Review:  I’ve enumerated my disdain for the Thieves Guild and Assassins Guild before.  The Externals aren’t that great a concept, either, but at least there’s some potential there.  But the Guilds are just a horrid idea that's lingered for twenty years now in the face of overwhelming apathy.  They live in the swamp, dress like Dokken roadies, and play the role of pawns for an immortal mutant in order to obtain powers…powers they apparently never use to do anything.  And there’s some Montague/Capulet (or perhaps Hatfields and McCoys) feud that’s also supposed to drive this nonsense, but I’ve never encountered anyone who’s cared.

As far as Guild stories go, I guess this isn’t any dumber than any of the comic stories, but the producers have somehow made Bella Donna even more unlikable than the comics ever did.  She’s a jilted lover in the source material as well, but here there’s no reason whatsoever for Gambit to have ever cared about her.  Bella Donna can almost work as a character when she has a legitimate reason for hating Gambit, but if she’s just shrill and possessive all the time and an eager participant in the Guild wars, then she’s the worst kind of cartoon supervillain.  And for a story that’s just begging to be about Gambit and Rogue’s relationship, there’s surprisingly little focus given to Rogue throughout the episode.  And, yes, I realize I just suggested making a story better by focusing on Gambit and Rogue’s relationship…that’s how dreary this one is.

Credit to http://marvel.toonzone.net/xmen/ for the screencaps.

I'm with you on the rival guilds thing. I hated this episode when it aired because it was so freaking dull. I digress, I got caught up in the endless mysteries and shadowy figures of the 90's, so a straight story about a character's past without someone like Sinister or Apocalypse pulling the strings didn't hold as much of my interest. Even still, these concepts were lame. Another group of weirdos living in self-made primitive society that everyone just wanted to see die (add them to the Morlocks, Shi'ar, etc. and a bunch of other groups who just never go away).

I hate to say this, but I think it goes to show that the X-Traitor plot line (or at the very least, his completely unknown past and intentions) really was the most interesting thing about Gambit. I don't know if he could have had a more interesting back story or if maybe it's best not to reveal it (hello Wolverine), but this is boring. It's tough because he's a thief and therefore should be involved in thief stuff, but it's probably best left as something we occasionally hear about instead of see.

Yeah, despite my penchance for nostalgia and the fact that the issue which introduced Bella Donna was the first issue of X-Men I bought regularly, I have zero affinity for any of the Guild stuff and/or Bella Donna in general.

I think it could work in a different setting/genre, but it just seems so thematically out of place amongst the X-Men in the ostensibly present day.

It's amazing how some character baggage works and some just doesn't, isn't it? Wolverine's constant Japan, Madripoor, Alpha Flight and ninja shit weren't much of a thematic fit with the X-Men, but people ate it up. They're still eating it up. I know, different time, and Wolverine was quickly becoming a breakout solo character (something Gambit has never really pulled off), but it's all been dragged into the team books time and time again. But it works. Odd, considering that Wolverine and Gambit both played the "mysterious maverick" role. I guess Wolverine just did it first and did it better.

I also really think Gambit was hurt by twenty some years of boring, simpering love affairs. Wolverine has a long trail of lost loves and dead girlfriends too, but it was never the focus. The Gambit and Rogue pairing was melodramatic garbage the entire time it went on and it really put the breaks on the character. I think the trick to staying interesting is, your girlfriend has to be dead, preferably murdered by your worst enemy, or better yet, yourself during some kind of mind control. If she's still alive and wines for twenty years about not being able to touch you, well, good luck being the kids' favorite.

The thing about Gambit was, Claremont had a different idea for who and what the character was, and dropped hints about it. Once he left, Jim and the people who followed him seemed to have different ideas, and it turned out to not be that successful.

For what it's worth, I never hated the ideas of the Guilds, it's just that the execution was extremely lame.

Also, Rogue and Gambit weren't that bad initially. They started out kind of fun and interesting (see X-men Unlimited #3), but sometime around Fatal Attractions, Nicieza and everyone after decided the two of them would just be about ANGST! ANGST! ANGST!

Yeah, I didn't mind their relationship at first. There definitely was some potential in the idea of the suave ladies' man falling for the girl who can't be touched.

The problem arose when every writer continued to do little with either character beyond beat that same drum over and over and over for years.

With regards to the Guilds, I think that Kyle and Yost did an okay job in the X-Force: Sex and Violence mini they did a few years back. I say think because I've only read it once, and I can't remember much about it. Like I said, I think it wasn't too bad. Looking at solicits, it looks like Scarlet Spider has also had some stuff to do with them recently.