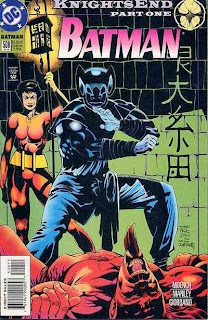 Summary:  Shiva dons the mask of Tengu and kills a martial arts master in combat.  His seven former disciples, now masters, vow vengeance.  Later, Shiva tells Bruce Wayne to don the mask to complete his training.  He soon realizes that he’s been framed for murder and each of the seven masters will pursue him.  Bruce brings the first defeated master to Shiva, unaware that she’s going to kill him.  After defeating the second master, and realizing that Shiva killed the first, Bruce lets him go free.  Meanwhile, while stopping a gun running operation, Batman comes across a medallion once owned by LeHah.  He swears vengeance.

Irrelevant Continuity:  Batman lists Jigsaw as one of the menaces he’s stopped since taking over the role.  He’s referring to the Marvel villain, I’m assuming, who appeared in the two Batman/Punisher crossovers that occurred in the early ‘90s.  This is one of the very few explicit references to a Marvel/DC crossover ever made in a regular monthly title.

Total N00B:  The goons working for the gun running operation talk about someone named LeHah, who apparently ran a munitions operations now overseen by another mystery figure, Selkirk.  Jean-Paul recognizes LeHah as “the master of the System” as the story has a one-panel flashback to the Sword of Azrael miniseries.

Review:  This issue marks the beginning of “Knightsend,” the final crossover of the Jean-Paul Valley era.  To mark the launch of “Knightsend,” every Bat-title released this month was double-sized, even though some of the chapters arguably didn’t need the extra length.  When the month is over, you’ve consumed a lot of Bruce vs. Ninja pages.  This chapter actually holds up pretty well, thanks largely to Mike Manley’s knack for drawing martial arts action.  Doug Moench also has a clever opening to the issue, as we discover that the ninja master Shiva has engaged in combat truly is an expert in “unarmed” combat.  The ending is also strong, as Moench has Bruce stand at the edge of a skyscraper, unable to perform the classic Batman-swinging-from-a-rope move we’ve all seen a thousand times.

The main problem with the issue is Bruce Wayne’s willingness to go along with Shiva’s plot in the first place.  As soon as he discovered she murdered the original master (“murder” might be too strong a word, but she is responsible for the death of a man who’s not obviously guilty of anything), Bruce should’ve done everything in his power to apprehend her.  Instead, he plays along with her game, and even stupidly brings her the first of his opponents after he defeats him.  After she kills him for no real purpose, that makes Bruce indirectly responsible for two deaths.  That should bother him, but he’s pretty unemotional about the affair.  I understand that the storyline is supposed to show how far Bruce is willing to go to get back into the condition he needs to be as Batman, but he just comes across as too passive and annoyingly out-of-character.