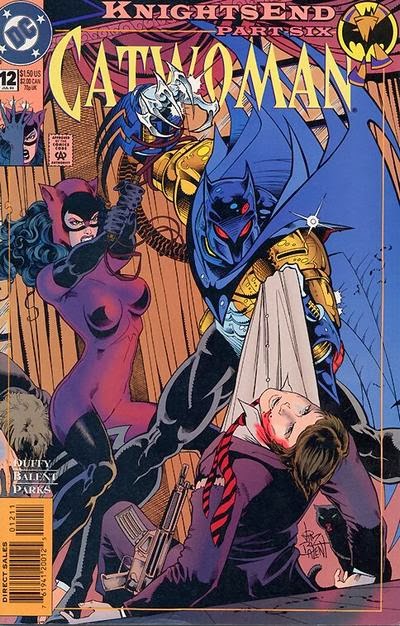 Summary:  While Bruce regains his confidence as Batman, Catwoman searches Selkirk’s property for the cybernetic enabler.  Jean-Paul arrives, looking to force Selkirk into revealing LeHah’s location.  After making her way through numerous guards, Catwoman reaches Selkirk.  She’s quickly cast aside by an enraged Jean-Paul.  Suddenly, Jean-Paul notices one of Selkirk’s associates and blames him for his father’s murder.  At that moment, Batman arrives with Robin and Nightwing.

Total N00B:  Selkirk, LeHah, the cybernetic enabler, Brendan O’Boyle, the true murderer of Jean-Paul’s father…none of these characters or concepts are actually explained in the issue.

Production Note:  The name “Parks” is listed in the inker’s slot on the cover credits, but the inking this issue is actually credited to Rick Burchett.

Review:  The opening of this issue is quite nice, paying off six issues worth of set-up and finally allowing Bruce to bravely leap off Gotham Tower as Batman.  The double-page spread of the Gotham skyline might ordinarily seem gratuitous, but it works in the context of the overall storyline.  Plus, it’s lovingly rendered by Jim Balent and Rick Burchett, who’s a fantastic inker and probably the best artist to work on the Batman Adventures series.

That scene has nothing to do with Catwoman, though, who first appears in the issue torturing a generic thug with a gigantic ‘90s cybernetic arm she’s somehow acquired.  I’m sure that regular readers of her title could actually appreciate the context of her adventure this issue, but all I know is that she needs a macguffin for a character whose name I vaguely remember.  And then Jean-Paul shows up, acting just as crazy-yet-boring as usual.  He finally meets Selkirk, another vaguely defined character that’s never developed in any of these reprinted stories, only to learn that his father really is dead.  That’s okay, because he instantly recognizes Selkirk’s meek assistant as his father’s real killer after all (But didn’t he believe his father alive up until the previous panel?), so now he wants to kill this guy, who we also know nothing about.  This is beyond annoying by now.  At this point, I can’t even tell if the reprint collection is skipping important chapters again, or if these issues were always kind of a mess.