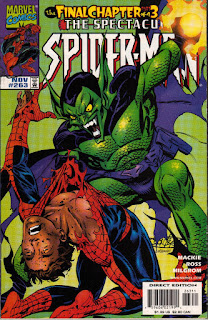 The Triumph of the Goblin!  The Final Chapter Part 3
Credits:  Howard Mackie (writer), Luke Ross (penciler), Al Milgrom (inks), Mike Rockwitz (colors), Comicraft (letters)
The Plot:  The Green Goblin knocks Aunt May unconscious, then abruptly decides to let Spider-Man escape with her.  Spider-Man takes May to Reed Richards to determine if she is truly his aunt.  While examining her body, Reed discovers a tiny implant in May’s brain.  Spider-Man charges into Norman Osborn’s office and demands he reveal what he’s done to May.  This leads to a Spider-Man/Green Goblin battle over the streets of Manhattan.  The Goblin boasts that he implanted a trigger in May’s brain that will set off DNA bombs around the globe if removed.  Eventually, the Goblin crashes Spider-Man into the Daily Bugle building.  He assaults the building with pumpkin bombs before unmasking, and killing, Spider-Man in front of the Bugle staff.
The Subplots:  MJ is having a celebrity-filled party at the Parkers’ home to celebrate her return to modeling.
Web of Continuity:
Forever Young:  The Invisible Woman refers to Spider-Man as a “young man” when he arrives at the Fantastic Four’s headquarters. 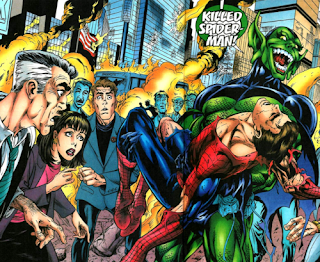 “Huh?” Moment:  “When your aunt had her stroke, and before I realized that I was alive, I decided to seize upon the opportunity to add to your troubles.”  Before I realized that I was alive…what is Norman Osborn talking about?!
Miscellaneous Note:  The Statement of Ownership lists average sales for the year at 99,059 copies, with the most recent issue selling 93,061.  Spectacular Spider-Man seems to be the lowest selling of the monthly titles, at around 10,000 copies less than the other books.
Review:  Unlike Amazing and Peter Parker, this really is the final issue of Spectacular Spider-Man.  The book will be replaced in a few months by Webspinners, a monthly in the vein of Legends of the Dark Knight, telling stories from different eras of Spider-Man’s past.  Traditionally, anthology books don’t sell, and neither do books set in the past, so I’m not quite sure what Marvel was thinking with this move.  Webspinners was a critical hit in its early months, however, until the book turned into a showcase for seemingly random creators, and eventually, just another Spidey comic written by Howard Mackie.
Howard Mackie has never been associated with Spectacular Spider-Man before, but there’s no pretense that this issue is a true farewell to the series, is it?  It’s the penultimate chapter of a crossover designed to bring this era of Spider-Man to a close, and apparently having Mackie write 3/4th of the storyline was the easiest option for everyone involved.  And, not surprisingly, it’s just as garbled and nonsensical as you would expect after reading his work in the previous issues of “The Gathering of Five” and “The Final Chapter.”  This issue is particularly insane since it’s tasked with justifying the resurrection of Aunt May.  I defy anyone to tell me that the “genetically altered actress” solution was a good idea.  I’m not debating whether or not Aunt May should return, I’m talking the specific choice made this issue.  An actress was somehow convinced to alter her DNA and play the part of Spider-Man’s elderly aunt, play that part so perfectly that Peter never suspected she was a fraud, and then die on cue?  This is essentially the height of “eh, whatever” storytelling, isn’t it?  Marvel wants Aunt May back, so screw it, here’s a few lines of dialogue to justify it.  (This absurdity doesn’t even merit its own flashback; it’s just a series of overwritten word balloons shoved into a fight scene.)  If you’re going to be this lazy, why not just say it was a clone that died?  Yeah, Marvel was petrified of associating the titles with clones again during this period, but what’s the point of introducing Miles Warren into the plot and then copping out with a genetically altered actress?  If you’re going for a copout, at least go for a less painful one. 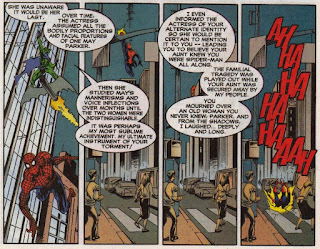 When the story isn’t trying to justify the most idiotic resurrection in the history of superhero comics, or having Osborn elucidate even more ridiculous schemes, it’s killing time with another Spider-Man/Goblin fight scene.  Luke Ross might’ve been able to do something with the action, but unfortunately the pacing of the issue reduces the fight scene to a series of sterile, tiny panels.  For the majority of the issue, the pages are crammed with 6-8 panels, and just packed with utterly wretched Norman Osborn dialogue.  I swear, if there’s an affectation more annoying that Osborn calling any male in his vicinity “m’boy” I’ve yet to read it.  Osborn’s verbal diarrhea is so bad this issue that there’s an entire drawing of Spider-Man that’s literally covered up with an overwritten balloon filled with banal Norman Osborn dialogue.  I initially thought that the issue was unusually compressed because Mackie has so many plot points that need to be shoved in, which is partially true.  However, the story also has to make room for a giant two-page spread on the final pages, dedicated to selling the laughable cliffhanger that Osborn’s killed the unmasked Spider-Man.  Those two pages are of course a cheap fake-out, but they look pretty darn impressive.  It’s amazing that no one seems to have realized at this point that Ross excels at large figures…he is drawing upon McFarlane, of course.  Why was he given an issue filled with postage stamp-sized images to draw?  And why were the readers saddled with such wretched content in the first place?
Posted by G. Kendall at 2:19 PM

I agree, they should've just manned up and had the dead May be a clone. It would've been cleaner and easier to buy.

But really, they should never have brought her back in the first place. Apparently Mackie was against it; it was he and DeMatteis who pitched her death in the first place. But Bob Harras wanted May back to go with the "back to basics" relaunch, so here she is.

Byrne compared this to the time in the sixties when the Batman comics killed off Alfred then brought him back because they realized the series "didn't work properly" without him. I would agree with this point regarding Alfred, but not regarding Aunt May. She had been a nonentity in the books for a decade or more at this point, and I don't think anybody missed her!

Personally, I firmly believe May has added nothing to Spider-Man's mythos since Steve Ditko left the character, and writers only keep her around out of some weird belief that she's "supposed" to be there.

(That said, I enjoyed some Aunt May stuff over years, but I don't believe my life would be poorer if I'd never read any of it. I don't hate the character or anything; I just think she's unnecessary and I don't miss her when she's gone.)

Had they never brought back Aunt May, we would have never had to deal with the "Brand New Day" story-line.
That would have been a real positive.

I think Aunt May added to the Spider Man mythos in to the early-1980s. Amazing Spider Man #400 was such a great story though, that it should have been allowed to stand. It was the one shining moment of the Clone Saga era.

I think there's been some good Aunt May moments since she was brought back, but I wouldn't say that they're so essential that she needed to be brought back. I definitely would have preferred that she stay dead.

On "m'boy" - here's an entire article on Osborn's use of the phrase!

So Osborn's plan was to make Peter suffer by having Fake Aunt May die? If Peter didn't know she was a fake, then what was the point of kidnapping and caring for the real Aunt May? Why not just have the real Aunt May die? Peter's reaction would be exactly the same since he believes them to be the same person! Osborn was laughing hard and long from the shadows, all while the real Aunt May was locked up in his hideout. Except Peter had no reason to assume this was the case, so what exactly was he laughing at?

Please tell me his plan wasn't to reveal that he had the real Aunt May and then kill her too, just to make Peter go through the whole thing twice.

Is there any reason Peter didn't, at this point, just get a gun and shoot this bastard in the head? Power and responsibility and all that; I think anyone could argue that the most responsible thing to do would be to put this lunatic down now before he takes anymore innocent lives. I know, comics...

To be fair, the idea wasn't that the actress agreed to die- it was that she didn't realize Osborn had poisoned her. The problem is that Amazing 400 makes it clear that at least 10 minutes passed between "May" realizing she was dying and May actually dying, raising the question of why the actress didn't spill the beans as soon as she realized she was dying, especially since she probably suspected Osborn poisoned her.
@Anonymous- the previous chapter suggests that Osborn originally planned to frame Peter for poisoning her but things didn't go as planned. To be fair, it would be a lot easier for Osborn to frame Peter for poisoning her if she was at home then if she was at the hospital.

So... DeMatteis began the "m'boy" affectation (or brought it back, I guess, from a handful of Stan Lee uses)? Weird, I've associated it forever with Mackie, probably because he overused it so much (especially in that AMAZING/PETER PARKER crossover around issue 25 of the relaunch).

"When your aunt had her stroke, and before I realized that I was alive…what is Norman Osborn talking about?!"

He actually says "When your aunt had her stroke, and before I revealed that I was alive..." So at least a small part of the issue now makes a bit of sense.