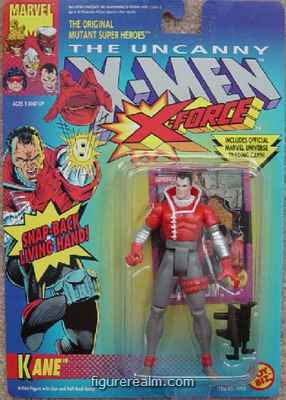 This Kane action figure is apart of Toy Fare's 1992 X-Force line. Aside from Kane, I also picked up Stryfe, Shatterstar, and Deadpool when I was around 12. I was past the age where I really cared about action figures, but I thought it was cool to see Marvel characters as toys, which hadn't happened since the Secret Wars line in the early '80s. I could be wrong, but I think Kane was made into an action figure before the Silver Surfer was. That should shake your belief in something, at least. Aside from his snazzy red jacket, Kane also comes with a voice chip that says "Get-Into-The-Groove!" repeatedly.*

Image courtesy of Figurerealm. You can check out the rest of the early '90s X-Men line there.

I think Silver Surfer may have had a toy first, as part of a Marvel wide line that Toy Biz put out before the X-Men/X-Force toys.

This was late 80s/early 90s (I seem to recall buying them around the same time I was buying the first Burton Batman movie toys, so 89-ish?) so I'm pretty sure it predated the X-Men stuff. However, while I know there was a Silver Sufer toy in that line, I couldn't swear that specific figure came out before Kane's.

Incidentally, I just found your blog last week and have caught up. My story is very similar to yours: we're about the same age and 90s X-Men comics were my bread and butter.

X-Men 8, Uncanny 289 and X-Factor 78 were the first three comics I bought and then continued to buy each subsequent issue (and of course, slowly going backwards as well, filling in gaps). It started something that slowly expanded to include many, many other comics of all sorts that continues to this day. Could I have picked odder issues to start with? (Though I'll admit the picnic stuff in X-Men 8, with all the babes in bikinis and such, did a lot to titilate my 12 year old self...)

Anyways, I am enjoying this sometimes fond, sometimes cringe-worthy walk down memory lane. How far do you plan on going with it? I have no desire for you to stop anytime soon. Keep up the good work!

The Silver Surfer figure was part of the Marvel Super-Heroes line which debuted around 1990. He had a surfboard that you could pull back to make it zoom off into the depths of space... or the kitchen table (whichever came first).

The Kane figure came out sometime in 1992. I remember picking it up during my freshman year of college and thought the retracting hand was a pretty lame gimmick. I would have preferred a hand that shot out but so would have America's legion of trial lawyers I guess.

Kane may have been lame but that Deadpool figure with his retractable knife and two katanas still kicks ass.

Thanks for the comments. I bought most of the x-books up until Onslaught, so I'll at least go to that point.