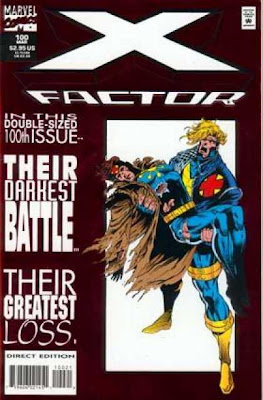 Summary
Havok tries to convince Wolfsbane not to join Haven, but she refuses. Haven reveals her plan to have a satellite electromagnetically stimulate the fault lines in California, creating earthquakes that will kill most of its residents. She sends X-Factor into “oblivion”, psychologically examining each member. They return to reality, trapped in a cell that repels their powers. Haven’s brother, Monsoon, and Val Cooper arrive. They reveal that they’ve been working undercover for months to stop Haven. One of Madrox’s duplicates appears with Haven’s men and attacks. Guido and Random hold them off while Polaris stops the satellite in the sky and Havok destroys it. Madrox, succumbing to the Legacy Virus, asks Haven to cure him. Havok reluctantly agrees to let her try, but Haven is unsuccessful in saving his life. Haven says that “He” has spoken to her, and that the Legacy Virus will be a crucible for mutants, with the survivors forming the basis of the “New Humanity”. Haven flies away as the team mourns Madrox.

Gimmicks
This issue has a red foil cover with raised Havok and Madrox figures.

Continuity Notes
Random’s body turns into a shapeless blob after being sent to “oblivion” with X-Factor. Polaris asks him why his body changed when no one else’s did, but he refuses to answer.

The two duplicates of Madrox with distinct personalities are missing by the end of the story without explanation.

Review
X-Factor #100 finally accomplishes what Marvel wanted to do since the Peter David run, the death of Madrox. I have mixed feelings about this issue. Duursema’s art is fine, incorporating just enough of the ’90s look without getting ugly, while also clearly telling the story and selling the emotions. DeMatteis’ interpretation of Haven is still interesting, and the twist with Monsoon and Val Cooper isn’t too obvious so it works pretty well. DeMatteis incorporates Madrox’s illness, another subplot he inherited, into the Haven storyline, which doesn’t work as well as the conclusion of the Wolfsbane subplot. Having Haven cure Wolfsbane is a good misdirection for Madrox, giving the reader false hope that he’ll be saved too, but choosing Madrox as a sacrifice to the Legacy Virus doesn’t work. Not only does he develop two sentient clones in this storyline, but they also play a large role in this issue…until they just disappear off-panel. Killing off Madrox conclusively would have been hard enough, since anyone could just reveal that he had long-lost duplicate, but introducing two independent duplicates in this storyline and just forgetting about them makes it even more unbelievable. It’s another example of how half-hearted the Legacy Virus storyline became. Marvel decides to infect an actual member of an X-team, but they choose a character whose powers give them the easiest “out” for a resurrection. They’re trying to have it both ways – a (somewhat) major character dies, but he’s also the one X-character who can be resurrected the easiest. This lack of commitment to the idea is what leads to the Legacy Virus story becoming such a bomb. In terms of this specific issue, Madrox’s death only occurs in the final four pages, giving this issue a rushed ending as Haven suddenly declares that the Legacy Virus is all part of the master plan and just flies away. After such a long build-up, it’s a disappointment.
Posted by G. Kendall at 8:23 PM

Another X-Factor I have good memories of. The showdown with Haven was a bit anticlimatic, but the death of Madrox, I thought at the time, made up for it. In retrospect it is blatantly obvious why they are killing him off, but still, it was a pretty good way to go!