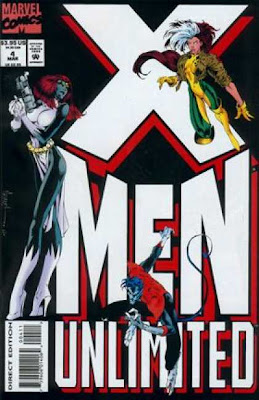 Summary
Mystique murders a General who has been providing support to the Friends of Humanity. Graydon Creed learns about the death on the same day a private detective confirms that Mystique is his mother, and that he has a half-brother. Forge asks Rogue and Nightcrawler to investigate the murder. They discover Mystique at the funeral, posing as a minister. She tries to detonate a bomb but Rogue and Nightcrawler stop her. Mystique tells Nightcrawler to “come home” and he’ll finally learn the answers about his parents. Nightcrawler travels with Rogue to the home where Mystique raised her. Graydon Creed is there and he reveals to Nightcrawler that Mystique is their mother. He then tries to kill Nightcrawler, saying that he’ll be the first member of the family to be killed by the “prodigal son”. Not far away at a waterfall, Mystique affirms her love for Rogue when Creed appears. Mystique proudly tells him that years ago in Europe, she disguised herself as a villager and tossed a newborn Nightcrawler off a waterfall in order to save herself. She shoots at Creed, who teleports away, revealing himself to be Nightcrawler in disguise. The real Graydon Creed orders a helicopter to wipe out all of the mutants. Rogue captures Creed, but has to abandon him when she sees that Mystique and a barely conscious Nightcrawler are about to fall down the waterfall. Mystique claims that she’ll take the decision of who to save out of Rogue’s hands and falls to her seeming death. Rogue flies away with Nightcrawler as Creed escapes.

Continuity Notes
This is the issue that reveals that Mystique is Nightcrawler’s mother. A few hints were dropped during the Claremont run in the ‘80s, but it wasn’t confirmed until this issue. Mystique’s story about throwing Nightcrawler from the top of a waterfall seems to contradict the story of how Margali Szardos discovered him in Uncanny X-Men Annual #4.
Rogue tells Nightcrawler the story of meeting Mystique after her mutant powers surfaced as a child. Earlier appearances had Rogue saying that Mystique raised her before she even knew that she was a mutant.
Forge says that Mystique spent her time in his home secretly researching the Friends of Humanity, implying that her insanity was faked.

“Huh?” Moments
I’m no geography expert, but Mississippi isn’t really known for its waterfalls, is it? Especially a large waterfall that’s just “down the road” from a residential area. The idea that Rogue couldn’t carry both Nightcrawler and Mystique at the same time is also ridiculous.

Review
Yeah, this one’s terrible. If you do a Google Groups search on this issue, you can find even Scott Lobdell (posting as “Kid York”, I believe) mocking it in the late ‘90s. As the solution to a long-running mystery, it doesn’t work because it gets so much of the continuity wrong. Judged only as a stand-alone story, it’s still awful. The story mainly consists of Mystique, now acting murderously insane instead of regular old insane, behaving erratically while Rogue and Nightcrawler follow her. In the span of a few pages, she goes from tearfully telling Rogue how much she loves her to bragging about dropping Nightcrawler to his death as an infant. Of all of the characters who suffered in the post-Claremont era, Mystique has to be towards the top of the list. Who could care anything about this loon? The ending is especially ridiculous, with Rogue apparently forgetting that she has two arms and anguishing over whether to save Mystique or Nightcrawler. There’s an extremely long review of this issue, cutting it to pieces, that used to go around the internet. If you search posts in Google Groups by David R. Henry from 1994 you should find it. It’s worth reading.
Posted by G. Kendall at 8:12 PM

Here's a link to that other review: http://www.io.com/~patman/posts/unlimit4.txt

As I recall, Claremont and Alan Davis were going to finally tell the story of Nightcrawler and Mystique in Excalibur. Then they both fell away from the book, but Marvel promised they would go back and do that one story in an Excalibur GN. And for the next several years, that GN would be mentioned every so often as "forthcoming." I guess this is the point where Marvel threw up their hands and said to whoever was available "whatever, just take care of it."
(I didn't follow the X-books in this period -- that's why I love your blog! -- so I never found out when and how this had finally been resolved. I guess it wouldn't have been worth the wait...)

Thanks, Chris.
That's the review I was talking about. Thanks for posting it, Paul.

I don't think enough is made of how bad the artwork is in this. I remember liking Bennett's style (perhaps it was my teenage fascination with Rogue's butt), but that notwithstanding, the art gets progressively worse and worse on every page. It's a complete mess by the end of the issue. Even as a teenager, who didn't really think much about the plot, the artwork getting progressively sloppier struck me at the time.