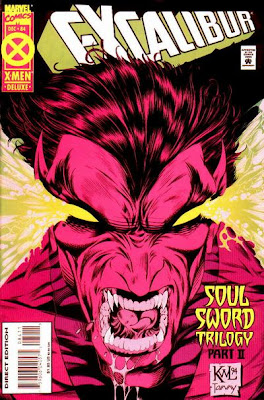 Summary
Nightcrawler, now secretly possessed by Gravemoss, tries to talk Kitty into giving him the Soul Sword. Britanic crashes through the wall and stops Kitty from killing Moira. They take the unconscious Kitty to the medlab, as the Soul Sword returns to her body. Gravemoss is waiting outside when Amanda Sefton appears. When he learns that she’s come to help Kitty, he nerve pinches her and drops her off of a cliff. Professor Xavier and Moira watch enhanced footage of Illyana’s death, and witness the magic within her transfer to Kitty at the time of her death. Meanwhile, Gravemoss sets an occult fire inside Douglock’s body, forcing the rest of the team to leave Kitty alone in the lab. She wakes up and is confronted by the sorceress Shrill. Shrill’s eye is made of the same material as the Soul Sword, which creates a supernatural friction that causes her great pain every time the sword is unsheathed. She tells Kitty that she’s going to kill her because she doesn’t know a way to destroy the blade. Gravemoss teleports in, still inside Nightcrawler’s body, telling Kitty that he’ll protect her if she gives him the blade. Inside Douglock’s room, the rest of the team is unconscious.

Continuity Notes
Britanic is no longer speaking with the Shakespearian accent, saying that he’s begun to adjust to his experiences.
Shrill says that the previous owner of the Soul Sword was the demon “Darkoth”. There’s an editor’s note saying that the story of Shrill’s meeting with him is “yet to be told”.
Moira says that the “tiniest contact” with Douglock will infect her with the Transmode Virus. This seems to be going back to the original continuity Claremont established with Warlock back in New Mutants, but the recent Phalanx storyline doesn’t fit into this. If just touching a techno-organic being infects you with the virus, why weren’t all of the characters who fought the Phalanx infected? I don’t think Marvel stuck with the “no one can touch Douglock” idea, but I could be wrong.

Review
The Soul Sword trilogy continues, moving at a pretty leisurely pace. Ellis doesn’t go in-depth with the continuity, essentially saying that Illyana used to have a sword that made her evil, and now it’s passed on to Kitty. What isn’t explained yet is why exactly the Soul Sword waited so long to manifest inside Kitty, and why she began to fall under its influence at this specific time. Introducing new characters who are also after the Soul Sword could needlessly complicate the story, but so far Ellis manages to keep things under control. A few Ellis-isms are starting to surface, as Gravemoss refers to Excalibur as “spandex clowns”, and says that he’d like to eat their eyes. There’s also almost an entire page dedicated to the characters discussing coffee. Daerick Gross’ fill-in art isn’t bad, and it’s a lot more consistent than his previous work in the recent annual back-up. It fits in well with Dodson’s work in the previous issue, so it’s not a jarring transition.
Posted by G. Kendall at 8:32 PM