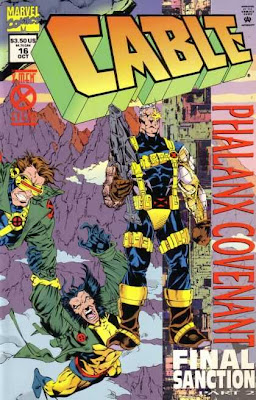 Summary
Cable, Wolverine, Cyclops, and Phoenix crash their plane into the Phalanx’s citadel. Before the crash, Phoenix used her powers to place the team a thousand feet below the citadel on the north face of the mountain. They attempt to climb the mountain without using their powers, assuming that the Phalanx are scanning for mutant activity. Meanwhile, Stephen Lang has turned against the Phalanx after realizing that the collective now wants to make everything on Earth techno-organic. He conceals his knowledge that the team survived the plane crash, and convinces Psylocke to let him assimilate her so that she can be used as a Trojan horse against the Phalanx. The team continues to climb the mountain and finally breaks into the citadel. Wolverine frees Bishop from his containment field, enabling him to absorb the Phalanx’s energy and release the rest of the X-Men. Psylocke combines her psi-power with Cable and Phoenix to lobotomize the Phalanx. Cameron Hodge draws energy from the remaining Phalanx outposts throughout the world, destroying them, in a vain attempt to keep the citadel from collapsing. As Hodge falls down the mountain, he drags Lang along with him. In space, a techno-organic being senses the loss of the Phalanx and prepares for a more “aggressive tactic”.

Continuity Notes
Since this is the last part of the storyline, I’ll point out here that the shadowy human figure speaking to Stephen Lang in Excalibur #79 still has not been revealed.

I Love the ‘90s
In the “Stan’s Soapbox” column, Stan Lee writes, “most Americans are still reeling in shock due to the incredible, headline-grabbing story of the terrible accusations leveled against a man whom everyone considered one of our nation’s greatest athletic heroes”. Rereading this, it took me a few seconds to realize that he was talking about OJ!

“Huh?” Moment
Wolverine refers to the Phalanx members emerging from the wall as “Oprah rejects.” What? He refers to them as “gelatinous” on the same page, so maybe it’s a fat joke?

Review
The Phalanx crossover finally ends, strangely enough in the spin-off that seemed like the smallest priority at the time. Maybe concluding it here was an attempt to build up Cable’s profile. I’d say that it doesn’t read like an issue of Cable, but since this series has been totally aimless for most of its existence, it’s hard to say what a normal issue of Cable reads like. Hama continues to emphasize Cable’s relationship with Cyclops and Phoenix, but he actually doesn’t focus as much on the idea as he did earlier in Wolverine. Even though this is Cable’s solo book, he doesn’t even play much of a role in stopping the Phalanx. It’s actually Wolverine who gets to free the X-Men, which leads to their defeat.

Judging this as a chapter of a larger story and not specifically an issue of Cable, it’s not that bad. Skroce’s art is still a little inconsistent, but I like most of what he’s doing here. His work is certainly stylized, but most of the figures are well-drawn. The digital coloring has gotten a lot less garish over the past few issues, thankfully. I can remember the first page of this issue, a tight close-up of a digitally enhanced Wolverine and Cable, really grabbing me as a kid, and it still holds up. Hama’s able to give all of the characters personalities, even portraying Cable as kind of a jerk, which is closer to his original characterization. There’s a nice scene where Wolverine lets go of his feud with Cable when he realizes how much Phoenix cares for him, which is a smart way to incorporate the various ways all of these characters feel about one another. The scene where the team scales the mountain could’ve easily become tedious, but Hama makes it interesting by incorporating realistic military planning into the team’s strategy. As the conclusion to such a large story, it does feel anti-climatic, but it does pay off some of the earlier hints dropped about Lang in the storyline. The absence of most of the other participants in the crossover is the main reason why this doesn’t feel like much an ending, I think. As a kid, I was just glad this crossover was finally over, which is the same way I feel now.
Posted by G. Kendall at 8:09 PM