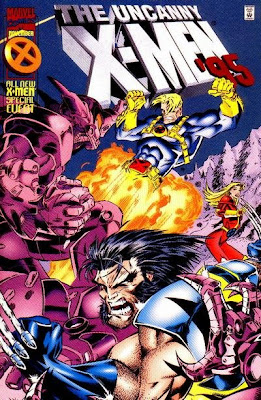 Cannonball flies to Massachusetts to pick up Husk, telling her that their sister, Joelle, needs help. Meanwhile, Joelle is inside a chapel with her boyfriend, a young man called Preacher. He’s painted an image of the Age of Apocalypse, but doesn’t know where his vision came from. Cannonball and Husk arrive with Storm, Wolverine, and Bishop at their Kentucky home. Cannonball’s mother explains that their sister has joined a “pro-human” group called Humanity’s Last Stand, and is now living at their compound. Cannonball tells Storm that he and Husk will rescue Joelle from the compound. While attending one of their rallies, Cannonball and Husk listen to a man named Garibaldi speak. He invites Preacher to address the crowd, who reveals his visions of a world ruled by mutants. A man watching from behind the scenes recognizes Cannonball and Husk and sends an army of robots to abduct them. Cannonball is attacked by the robots, but manages to escape. He overhears someone evoke the name of Trask before he flies away. Meanwhile, Husk follows Preacher as Garibaldi leads him towards Humanity’s Last Stand’s secret leader. She’s discovered and subdued by Garibaldi, but the fierceness of his assault unnerves Preacher. A wounded Cannonball returns to the Guthrie home and recruits the rest of the X-Men. Returning to the compound, Cannonball rescues Husk while Bishop locates Joelle. When Preacher sees Bishop, he can see in his eyes that he knows “the apocalypse”, too. The X-Men are soon attacked by the robots, which Wolverine recognizes as Nimrods. Preacher promises Joelle that he didn’t know about the group’s violent motives. Bishop absorbs the robots’ blasts and brings down a portion of the complex on top of them. Garibaldi emerges from the wreckage, threatening to call the authorities. Cannonball and the team leave with Joelle, content that the truth has been exposed. Later, Bishop wants to speak to Joelle about Preacher. Joelle doesn’t know where he’s gone, but she hopes he remembers her.

Wolverine calls the robots Nimrods, even though they don’t look anything like the established design. The secret leader of Humanity’s Last Stand is presumably a member of the Trask family, which would explain why Cannonball overheard his name and how the group ended up with Nimrods. Looking online, it seems that he was later revealed to be a new family member named Simon Trask.

It’s another annual filler story, written by Terry Kavanagh, who was starting to find more and more work within the X-office by this point. It’s not terrible, but it just comes across as a throw-away in the end. This is definitely one of those comics I read once and then forgot about as soon as I finished it. Kavanagh does have a few decent ideas, such as Joelle’s jealousy of her sibling’s mutant powers, and the impact knowledge of the AoA could have on the anti-mutant movement, but it doesn’t amount to much. Nothing makes Humanity’s Last Stand different from all of the other anti-mutant groups, and attaching Trask and an army of Nimrods to the concept just feels like a weak attempt to add relevance. Implying that the leader is a Trask, but keeping him in shadow and not confirming his identity is also annoying, since it’s yet another mystery that didn’t need to be turned into one. Preacher isn’t particularly interesting, but I like the fact that he’s not portrayed as yet another anti-mutant bigot. The fact that he has visions of a world ruled by a ruthless mutant but is still unwilling to give in to his anti-mutant fears has potential for future stories. That actually is a unique conflict for one of the human characters to have, even if it's not really dealt with in this issue.

The biggest disappointment for me with the story is the weak portrayal of the Nimrod robots. I believe this is the first time the X-Men ever faced more than one Nimrod at the same time, and instead of presenting a real challenge to the team, they’re defeated in a couple of pages by falling rocks. I guess this is stereotypical fanboy nitpicking, but even one Nimrod is more than enough to present a serious threat to the entire team. By the time I read this issue for the first time, I had already read almost all of Nimrod’s previous appearances and had always been impressed by how much of a lethal foe he was. Not only could he automatically counteract anyone’s mutant powers, but his body also instantly repaired itself, meaning that the X-Men always had to come up with a creative way to defeat him. The brilliant maneuver used here to defeat an army of Nimrods is to drop rocks on top of them. I guess you could come up with the No-Prize explanation that these are weaker prototypes that were built before the future Nimrod was designed, but even ignoring the established continuity, this is still an anti-climatic ending. I’m also not impressed with Hitch’s redesign of the Nimrod concept, which looks like generic villains from a first-generation Playstation game. The fact that they don’t resemble the established Nimrod design at all just makes Kavanagh’s decision to bring Nimrods into the story seem even more arbitrary. The rest of Hitch’s work is okay, even though I don’t like the way he draws most of the faces at this point, and some of the figures look rubbery. Like the writing, it isn’t that bad, but nothing about it is really that impressive.