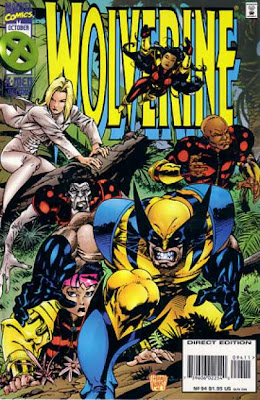 Lurker in the Machine

The Dark Riders take Cyber to Akkaba, the town Genesis slaughtered months earlier. Jamil, Candra’s young protégé, guides them through a sandstorm to their next destination. Meanwhile, Wolverine arrives at Generation X’s school in Massachusetts. While training the team in their Biosphere, he senses another presence. He tells Banshee and Emma Frost to lock the Biosphere down and run a full scan. That night, Skin and Jubilee observe Wolverine sneaking into the Biosphere. They watch as he stands down a spirit-creature. When Wolverine unleashes his berserker rage, the spirit flees. Before he leaves, Wolverine explains to Jubilee that the spirit called itself a Token. The next morning, Banshee theorizes that Wolverine chased the spirit away because a Token can’t abide its own kind.

I’ve never understood the point of this story. The previous issues of this storyline have been about Wolverine losing his grip on humanity and reverting into an animal. Now, this issue implies that he’s turning into some sort of mythological spirit-creature. The only explanation given is that “A Token is a wraith of the dead, or worse still, of the living.” Okay then, that makes perfect sense. As usual, Hama handles Wolverine’s characterization well, and I like the idea that Wolverine walked all the way to Massachusetts just because he felt like it. There are also a few decent dialogue exchanges in the training scene, but that’s really it. It’s an entirely inconsequential story. The guest art is by Chris Alexander, whose pencils look like something coming out of Jim Lee’s studio at this time. Most of the poses are awkward, and a lot of the faces are just unattractive. It’s not as appalling as Fabio Laguna’s fill-ins, but it’s still a weak effort.