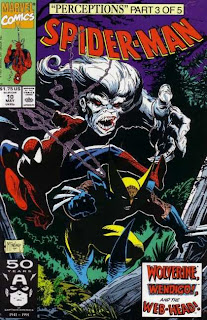 Summary: The police officers flee from the enraged Wendigo. Wolverine distracts Wendigo, allowing the remaining policeman to escape. Wendigo realizes that Wolverine doesn’t mean him harm and abandons the fight. In town, Wolverine recognizes Spider-Man’s scent. He arranges to meet Spider-Man in the woods, where he explains that Wendigo is innocent. The scent of a man was on both bodies, and Wendigo’s scent was only on the body of the boy he found. Spider-Man teams up with Wolverine to stop the real murderer.

We Get Letters: McFarlane reveals that several guest inkers pinched in to help him during an illness. He promises to reward the first fan who correctly identifies which page each inker did with a page of original art. The only style I can confidently identify is Rob Liefeld’s, since the inking on a few pages is virtually identical to the early X-Force style. I wonder if the guest inkers had anything to do with Spider-Man’s word balloons going back to their non-McFarlane style this issue.

Review: This, rather obviously, was put together during a deadline rush (the first page mainly consists of a Wolverine silhouette against a black background). The only plot advancements come from Wolverine convincing Spider-Man that Wendigo is innocent, and another hint that the police are aggravating the media hype. It’s also contains some of the worst dialogue in the series so far, leading me to believe that McFarlane didn’t have time to go back and polish this up. (Wolverine gets the most egregious lines: “Okay, then let’s go catch us a murderer!” “It’s the killings!” in response to Spider-Man asking why he’s in Canada. “I wanted to put on something that reminded me of a time when I didn’t know you!” “A few dead kids and all sense of reasoning disappears.” And, my favorite, “Curse my conscious.”)

After his run-in with Wendigo, Wolverine replaces his brown costume with his early yellow outfit. This might’ve influenced Jim Lee to permanently change Wolverine’s costume back, which seemed to be a popular move at the time. This is the outfit Wolverine wore during the classic Claremont/Cockrum and Claremont/Byrne issues of Uncanny X-Men, so it’s understandable that a lot of fans had nostalgic ties to it. Even though I liked the return of the yellow outfit, in retrospect I have to acknowledge that the brown costume is a superior design. Later artists screwed up the triangle-shape Byrne drew on Wolverine’s chest, but even when it became a brown stripe, it still worked. The brown costume, in a roundabout way, was revived in the X-Men Evolution cartoon and Ultimate X-Men series, but Marvel seems determined to stick with a variation of the yellow outfit. At any rate, if McFarlane was a fan of the early Wolverine appearances, surely he knew that Wendigo really was a nasty beast who did things like kill (and eat) innocent kids. Maybe later Wendigo stories established something else (I’m not sure what happened in-between Wendigo being cured in Uncanny X-Men around 1980 and this comic), but it’s a jarring transition. McFarlane’s using the character to make a heavy-handed point about humans being crueler than animals, but he’s conveniently forgetting that this sweet animal has been portrayed as a kiddie-eater in the past.

Yeah, considering in the comics Wendigo is a curse that transforms people who eat human flesh in the Canadian forest into monsters, I think it is safe to say his characterization as a sweet, dumb animal is a little off.

God, another horrible cover. The pose Wolverine is in, the way his claws are positioned...nasty.

Put me down as someone who preferred the brown costume as well.

Am I allowed to be weird and say that I like the brown and yellow costumes equally?

I think that the brown costume feels more like something Wolverine would wear (since he's hardly a traditional superhero), but I like the yellow one because it feels more traditional.