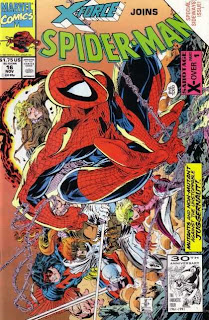 Summary: Spider-Man swings past the World Trade Center, just as Black Tom detonates the top floor of one of the towers. Spider-Man assists X-Force against Black Tom’s partner, Juggernaut, as Cable and Gideon argue over what to do next. After Shatterstar stabs Juggernaut in the eye, he lashes out and plows into one of the towers. The building lands on top of the heroes, yet they emerge ready to fight again.

Creative Differences: In future years, McFarlane will cite Marvel’s demand that he redraw Juggernaut getting stabbed in the eye as the final straw before he quit. In this issue, he says he’s leaving the book for the foreseeable future to spend time with his newborn daughter. There’s certainly no mention of McFarlane helping to form a new comics company.

I Love the ‘90s: This feels like the tenth comic I’ve reviewed that features the World Trade Center.

Where’s Felix? : There’s a tiny Felix head in the debris during the Juggernaut fight.

Review: This is the Spider-Man chapter of “Sabotage,” the crossover that ran through fellow modern classics X-Force #3 and X-Force #4. Like X-Force #4, this issue is drawn sideways, which is a gimmick that occasionally works during the Juggernaut fight, but often feels pointless. While McFarlane works in a few dynamic shots of Spider-Man, his interpretation of X-Force leaves a lot to be desired. It’s not much of a shock that McFarlane has rarely drawn team books, since he struggles with an awkward, lumpy interpretation of the mutant team on almost every page they appear.

Most of the dialogue consists of typical tough guy fight prattle, but it occasionally reaches the level of inexcusably bad. After Juggernaut refers to him as “Tonto,” Warpath replies, “Why does it not surprise me that your evil also includes racism? Looking to make yourself better at the expense of others.” There is one decent dialogue exchange between the original, tool-ish Cable and Gideon. Gideon questions why anyone is following Cable, pointing out that Cable doesn’t seem to particularly care about the civilian causalities and just wants to continue the fight. I think we were supposed to question the New Mutants’ decision to follow Cable originally, but it’s an idea that got lost as X-Force was swallowed into a sea of stereotypical‘90s awfulness.

So, this is how Todd McFarlane exits Spider-Man, and Marvel Comics. Even when Marvel and Image began doing crossovers in the ‘90s, McFarlane didn’t participate. McFarlane’s Spawn has teamed up with Batman on a few occasions (another crossover was announced a few years ago, although that announcement is a distant memory now), but he seems adamant about staying away from Spider-Man. One of Joe Quesada’s earliest publicity stunts after taking over Marvel was to publicly offer a Spider-Man/Spawn team up to McFarlane, on the condition that he draw it himself (I believe Quesada said he’d do the Marvel chapter with Kevin Smith, making this the holy grail of unbelievably late comics). Apparently, this only served to annoy McFarlane. Reading this series, it seems obvious that whatever affection McFarlane has for Spider-Man is overshadowed by his desire to draw hideous monsters, graphic violence, and other material that doesn’t particularly suit the character. I’m sure McFarlane is grateful for the recognition Spider-Man brought him, but I doubt he’s spent more than a second thinking about the character since leaving this book.

"In future years, McFarlane will cite Marvel’s demand that he redraw Juggernaut getting stabbed in the eye as the final straw before he quit."

So is that the actual page that was printed, or is that the original? Either way, I can't see why he would've thought something so graphic was appropriate to begin with...

The actual comic shows the sword almost reaching his eye, followed by a panel of black blood.

That link says that Marvel was making "arbitrary and nonsensical demands." I don't think asking him to not draw someone getting stabbed in the eye in a book that is on newstands and stars an all-ages character is a gross abuse of editorial power. This issue and the whole crossover suck.

Plus, you couldn't stab Juggernaut in the eye anyway, what his forcefield and all. Granted, a strong enough force could pierce it, but I doubt Shatterstar could. Anyway, this is Mcfarlane, so who cares about continuity? He felt like that drawing, so he did. And again, a horrible cover...when did Boom-boom become a midget?