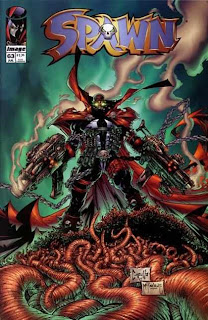 Summary: Spawn feeds on his worms before going out in public with his new face. He visits Terry, warning him that he’s preparing for his final confrontation with Wynn and that he’ll return for Wanda. Terry snaps back, leading Spawn to declare him an enemy. Later, Cogliostro warns Spawn that his vendetta against Wynn is a part of Hell’s plan, but he refuses to listen. Meanwhile, Jason Wynn augments his security while Sam and Twitch continue to investigate Spawn.

Spawntinuity: According to the narrative captions, Spawn returned to Earth “almost a year” ago.

Review: Okay, you might’ve thought something might actually happen in the book after Spawn’s original face returned, but we’re still dealing with the master of procrastination here. Spawn reflects on his new condition for a few pages, feeds on those stupid worms again for another page or two, steals a pair of sunglasses to cover his green eyes, visits Terry, talks to Cogliostro for a few pages, and then strikes a dramatic pose for a splash page. Meanwhile, Jason Wynn talks to security guards for several pages, while Sam and Twitch remind everyone that they’re still investigating the lead character. Oh, have we reached twenty-two pages yet? Darn. Well, see you next month.

Aside from moving impossibly slow, the plotlines don’t show a lot of promise anyway. Spawn confronted Jason Wynn just last issue, and decided that killing him wouldn’t be worth risking Wanda and Terry’s life. Now, he’s decided to make one more go of it, naively believing that with Wynn out the way, he can restart his life with Wanda now that his face has returned (whether or not the rest of his body still looks like a zombie isn’t addressed). Not only is he acting like a moron again, but he’s forcing the reader to revisit a plotline that had a fairly definitive ending last issue. And while I’m glad McFarlane remembered Sam and Twitch, he seems to have forgotten where their storyline left off. They were investigating Chief Banks’ connection to Washington officials, which lead to Wynn and Violator setting up a dummy informant to meet with them. Two separate issues, months apart, teased this meeting. A meeting we still haven’t seen, a full year later. Now, the duo are back to investigating Spawn, still angry that he left Billy Kincaid’s corpse in their office all the way back in issue #5. Are these two drinking bleach in-between issues?

I’d be curious to know if this was anyone’s first issue of the series. It’s the issue that was on sale the week the movie hit theatres, so it’s possible that someone unfamiliar with the comic would’ve picked this one up out of curiosity during the publicity buildup. (I’m assuming that it was still sold on newsstands at this time.) It’s also possible that some poor soul looked past the film’s many faults and actually wanted to learn more about Spawn after seeing the movie. What did they get for their $1.95? The hero inexplicably has a new face, he’s threatening to take his friend’s wife away from him, he bathes in worms, and he’s being investigated by two detectives (who are still mad about something that happened in a comic published almost five years earlier). McFarlane does get around to doing a full-issue recap of the series for new readers a few months later, but I can’t imagine why anyone would want to stick around if this was their first exposure to the character.

I travel to the Us on 98 and I bought Spawn on a newsstand, so I guess the answer is yes.

Are you going to review the movie adaptarion?

I haven't seen the movie in its entirety since it was released. I'm certainly not paying to see it again. I'm sure it will come up, along with more thoughts on the HBO show, in the future.

Well, as you pointed out, the best part of that movie was the soundtrack.

But I was actually talking about the comic adaptation of the movie adaptation. I haven´t read it in more than a decade but I remember enjoing it quite a bit.

I had no idea there was a movie adaptation comic! I've read all of the issues from the time of the movie and saw no reference to it.

I also enjoyed the adaptation, which I also have. I liked the cleaner, less exagerrated art in it (can't remember who drew it... had a Bart Sears quality if I recall), even if I was still enamored by the art in the regular series at the time.

(Also G, wanted to let you know that among other influences, your blog has inspired me to create my own blog, called X-Cards the Spot, which reviews each of the cards in the Jim Lee 1992 X-Men trading cards).