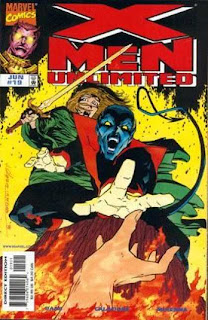 Summary: Belasco appears before Nightcrawler, offering him the captive Margali Szardos in exchange for permanent custody of the Winding Way. Before disappearing, he warns Nightcrawler that Amanda Sefton has embraced dark magic. Following Belasco’s clues, Nightcrawler locates Amanda at his childhood circus. They travel to Limbo together to rescue Margali, and are soon attacked by S’ym. S’ym reveals that “Amanda” is actually Margali, who switched bodies with her daughter months ago in order to escape imprisonment. Margali admits to the deception, but eventually finds the power to rescue Amanda and dethrone Belasco. She abruptly disappears, leaving Amanda to look after Limbo. Later, an armored hand emerges from a pit, grasping the Soul Sword.

Continuity Notes: According to Belasco, Nightmare gathered “necessary intelligence” for him during his recent encounter with Excalibur. Also, the Limbo version of Nightcrawler (the one that tried to feel up Kitty Pryde in his first appearance) is killed by Belasco when he attempts to rescue Amanda.

“Huh?” Moment: Nightcrawler and “Amanda” use sorcery to teleport to Limbo. Later, when he’s ready to leave, Excalibur’s Midnight Runner jet spontaneously appears in Limbo to give him a ride home.

Review: As this is not flagrant filler, it isn’t the typical X-Men Unlimited story from this era. Alternating series writer Ben Raab actually uses the issue to resolve one of his dangling storylines from Excalibur, perhaps because he’s discovered that book is getting cancelled. Considering that there wasn’t going to be an Excalibur book in a few months to finish this story, I don’t think anyone can blame him for using Unlimited to provide some closure to the fans. In light of the substantial number of dangling subplots in all of the X-titles, I wonder now if Unlimited could’ve been the place to wrap up the various loose ends. Is Kitty Pryde’s father alive or dead? Are Elsie-Dee and Albert still searching for Wolverine? Who was using the X-Men’s abandoned headquarters in Australia? What exactly was the conspiracy surrounding X-Factor? Well, X-Men Unlimited is right there, taking up rack space. Address those mysteries there. That might be unfair to readers of those individual titles, but if they’re pointed to the relevant Unlimited issue in the letters page, they’re at least aware that the story is getting resolved.

Much like Raab’s Excalibur, there’s a mix of good and bad ideas here. The impetus of the story is a little wonky, as it reads as if Nightcrawler has some authority over the Winding Way. I guess the idea is that Margali has agreed to abandon the Winding Way if Belasco hands her over to Nightcrawler, but that info isn’t conveyed clearly. Belasco also believes he’s keeping her prisoner at this point, so I’m not sure why he’s negotiating with her anyway. Previous X-continuity is used rather well, which is usually one of Raab’s strengths, as Kitty Pryde and Colossus argue against Nightcrawler going into Limbo alone. They have their own connections to Limbo and don’t appreciate Nightcrawler’s insistence that only he can accomplish this mission. The Margali and Amanda body swap fake-out also works as a genuine surprise, and Raab gets some decent character work out of Nightcrawler’s relationship with his foster-mother and lover/foster-sister.

The plot mechanics of the ending are confusing though, before we even get to the mysterious hand holding the Soul Sword. Why is Margali leaving? What “mess” exactly does Amanda have to clean up? As for the teaser on the final page, I remember people freaking out over the prospect of Magik returning, but considering that the pit the hand’s emerging from resembles the one Belasco was just thrown into, there’s really no way to know what Raab had in mind. Also, taking into account the necessity of this story as a subplot resolver, was it really wise to end the issue with yet another mysterious cliffhanger? Hasn’t this kind of intentionally vague storytelling gotten the books into enough trouble?