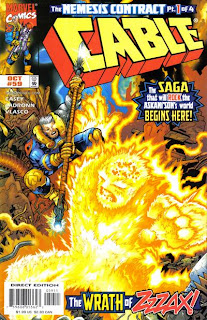 Summary: In the Sudan, SHIELD agent Jack Truman is assigned Cable’s case. He follows Cable’s trail to the Swiss Alps, where he meets an old rival, G. W. Bridge. Bridge offers Truman no help, but Truman is content knowing that Bridge is about to receive an unwelcome transfer to the Washington bureau. Later, Truman lands in Hell’s Kitchen. He unleashes the monster Zzzax to draw out Cable. After a weakened Cable defeats Zzzax, Truman confronts him.

Continuity Notes: Cable meets Kenny Kramer, the younger brother of local waitress, Stacey. Stacey reveals Kenny has Down syndrome, and that she’s taken care of him since their parents died.

Review: This begins “The Nemesis Contract,” a four-part storyline that pits Cable against SHIELD. Joe Casey’s pet character, and future Deathlok, Jack Truman makes his debut and receives most of the issue’s attention. I don’t like to throw around terms like “Mary Sue” -- actually, I hate that phrase -- but it’s hard to ignore just how hard Casey is selling this character. He kills an elephant with a handgun on his debut page, he just knows that G. W. Bridge is an idiot (perhaps a dig at Rob Liefeld, or just the early ‘90s in general), he casually mentions killing a rogue LMD of Dum Dum Dugan in the past, no one at SHIELD is cool enough to retrieve his files, and he nonchalantly gets hold of an Incredible Hulk monster just to attract Cable’s attention. Truman’s heavy narration on each page also gets a little tiresome, and it’s not helped at all by a lettering font that Comicraft seems determined to make even uglier with each issue. Yes, he’s a manly man with a healthy ego. Is there any other point to this story? Cable has a few pages to recap his T-O virus angst, and we learn more about Stacey, but that’s really it. I will give Casey credit for pulling Zzzax out of nowhere as a generic monster for Cable to fight, though. Their fight scene is enjoyable, and it’s the first time in a while that Ladronn’s actually around to draw the Kirby-style villain Casey’s thrown in for him.
Posted by G. Kendall at 11:18 AM