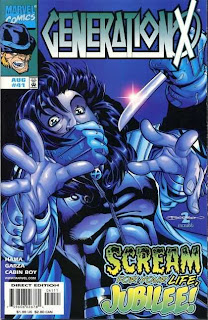 Summary: With the headmasters out of town, Skin convinces the rest of the team to spend the night watching horror movies. The movies give Jubilee nightmares, forcing her to watch versions of Bastion, Sabretooth, Omega Red, and Emplate kill her teammates. Jubilee awakens from her nightmare and discovers her teammates were planning on scaring her anyway. They give up when they realize how badly she’s already scared herself.

I Love the ‘90s: During Jubilee’s dream, Husk sings the Spice Girls’ “Wannabe” in the shower.

Review: After the lengthy, messy M-Plate arc, this is a welcome change of pace. Scott Lobdell established a precedent of character interactions trumping plot during his run on the book, so it’s a relief to read a simple story about the kids watching slasher movies while the grownups are away. Jubilee’s nightmare sequence adds some action, and a few comical movie references, to the story. Villains from Jubilee’s past are recast as movie killers, so Sabretooth becomes Freddy Krueger, Bastion is Norman Bates, Omega Red becomes Jason, and Emplate is Leatherface. I’m not sure if all of the recastings are supposed to relate to the specific villain, but it would be impossible to do this story and not have Sabretooth become Freddy. (It’s feasible that recasting Bastion as Norman Bates is a reference to Bastion’s close ties to his mother figure, but the other selections seem arbitrary.) The art comes from Alè Garza, who has a nice cartoony style that draws on artists like Chris Bachalo and Mike Wieringo. There’s even some Bill Watterson evident on a few pages. Garza, along with fellow Wildstorm artists Dan Norton and J. J. Kirby, should’ve gotten more work from the X-office in the late ‘90s.
Posted by G. Kendall at 11:15 AM

Emplate and Leatherface are both cannibals - one feeds on mutant bone marrow and the other on hapless tourists. I still don't get the Omega Red/Jason connection.