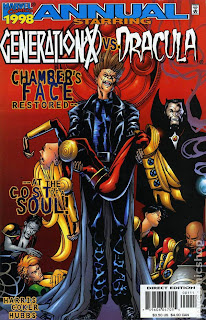 Children of the Night

Summary: Chamber is haunted by strange dreams, as Dracula takes refuge in an abandoned church not far from Gen X’s school. While watching a movie with Synch and Banshee, Chamber is attacked by one of Dracula’s thralls in the theater's bathroom. Meanwhile, Dracula slips into the mansion and kidnaps Husk. The team unites and tracks Dracula to the church. Husk is rescued, but Chamber is stunned when Dracula restores his missing body parts. Following Husk’s lead, Chamber rejects Dracula’s influence and opens the curtains. Dracula evaporates in the sun, and the church collapses. Husk assures Chamber that this wasn’t “real,” unaware of the bite marks on his arm.

Continuity Notes: While synching Banshee’s sonic powers, Synch asks Banshee how he talks while “doing this.” I believe the official explanation is that Banshee cannot talk while using his sonic scream (see the opening of Uncanny X-Men #255), but due to the odd mechanics of word balloons, it often appears that he is speaking. Another example of strange word balloon mechanics would be characters reciting entire speeches while leaping in mid-air, which I didn’t really notice as a kid until Wizard made fun of Jim Lee for doing it in WildC.A.T.S. (EDIT: A commenter has informed me this scene was actually in Cyberforce.)

Overlooking the similar plots, the story still has major issues. While the pairing of Generation X and Dracula is a creative use of Marvel continuity, the characters aren’t given any real reason to be in the same story together. Dracula apparently just likes mutant blood, and has selected Chamber as his ideal target. Why exactly he’s wasting so much time entering Chamber’s dreams, teasing him with ideas of how “the powerful” should behave, is unclear. Maybe Dracula honestly views Chamber as more than just a hamburger, but the story never explains why he’s so interested in Chamber, or what his future plans for him would be. There’s more than enough text in this comic, unfortunately most of it’s wasted on tedious gothic narration rather than clarifying the villain’s motivation.

The ending is also a mess, as apparently the cast refuses to believe that their fight with Dracula was real, even though they’re standing in the ruins of the church that was destroyed during their fight. (Why would Dracula evaporating in the sun destroy the church, anyway?) Or is it only Chamber’s metamorphosis that was never “real”? Who can tell. And while I realize the non-ending that hints that Chamber might now be a vampire is a nod to the horror movies that inspired the story, it’s not a great way to end what’s essentially annual filler. I’ve gone through the comic three times and can’t find when exactly he was supposed to be bitten, anyway. So, as a story, this is just as disappointing as the previous annual it unintentionally imitated, but thankfully the art isn’t another bland Jim Lee rehash. Tomm Coker and Troy Hubbs fit the mood perfectly, and rival even Chris Bachalo when it comes to drawing Chamber.

I remember that Wizard letters column! Although, as I recall it, it was Ripclaw leaping from a tree at Velocity in an issue of Cyberforce. Google "Ripclaw Velocity Tree" and you even get this:

Also, even if the inker is credited as Roy Hubbs in the comic, I'm pretty sure it's Troy Hubbs.

The font in the title page is hard to read, but after squinting at it, I see that it does say "Troy."

I think that panel is the one I remember Wizard making fun of. For some reason, I thought it was Warblade from WildC.A.T.S. Can't imagine why.

Yes, Banshee isn't supposed to be able to speak while using his power. I think this was more or less followed while Lobdell was writing the title. Of course, I'm sure mistakes were made over the years the various writers. For some reason, though, his daughter Siryn IS able to speak when she uses her powers, so, go figure.

Wow. Who knew Ripclaw was so eloquent?

This issue wasn't great, but I thought it was pretty clear when Chamber was bitten. (I went back to check the issue.) Dracula is going for his wrist and luring him closer. It cuts to another scene and when it cuts back Dracula says "Your will and strength and anger and life course through your veins. In your blood I taste them...." So while we don't see the actual bite, it obviously happened here.