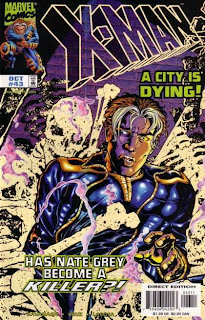 A killer stalks Dublin, as X-Man sleeps off his exhaustive act of heroism from the previous issue. Apparently, there’s no deep drama attached to his abrupt disappearance at the end of the last issue; Nate passed out and a mystery girl took him to a hotel (instead of a hospital) for some rest. Madelyne Pryor finally locates him, even though she doesn’t have telepathic powers at this point either, and declares he should be more “proactive.” She takes him into Dublin to investigate the murders. Since this is 1998 and apparently every freelancer is still obsessed with The X-Files, they have to do it as Scully and Mulder. Two problems with this -- Roger Cruz can’t draw likenesses at this point, and the characters just spent several pages discussing the loss of the telepathic powers that allow them to create these kinds of illusions.

Want more nonsense? X-Man senses the presence of “Age of Apocalypse radiation” at a murder scene, explodes with anger, and then flies into space with the Phoenix avatar wrapped around his body. If the idea is that Madelyne is supposed to be flying behind him, that’s not conveyed by the art at all (and she hasn’t been wielding the Phoenix Force, anyway). The story honestly reads as if X-Man has abruptly gained the Phoenix Force for absolutely no reason, and it magically disappears on the very next page. Also, reality warps created by time-traveling mutants leave behind radiation, it seems. That means X-Man hasn’t merely been annoying people since 1995, he’s been giving them cancer. Anyway, Madelyne tries to calm Nate down by giving him another open-mouth kiss, which leaves a giant smile on the kid’s face. Hooray, incest!

The insanity abates a bit, as X-Man and Maddie return to Earth and trace that unique AoA radiation. The other radiation spikes are in New York and Genosha, homes of the Dark Beast and Sugar Man respectively, leading Nate to believe Nemesis is the killer in Dublin. This is a decent use of misdirection, as we learn on the final page that a fiery duplicate of X-Man is the “true” killer. He’s chosen a girl’s dormitory to attack, which I’m sure isn’t going to tempt Cruz into any gratuitous cheesecake. Meanwhile, Ness is still stalking X-Man, and a shadowy figure speaks to a mechanical spider, which apparently ties in with the earthquake-creating “techno-gnome” from the previous issue. X-Man -- The Best Subplots in Town. 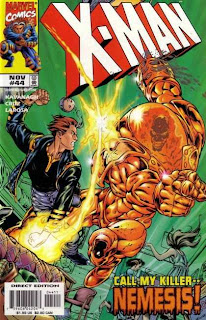 Kavanagh goes for the double fake-out, revealing that the X-Man doppelganger really is Nemesis. He’s used his armor’s shape-changing abilities to pose as X-Man, for some reason, and steal the life force of the locals. Madelyne suddenly declares that their interest in the murders is over, now that Nate’s cleared himself, and teleports them away. I know that we’re still not entirely sure what this version of Madelyne is even supposed to be, but it bothers me that Kavanagh has casually given her teleportation powers. Even if she is a mere psychic projection, as Jeph Loeb originally hypothesized, that doesn’t mean she could just take someone along with her while jaunting. And if she is a creation of X-Man’s telepathic powers, shouldn’t she have disappeared after “Psi-War?”

Not only does Madelyne have a nonsensical origin and power set, but her characterization is still all over the place. Last issue, Madelyne was the one pushing X-Man to be less passive and stop the murders, and now she’s adamant that they give up. He refuses, and they return for a big fight scene that’s just as vague and illogical as anything else in this series. Using their combined telekinetic powers, they destroy Nemesis’ armor, which causes his “bio-energies” to explode. Somehow, the human form of Nemesis survives the explosion and plots a trip to New York, hoping the Dark Beast will build him new armor. His energy form also survived apparently, and it continues to kill innocents in Dublin. Or, perhaps, this is a dream belonging to Madelyne, who seems to have absorbed some of Nemesis’ “bio-energy.” It’s impossible to tell if the story’s intentionally cryptic, or just poorly executed.

Meanwhile, the Gauntlet (or “Strikesquad: Gauntlet” as it’s now known) subplot continues. Cruz wasn’t able to draw too many nubile co-eds in the main story, but Kavanagh’s given him several pages of a Titanic-obsessed teen, undressing for a shower, as she contemplates her role in the Gauntlet organization. They’ve also lost their psi-powers, and are unable to locate X-Man for whatever nefarious purpose Kavanagh still hasn’t gotten around to explaining. On the final page, another young female Gauntlet member, Vice, is introduced. Via a computer monitor, a shadowy figure informs her that he’s tracked X-Man to Dublin. But, hold on, that’s not enough ambiguity and shadowy figures...

Ness is in a large city, presumably New York, complaining to a mystery man named Slaine that he’s lost X-Man. Slaine owes Ness some form of debt and agrees to talk to “our people” about helping him. He also warns his “cousin” Ness that he might not be able to return to “the Nest.” Still in shadow, Slaine flies away, on wings that resemble either large batwings or the metal wings Apocalypse gave Archangel. Again, it’s hard to tell how much of this is intentionally ambiguous, but it’s not hard to see what a mess this book is. I thought “Messiah Complex” was a conscious effort to get this title out of the dumps, but it looks like it’s determined to stay there.