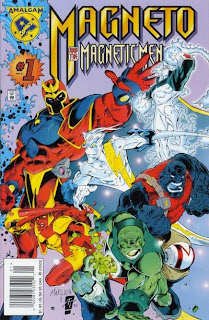 Summary: In response to his brother’s construction of the Sentinels, Magneto has created his own team of robots, the Magnetic Men, to aid mutantkind. They stop Will Magnus’ newest creation, Sinistron, from kidnapping the mutant Kokoro, but soon encounter him again on the slave-nation of Genosha. When Sinistron paralyzes Magneto’s consciousness, Antimony leads her fellow Magnetic Men to discover their own sentience and break free. United, the team defeats Sinistron, and Magneto realizes that his robots are more than machines, but are his new family.

Continuity Notes: The Magnetic Men are based on the personalities of the deceased members of the Brotherhood (the original group lead by Magneto in the Amalgam Universe, killed by his brother’s Sentinels). The Amalgam answer to the Metal Men, the team consists of Antimony (Scarlet Witch and Platinum), Bismuth (Toad and Tin), Cobalt (Mastermind and Gold), Iron (Unus the Untouchable and Iron), and Nickel (Quicksilver/Iceman and Mercury). The woman they save in the beginning, Kokoro, is an amalgam of Psylocke and Katana. Sinistron is a robotic version of Mr. Sinister.

Review: The Amalgam books produced by Marvel seemed to be more “’90s” than DC’s lot, mostly due to X-artists like Roger Cruz and Jeff Matsuda. In terms of story, this reads as a traditional superhero comic, but it’s definitely not penciled in a style associated with ‘90s DC. Even though DC had their fair share of Image-style artists, that’s not the look people tend to associate with that era of the company (DC probably has more Jim Lee clones today than it did in 1996). Since most of the artists chosen for their Amalgam titles were pretty conventional, I’m guessing DC editorial specifically avoided the Mike Deodatos of the day. If the goal of Amalgam was to evoke the old school, that didn’t stop Marvel from hiring artists that could just have easily shown up on a Youngblood spinoff. Then again, this is pretty restrained for a Jeff Matsuda job, so maybe he intentionally toned things down. Personally, I find this style more palatable than his X-Factor work.

Even though I know very little about the Metal Men, I’ve always considered this a great concept. Making Will Magnus Magneto’s brother is a cute play on their names, and the Amalgam Universe is filled with these in-jokes, but giving Magneto a team of Metal Men modeled after Marvel’s earliest mutants? That’s the kind of creative thinking and continuity-melding you want in an Amalgam book. Now, if only the Metal Men had actually maintained a healthy newsstand presence following the Silver Age, perhaps I would’ve gotten more out of the actual story. I’m sure there are character bits and inside references I’m missing out on, so unfortunately much of the issue comes across as standard superhero fare. Perfectly acceptable, but not particularly exciting. The references I do get are entertaining, so I’m assuming fans of both the X-Men and Metal Men will get a lot more out of this than the average reader.