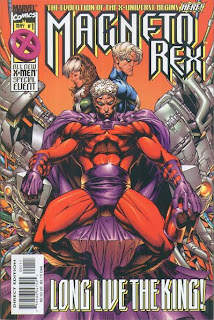 Summary: Humans flee Genosha as Magneto takes the throne. A Mutate leads him to his first council meeting, which introduces Magneto to Phillip Moreau, Jenny Ransome, Alda Huxley, and Pipeline, a former Magistrate. Phillip informs him that a rebel Mutate, “the Zealot,” is building a resistance against him. Later, Magneto and Pipeline recruit Fabian Cortez to join the council. Meanwhile, Amelia Voght takes Quicksilver to Genosha to see his father. Soon, he’s tricked by Zealot’s followers and kidnapped. Rogue, who’s arrived in Genosha to check on Magneto, witnesses Zealot’s gathering of rebel Mutates.

Continuity Notes: Much to Phillip Moreau’s surprise, Zealot is somehow his long-lost brother. Alda Huxley, the UN representative largely responsible for giving Genosha to Magneto, claims she’s a native Genoshan who only wants the best for her country. The sole explanation for Pipeline turning against the Magistrates is that he finally realized the horror they’ve unleashed. Fabian Cortez is recruited presumably because Magneto’s still recovering from the events of “Magneto War” and needs his amplification powers. (Although he should know by now that Cortez’s powers leave you weaker in the long run.) The Amelia Voght/Quicksilver scenes are another holdover from “Magneto War,” as she was sent to spy on him in an early chapter and not seen again during the crossover.

Production Note: The cover lists this as a May 1999 issue, but the indicia has the date as April 1999.

Review: As much as people seemed to dislike the “Magneto War” crossover, it did at the very least spur some discussion. Magneto Rex, on the other hand, was largely ignored by online fandom, aside from a handful of reviews that dismissed it as dull. You would think that a limited series spinning out of the latest X-over, one that actually did impact the status quo in a meaningful way, would’ve garnered more attention, but the minis had already acquired the nasty label of “Filler” by this point. Once again, I’ll point to the early ‘90s X-miniseries that everyone seemed to buy -- even ones starring obscure characters like Deadpool. If anything, the addition of Brandon Peterson, an artist Marvel once tapped for X-Men before losing him to Rob Liefeld, should’ve given this mini some kind of a boost. Yet, I barely recall anyone even noticing his return.

Joe Pruett was a small-press indie creator the X-office began hiring during this era, giving him this assignment and the scripting duties on Rob Liefeld’s brief return to Cable. Sometimes I wonder how the comics world would be different if this was the indie guy Marvel fell in love with instead of Brian Michael Bendis. I actually have no insight into the style of storytelling Pruett subscribes to, given that this is a fairly generic regurgitation of editorially mandated ideas; I just find it amusing that Marvel was perhaps grooming a small press writer for superstardom a full year before Bendis showed up.

I wish I could’ve found a more descriptive word than “generic” to describe Pruett’s work here, but I can’t. A typical sample of his dialogue reads like this: “This man is so much like his father in terms of stature and strength, and yet so completely different in his deeds and thoughts. Pietro is a reflection of the man that his father once was and should have been -- if he hadn’t given in to the hate and anguish which eventually corrupted his soul.” (That’s Amelia Voght’s inner thoughts, by the way, not a third-person narrative caption.) I will say to his credit that he isn’t padding the first issue and only giving a tiny slice of the story. The backstory of Genosha and Magneto is set up for any potential new readers, a new status quo for the island is established, a large number of characters are brought into the story, and the villain of the piece makes his first move against Magneto. Things do happen, even if the characters are severely lacking in personality.
Posted by G. Kendall at 11:25 AM

I bought the first issue of this series, but I don't believe I read the rest of it. I seem to recall that your assessment of it as "dull" is right on the money.

That said, I loved the status quo of Magneto as ruler of Genosha. I wish that had gotten more play before Grant Morrison came in and bombed it off the map.

Also, I did notice the return of Brandon Peterson and I was very happy to see him back on an X-book... but his presence alone wasn't enough to keep me reading this mini.

I agree, Matt. I remember thinking this was an awesome change to the status quo, and being a little sad when it ended so abruptly. Seems like there were a lot of possibilities with this scenario that got cut short (as much as I love what Morrison did).

I do remember Preuett being de rigeur at Marvel for a little while. He still kicks around the indie scene, as I recall, with his own company (whose name escapes me despite my being to able to picture the logo perfectly. Desperado? Google tells me Desperado). I was never too impressed with his stuff--Kelly and Harris were my Joes of choice at Marvel in those days--but I found it more distinguished than a lot of the work by random guys who were trundled through Marvel at this time.

Has Fabian Cortez ever worked in a story where Claremont wasn't using the character to take thinly veiled jabs at Fabian Nicieza?

Can you explain? I've never caught on to that.

Minor correction. It was, actually, Marc Silvestri/Top Cow who swiped Peterson away from Marvel, not Liefeld. His first assignment for the publisher, if memory serves, was the CYBERFORCE spin-off series, STRYKE FORCE.

Someone was talking about it over at CBR: http://forums.comicbookresources.com/showthread.php?t=398823

Scott is correct in my contention that Fabian Cortez was created by Claremont to be a stand in punching bag Nicieza. Essentially assistant begins helping the powerful guy only to turn on him and make him weaker in the end (and supplant him). The shared first name takes some of the subtelty away.

I enjoyed the Cortez character in X-men (91) 1-3 and in X-men Forever (particularly the 1st and 4th trades). I seriouslly can't recall any other stories where I enjoyed the character.

i actually like this. its maybe a little on the bland side, but its a perfectly fine late 90es x-story. i think the fact that its a mini (when it easily could have been an arc in the main titles) gives this an unfortunate air of irrelevance.

Cerebro - I'm talking about the late '90s. Peterson was offered X-MEN after Pacheco left, but turned it down to do a Supreme spinoff with Alan Moore. When it never materialized, he went back to Marvel to do this mini.

dschonbe - I'm pretty sure work on X-MEN #1-3 began before the Muir Island Saga was finished (explaining why Jim Lee skipped all of those issues). Nicieza only did the final chapters as last minute fill-ins. He didn't take over X-MEN until a year after Claremont left, so it doesn't seem likely to me that Claremont viewed him as a true replacement.

I guess my timing is off then. It's hard to read those X-men Forever issues and not read into it Claremont talking to one of his rivals from the time.

Now Cortez (whoever took control from Claremont) has been abused by the evil Corporation (Marvel) and hasn't really gained anything for the betrayl.

Were Nicieza and Claremont really at odds with each other? I thought Nicieza was pretty far removed from the books Claremont was doing at the time. iirc, he was just doing scripting duties (literally just filling dialogue bubbles) on X-Force, before doing a fill-in issue on X-Factor. Three issues of X-Men later and Claremont was gone, and the guy who replaced him as writer on Uncanny was Jim Lee.

Actually, Jim Lee would constantly ignore stuff in Claremont's scripts and do whatever he felt like. I'm pretty sure Jim was the reason Claremont left, since Marvel constantly took his side whenever they'd go at it. As far as I can tell, Claremont had next to no interaction with Fabian so I can't imagine why he'd construct a character to serve as an effigy of him; he was basically just an on the rise fill-in who happened to be making his way through the x-ranks at a time when Claremont was looking to leave. The fact that Cortez and Nicieza have the same first name is probably just a coincidence.

@dschonbe
I just remembered something else - Nicieza's scripting style on X-men, which he didn't jump on till somewhere in the double digits, was highly reminiscent of Claremont's. If Claremont had turned him in to such an obvious straw man, I can't imagine why Nicieza would then go on to try so hard and emulate his style.