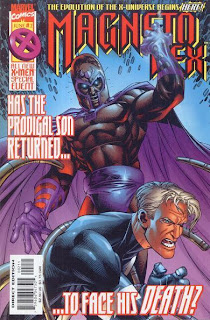 Summary: Magneto destroys the satellites and UN planes spying on Genosha. Meanwhile, Amelia Voght convinces Rogue to seek Magneto’s help before rescuing Quicksilver from Zealot. Magneto, however, disavows his son. Rogue and Amelia rescue Quicksilver without his aid, but Zealot soon finds them. As he proclaims himself the true ruler of Genosha, Magneto arrives.

Continuity Notes: Rogue kisses Magneto, hoping to learn the source of his hostile attitude. Magneto is totally unfazed by the kiss (which is either a continuity error or an intentional plot point), and Rogue is left with the sense that “there’s somethin’ else -- somethin’ sinister…sometin’ even you’ve blocked from our mind…” Bolding “sinister” might be a hint that Mr. Sinister has some connection to Magneto’s increasingly cold demeanor, but nothing came from this.

Production Note: No credits are given this issue. The next issue apologizes and runs these credits.

Review: The first issue of this series was dull, but I gave it credit for at least establishing the premise and setting the plot into motion. This issue is unforgivably boring. The plot is bare bones, numerous conversation scenes advance nothing, and the characters have the personality of dishwater. I can’t imagine what aspect of this story the creative team assumed the readers would find interesting by this point. All we know about Zealot is that he’s a sadist who’s somehow amassed a following, virtually all of the cast has interchangeable dialogue (which is unforgivable when you consider that Quicksilver, Rogue, and Amelia Voght have the bulk of the lines...and yes, Rogue has an exaggerated accent, but if you add back the dropped "g"s her speech pattern is no different than anyone else's), and Magneto spends most of his time sitting in meetings, when he isn’t busy irrationally provoking the UN.

I never agreed with the decision to revert Magneto to villainy, but there was at least some intensity to the character during most of his ‘90s appearances. Here, he’s heartless and violent, but the script does nothing to give him a credible personality. He isn’t crazy, he isn’t particularly angry, he isn’t conflicted, he isn’t remorseful…he’s just a generic villain with a horrific “regal” speech pattern. Magneto refusing to rescue his son ought to feel like a big deal, but instead the scene is just as flat and onerous to read as the rest of the comic. Magneto should be a fantastically interesting protagonist for a series. Even if you refuse to go the “shades of gray” route, Magneto has a rich backstory and numerous connections with various corners of the Marvel Universe. It’s shocking to me that someone thought material this tedious suited the character.
Posted by G. Kendall at 11:24 AM