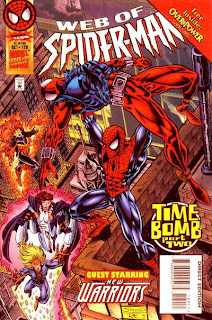 The Plot: A genetic implant created by the Jackal has forced Spider-Man into stalking MJ with the intent of killing her. Scarlet Spider and the New Warriors team up to stop him, but they’re no match for his strength and reflexes. Finally, MJ escapes to Aunt May’s former home. Surrounded by photos of Peter’s loved ones, Spider-Man finds the inner strength to overcome his programming and spares MJ.

Web of Continuity: This is the second chapter of “Time Bomb,” which began in Spectacular Spider-Man #228. The Jackal was able to implant the mental command to kill MJ into Peter because, of course, Peter is the clone. How exactly this storyline was explained when Peter was retroactively declared not the clone, I don’t know.

Creative Differences: Another gem from Life of Reilly -- Glenn Greenberg on the “cancelation” of the Spider-titles and the debut of the Scarlet Spider line: The idea was to have each Spider-Man book retitled so that the Scarlet Spider's name would replace Spider-Man's - AMAZING SCARLET SPIDER, SPECTACULAR SCARLET SPIDER, SCARLET SPIDER, and WEB OF SCARLET SPIDER. We'd get four new number #1's out of it, and it would be a way to capitalize on the Scarlet Spider's popularity one last time before he became Spider-Man. What that meant was holding off Ben's debut as Spider-Man even longer. As I recall, the sales and marketing guys wanted us to do the Scarlet Spider books for four months, four issues of each title, just like the X-Men books did it. Bob Budiansky rejected that idea, and pushed for just one month, one issue of each book. We (the editors and writers) weren't thrilled by any of this, but we agreed that one month was certainly better than four. As I recall, Budiansky's plan was agreed upon, but then the sales and marketing boys decided that just one month wasn't enough after all, and pushed for more. A compromise had to be reached.
Ultimately, the plan became this: TWO months of each Scarlet Spider title, with the exception of WEB OF SCARLET SPIDER, which would run for FOUR issues - even though Ben Reilly would no longer be the Scarlet Spider, and would not even be in the book, after #2. I'm asking the same thing you probably are - Huh?! After all this time, I couldn't remember for the life of me why we would ever agree to this scheme, so I called my good pal Mark Bernardo, who was my fellow Spider-Man Group assistant editor back then. Mark was working directly for Budiansky, and was more at the "heart of the storm" than I was. As far as Mark can remember, WEB was extended because the sales and marketing guys felt that two more issues of a Scarlet Spider book would bring in a significant amount of revenue for those two months. They believed that the Scarlet Spider "brand", so to speak, was strong enough to support this idea - even though there wouldn't even BE a Scarlet Spider by the time these last two issues came out! Ben was going to be Spider-Man by then, with a big, heavily-promoted launch being touted as "The Return of Spider-Man," and an all-new monthly Spider-Man title to replace WEB. Why the hell, then, would WEB OF SCARLET SPIDER still be in existence, competing against Ben's debut as Spider-Man? From an editorial standpoint, it made absolutely no sense. But the sales and marketing guys rattled off their sales projections and their statistics and whatever else they had in their arsenal, and in the end, they got what they wanted - two more months of the Scarlet Spider. Well, not THE Scarlet Spider...

I Love the ‘90s: There’s a “hidden image” 3-D poster bound into the middle of the comic, promoting a tie-in with FOX’s Spider-Man animated series and Fruit Roll-Ups. You might remember these 3-D posters from late night re-airings of Mallrats.

Review: Ladies and gentlemen, I present to you the final issue of Web of Spider-Man. And it sucks. “Time Bomb” was originally intended to be the absolute final “Ben or Peter?” storyline, culminating with Peter’s decision to retire and Ben accepting his birthright as the one, true Spider-Man. And, like every other storyline that was supposed to do this, it did nothing of the sort. This is blatant filler, with no purpose outside of perhaps promoting the New Warriors’ title, which had somehow been shoehorned into the Spider-office’s domain. To the creators’ credit, they do at least have Peter verbalizing that he honestly doesn’t want to kill MJ, which perhaps lessens the impact of two full issues dedicated to Spider-Man trying to murder his pregnant wife. Of course, Peter isn’t the real Spider-Man, so who cares what ridiculous, insulting b.s. we put him through anyway, right?

The final, final, final resolution (for now) to “Who will wear the webs?” is the next crossover, "The Greatest Responsibility." And, even then, the titles undergo a fake cancelation and renumbering as the Scarlet Spider line before Ben officially becomes Spider-Man. Web of Scarlet Spider runs two issues longer than the other titles, and once the event is over, Web is no more. Viewed internally as the weakest and most easily disposable of all the Spider-titles, Web is replaced with a brand new book, a title that will usher in the new age of Ben Reilly as Spider-Man and showcase the talents of Dan Jurgens -- Sensational Spider-Man. Spoiler alert…it doesn’t end well.
Posted by G. Kendall at 11:17 AM

Ben replacing Peter as Spider-Man was not how I wanted to see this storyline end, though I did enjoy the following year's worth of Ben-as-Spidey stories, I was eventually happy to see Peter return. But the idea of an ongoing Scarlet Spider title seemed like a no-brainer to me. If they'd just kept Peter as Spider-Man, while concurrently launching the Scarlet Spider in his own title and setting him up someplace else in the country, I wonder if the whole thing could have been better received.

Plus it would've help to appease both segments of the fandom -- you'd have a married Spidey living in New York, and a single Spidey in the form of the Scarlet Spider someplace else, with his own supporting cast and having his own adventures. I've often wondered if that concept was ever tossed around. It seems like something the marketing people might have gone for, too.

Anyway, here we are sixteen years later and even though we now have a single Spider-Man in New York, Marvel has finally decided we should also have an ongoing Scarlet Spider series. It's a decade and a half too late, but that's Marvel for you, I guess.

I love when you focus on Spiderman and your reactions to the Clone Saga have been a joy to read even if I'm less harsh about the whole thing.

Matt also makes a really good point and its very odd that this was not considered. In the Life of Reilly blog, Tom Defalco mentions how Marvel had been doing things of that sort for a while, Thunderstrike as a spin off of Thor, War Machine for Iron Man, U.S. Agent for Captain America etc. but Glenn Greenberg counters that none of those titles lasted all that long and that a Scarlet Spider comic would have shared the same fate.

I honestly believe with the right push and writer, DeMatteis for his affinity for the Ben character in particular the series could have been something special. In Kaine they would have had a Venom-ish arch enemy (I know Kaine was a poor thought out creation but again DeMatteis did great work on him). The single Spidey angle would have allowed a plethora of stories (although would we still have gotten that insipid Jessica love interest story I wonder?)

The thing that really galls me though is that in the graphic novel anthologies of the Clone saga it goes chronologically rather than what comics emerged first so in those collections Bens early adventures the Lost years are featured at the beginning! This makes no sense for any new readers, as those stories hinge on knowing continuity issues which were already revealed. Any reader who wants to experience the clone saga will have certain things such as Kaines identity spoiled for them. Very poorly thought out.