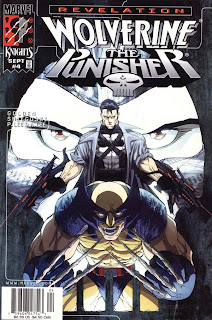 Summary: The Punisher finds Revelation and protects her from the robots. To stop her from reaching the surface, he reaches into his angelic arsenal and summons a weapon that can’t harm her -- a crystal that holds the essence of her slain parents. The warhead robot appears and, despite the efforts of Wolverine and Punisher, fatally injures Revelation. Punisher places the warhead inside the hole in his chest and absorbs the blast. The Council of Thrones arrives and takes Revelation to Heaven. Healed, the Punisher reflects with Lucy. Meanwhile, Wolverine ponders the afterlife.

Review: The last issue hinted that, perhaps, this mini could redeem itself a bit by giving the Punisher a meaningful moral dilemma -- killing Revelation for what could be his only chance of ever seeing his family again. This issue resolves that ethical quandary by giving the Punisher whatever magic powers he needs for a Get Out of the Plot Free card. Just a few pages after magically pulling out a “weapon” that works like a Hallmark card, he’s also able to fill up the hole in his chest with a bomb blast and walk away none the worse for it. It’s hard to imagine why this status quo didn’t last, isn’t it?

Meanwhile, Wolverine remains incredulous at the idea of an afterlife, even after a lengthy battle with angel-powers Punisher, and witnessing first hand a host of angels taking a young woman to Heaven. Oh, yeah, Wolverine also traveled to HELL with Punisher (and let’s not forget Ghost Rider) in one of the highest-selling prestige format comics of all time. He still can’t wrap his head around this stuff? If the writers wanted to explore Wolverine’s willingness to believe in Hell but his skepticism towards Heaven, that’s an interesting idea that could work as a legitimate character arc, but that’s not what we’re getting. Wolverine’s disbelief doesn’t offer any insights into his character, and none of the events of the story seems to impact him in any way. His skepticism about the afterlife has barely been mentioned in the previous chapters, so pulling it out now as an emotional hook for this issue just seems like an odd choice, anyway. The final page of the comic even has Wolverine wistfully staring at the night sky, fruitlessly looking for answers…probably the most banal conclusion you could execute in any “faith” story. All of the Photoshop tricks in the world can’t cover up writing (and art) this shoddy.
Posted by G. Kendall at 11:21 AM