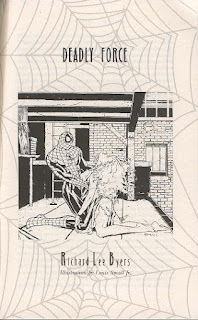 The Plot: Inspired by the death of Gwen Stacy, the Rooftop Ripper targets young blonde women and leaves their bodies on rooftops. During their first encounter, Spider-Man learns that the killer has super-strength. The Ripper knocks him unconscious and leaves him next to another victim. The next day, Spider-Man ponders using lethal force against the Ripper. He’s certain of the idea, until he mistakes a teenage purse-snatcher for the Ripper and accidentally breaks his arm. With a stronger resolve to protect human life, Spider-Man locates Ripper’s next hostage, saves her, and defeats Ripper by staying calm and focusing on the battle.

Review: One of the weaker installments in the book, largely because the Rooftop Ripper is such a lame villain. No motivation outside of general evilness, unexplained super-strength, dull visual (ski mask and jacket…not that an exciting visual would’ve properly translated in a prose story anyway), and dialogue on the level of a made-for-Lifetime villain all add up to a huge dud. And even though Richard Lee Byers does come up with a plausible rationalization for Peter to at least briefly contemplate lethal force, the concept still seems out of place in a Spider-Man story. Finally, attaching a serial killer to Gwen’s death is playing a little too loose with the “untold tales” premise for my tastes. Kurt Busiek came close to this line with the death of Sally/Bluebird in the Untold comic, but this seems like far too gruesome an event to have stayed buried in the past during all of these years. At least Byers doesn’t have Spider-Man save the final blonde on the Brooklyn Bridge, though.

The Ballad of Fancy Dan
Written by Ken Grobe & Steven A. Roman

The Plot: Spider-Man discovers that Fancy Dan’s son, teenage piano virtuoso Rudolph Loyola, has been kidnapped. While investigating, he discovers that Rudolph’s stepfather is suspected mobster Joseph Loyola, who’s feuding with rival Martin Severino. The Kingpin feeds information to both Spider-Man and Dan, which leads them into a confrontation with Severino and the Enforcers (who didn’t know Rudolph was their former partner’s son). After Severino is arrested and Rudolph is rescued, Dan realizes his son doesn’t recognize him. Loyola retires from crime and moves his family to Florida, while Dan contemplates an Enforcers reunion.

Web of Continuity: This story takes place right after Amazing Spider-Man#146. Although ASM #146 was published back in 1975, numerous references in this story place it more comfortably in the mid-‘80s. Not only does a bar owner call Damage Control after Fancy Dan wrecks the place, but there are several allusions to Daredevil having a similar interrogation technique; that’s really the Frank Miller Daredevil, which didn’t exist yet. Also, considering that Kingpin had been in retirement for a while before Miller revived him in the early ‘80s in Daredevil, his role in this story might be hard to fit into continuity.

Review: There’s a decent idea behind this story -- humanize joke character Fancy Dan and team him up with Spider-Man in a mob adventure -- and for the most part it works. I do think that a thirty-one page prose story focusing on Fancy Dan is going to pushing the audience’s patience under the best of circumstances, though. The best moments of the story happen towards the end, as Fancy Dan realizes that his estranged son doesn’t even recognize him, and Spider-Man calls out Kingpin for manipulating all of these events, but is forced to acknowledge that Kingpin’s selfish desires actually created the best possible outcome. Grobe and Roman also manage to work a flawless series of “illusion of change” into the story, as Fancy Dan is so disheartened by the loss of his son that he abandons any plans he had for reforming and just goes back to plotting Enforcer schemes. The reader has to feel for Fancy Dan, but by the end of the story, he’s still in the position he needs to be to serve as a throwaway villain.
Posted by G. Kendall at 11:14 AM

I would consider the apparent anachronisms as just part of the "sliding timeline" of the Marvel Universe; even a story like the Fancy Dan one, updated to the '80s, would still probably have taken place in the '90s or later in today's continuity regardless of whenever the actual story was published.

Yeah, but the anachronisms aren't like who was President or cell phones or whatever, they're which story came when. Even with a sliding time-scale, the Miller Daredevil stories happen after the "70s" Spider-Man stories.