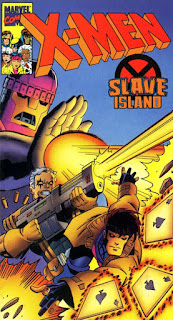 Summary: Gambit, Storm, Jubilee are kept prisoner with other mutants in Genosha. Using special collars to restrain their powers, the Genoshan authorities force the mutants to construct a dam, which will be used to power a Sentinel factory. Gambit convinces the authorities that he’s working undercover as a mole, but takes advantage of his small freedom to escape. He encounters Cable, a former Genoshan mercenary who turned on the Leader after discovering Genosha’s treatment of mutants. With Cable’s help, the mutants are freed and Storm is able to destroy the dam. The rest of the X-Men arrive and rescue their teammates.

Continuity Notes:
· This episode marks the return of the Sentinels, Henry Gyrich, Bolivar Trask, and Cameron Hodge (although Hodge’s former position as Beast’s lawyer isn’t mentioned). Master Mold is introduced as a giant Sentinel manufacturing plant.
· Numerous mutants make cameo appearances in this episode, including Mystique, Pyro, Blob, Northstar, Aurora, Caliban, Sunfire, and most of the cast of X-Force at this time.
· The Genoshan authorities don’t know for sure if Cable is a mutant. He certainly doesn’t use his powers in the episode (which, at this time, only consisted of mild telekinesis). It’s possible the episode was written before the producers even knew what Cable’s powers were supposed to be.
· Domino, who also had vaguely defined mutant powers during this period, is given powers very similar to Gambit’s by the show’s producers.
· This episode has two endings. Because episode eight wasn’t ready yet, the cliffhanger that lead into it had to be replaced when this episode originally aired. In the original airing, the X-Men return home in a happy ending. In the “official” ending, they return home to discover the mansion in ruins.

“Um, Actually…”: In the comics, Genoshan authorities restrict mutant powers with skintight bodysuits. (Rictor is accidently drawn wearing his in the episode.) The newly created Mutates also have their heads shaven. And Cable, of course, never worked for the Genoshan government. He didn’t have anything approaching an origin when the episode went into production, so it’s understandable that the producers felt the need to give him some sort of backstory.

Saban Quality: Cable’s design from the comics remains unchanged, which means he wears an “X” logo even though he’s not affiliated with any of the X-teams at this time.

Review: Even though this is a pretty sanitized version of the early Genosha stories, I still consider “Slave Island” one of the first season’s best episodes. If you were a kid whose first exposure to the X-Men was though this series, this episode must’ve been a revelation. The Morlock story hinted at the idea, but this episode drives the point home -- the world is just filled with mutants. All kinds of mutants, actually. Many of them even dress like the X-Men, oddly enough. Luckily, the animators have mostly stuck to character designs from the comics for the background characters, with only a few generic designs for new characters snuck in. (The guy in the green suit with the giant head is a new creation of the cartoon’s, right? I never understood what the animators were thinking with this one. He’s even in the opening credits for some unthinkable reason.)

If you’re already a fan of the comics, then the episode’s a thrill for anyone engrossed with the early ‘90s storylines. The readers already know that Gambit is the alleged traitor on the team, and what does this episode bring us? Gambit betraying the team! Of course, his true intentions are revealed almost as soon as the show’s back from the commercial break, but it’s still a great play on the audience’s expectations. For younger fans unfamiliar with the comics, I’m sure the brief tease of Gambit’s treachery had a heavy impact as well. (I certainly remember what it was like when Dusty “betrayed” the G. I. Joe team when I was a kid. This is heavy stuff for a five-year-old.) Even when the villains are defeated and Gambit’s cleared himself, the doubts still linger, as Gambit refuses to tell Jubilee whether or not he would’ve sold the team out for his own benefit. He’s clearly picking on her, but the question remains unanswered, which is a clever way to tease the cartoon’s own adaption of the X-traitor plot. 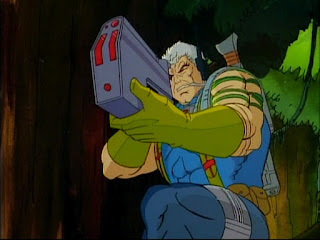 Comic fans also had to be excited to see Cable’s animation debut. I never fully bought into the Cable hype, but it’s impossible to deny the influence the character was having on mainstream comics at the time. While Marvel was milking every last penny it could out of the character’s mysterious past, every other company was cranking out as many one-armed, one-eyed clones as possible. Not only were X-Men fans getting a loyal translation of the comics on Saturday morning, the producers also made it clear that they knew what the core audience wanted. At the time, that was Cable. And, yes, it’s insane that Cable appeared before Nightcrawler, Banshee, Iceman, etc. In retrospect, at least. In early 1993, getting to Cable as soon as possible makes sense.

Using Cable as a disillusioned mercenary is a simple way to bring him into the plot, while also hinting at his militant pro-mutant stance. Unfortunately, the series isn’t too far away from following the comics’ example and recasting Cable as a future mutant messiah, but right now they’ve captured the early appeal of the character. Not only has Edens figured out how to incorporate Cable into the story, along with dozens of established mutants as background figures, but he’s also created a sanitary version of the Genoshan torture chambers that still works for kids’ TV. Locking claustrophobic Storm into a tiny box and baking her in the heat for hours is fairly brutal, and the actress’ portrayal of an increasingly unhinged Storm is one of the few highlights the character received during the show’s run. So, yes, there’s a lot to like here. The quality drop from this episode to "The Unstoppable Juggernaut" is actually shocking in retrospect.

Credit to http://marvel.toonzone.net/xmen/ for the screencap. The VHS cover, which was the first done by either Ty Templeton or Mike Parobeck, was scanned by the excellent uncannyxmen.net site.
Posted by G. Kendall at 11:18 AM

It's weird, because I thought I saw every episode first-run, but I have no recollection of the "happy ending" version of this one. The only version I recall is the one where they return home to the demolished mansion.

I guess I either didn't catch this one first-run, or more likely, saw it rerun so often with the corrected ending that the original was wiped from my brain. The only reason I have trouble with choice B, though, is that no mention of the happy ending has ever jogged my memory even one tiny bit. And I usually have a really good memory about things like that.

This might be my favorite episode of the first season. I think they make pretty great use of Cable, honestly he's probably a better character here than he was in the comics at the time. Although the gun that takes ten minutes to blow stuff up is pretty awful. Standards & Practices at work.

Huh. I have no recollection of the original ending either, and I'm pretty sure I watched all these first run as well. I'm fairly certain the DVD includes the "revised"/mansion trashed ending as well.

I never fully bought into the Cable hype

I did. Still have a place in my heart for the walking stereotype (though I liked him much more in the "mutant messiah" role than the "gun toting mystery man".

I actually love how Cable's non-distinct, quasi-futuristic guns from the comics translate so well to animation; neither medium had any interest in portraying the weapons realistically.

If anyone's interested, the original ending is posted here:
http://www.youtube.com/watch?v=IS8RHoTAh14