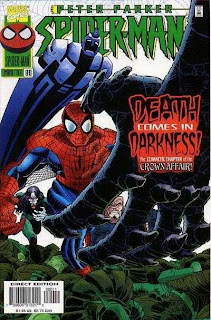 The Plot:  Peter is saved from Morbius by Hammerhead, who has invaded Fortunato’s compound with his men.  SHOC, Morbius, and Peter are all taken to Hammerhead’s home, where he explains that he’s trying to stop Fortunato and Hydra from overtaking the city.  Just as Peter sneaks away and transforms into Spider-Man, Crown attacks with Hydra forces.  Morbius’ bite weakens Crown, and by combining his webbing with SHOC’s powers, Spider-Man is able to protect the city from a release of Hydra’s dark energy.  Hydra’s ship is destroyed as the energy is reflected away from the city.

Miscellaneous Note:  The title of the story is a reference to Blood Simple, which the internet tells me was Joel Coen’s directorial debut in 1984.

Review:  Sure, why not throw Hammerhead into this, too?  This is the cramped, rushed conclusion to the SHOC/Crown/Morbius arc, and it does essentially nothing to save the story.  We’re given no real answers regarding the nature of SHOC and Crown’s power, nor do we ever learn why exactly Morbius is connected to it.  We also have no idea who Crown is actually supposed to be, nor or his predecessors were, which makes his vague death scene this issue even more annoying.  Also, in retrospect, the Dr. Janson angle is kind of messy.  Not only do you have to buy the fuzzy logic that vampirism is somehow tied into Dr. Aiken’s scientific discovery of a mysterious black energy source years earlier, but you also have to accept the coincidence that the doctor Morbius sought out to help his condition just so happened to be Crown’s lover.  And what was the point of using Morbius in this arc?  Apparently, his one-panel fight with Crown is supposed to be his big redemptive moment, a moment the previous issues haven’t built towards in any way.  There are also a few tacked on scenes of Spider-Man trying to befriend the young son of one of Hammerhead’s men, but that goes nowhere.  Nor does the drama of SHOC possibly joining Hammerhead’s forces actually add up to anything.  Everything just falls flat, except for the art, which I fear will be a recurring theme of this run.