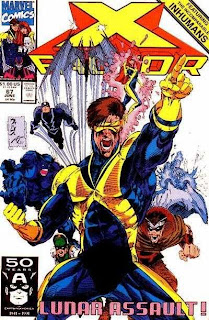 Summary:  The survivor modules containing X-Factor are discovered by the Inhumans’ royal family near the moon.  They’re teleported to a secret base, where X-Factor learns Apocalypse has overtaken the Inhumans’ lunar home and kidnapped Medusa.  Suddenly, the Riders of the Storm appear and abduct Crystal.  In response, X-Factor and the Inhumans raid Apocalypse’s base and free his captives.  X-Factor is soon lured into a trap, however, as a massive Apocalypse looms over the captive Nathan.  Elsewhere, in the future, Boak sends Askani to the present day.

Creative Differences:  Two added word balloons on page four establish that Medusa has been kidnapped by Apocalypse.  I wonder if they were added later to explain why she doesn’t appear in the issue?

Review:  More running and fighting, and just like the previous chapters, Claremont’s script adds some gravity to the story, but there’s only so much he can do.  At the very least, he can create a dynamic between the characters that helps to cover just how much of this story consists of fight scenes and set-ups for fight scenes.  This issue is filled with those trademarked Claremont Vague Hints That Could Be Important Later, and many of these clues are actually paid off in future issues.  We learn that Rachel Summers is the Mother Askani in 1994, which was around the time Cable was confirmed as Nathan Summers, the “Chosen One” that will allegedly kill Apocalypse one day.  (Marvel came close to paying that one off in 1999, but chickened out.)  Bringing the Inhumans into the story is a decent surprise, even if the pacing is so frantic the characters aren’t properly introduced at all.  Just seeing the Inhumans in an X-Factor story, fighting Apocalypse of all villains, has a basic novelty appeal to it.  And setting the climax on the Blue Area of the Moon, where Jean Grey “died” back in Uncanny X-Men #137 is a smart decision, one that Claremont gets some mileage out of as he scripts his way past yet another fight scene.

Summary:  Sebastian Shaw is furious to discover that he’s lost control of Shaw Industries.  His son Shinobi enters, bragging that he’s responsible.  Shinobi uses his mutant powers to reach into his father’s heart and induce a heart attack.  Explosives then destroy Shaw’s home.  Shinobi emerges from the rubble, smiling.

Continuity Notes:  This marks the debut of Shinobi Shaw, a main player in the upcoming Upstarts storyline.  Shinobi mentions that his powers, density manipulation, are closer to deceased Hellfire Club member Harry Leland’s, making him wonder who his real father is.

Review:  Regardless of the title, this is technically an epilogue.  Yes, this is a “prologue” in a sense to the Upstarts storyline, but it’s a separate story at the end of the issue.  I don’t know of any other back-up story that’s been labeled a “prologue” before.  Anyway, this is Sebastian Shaw’s big death scene, one that’s casually ignored years later by Jeph Loeb in X-Force.  Chris Claremont didn’t seem too enamored with this story either, considering that he ignored all of the early Upstart material that he even co-wrote when doing X-Men Forever.  In retrospect, the story is a pretty flagrant example of killing off an established character in order to sell a new one.  I was actually intrigued by this short story as a kid, though.  The trick hadn’t been beaten into the ground by this point, and I had no idea Shinobi would turn out to be such a dud, so hopefully I can be forgiven.

This issue was the weak link of the four-partner for me. Definitely some novelty in the Inhumans guest-starring, yes, not to mention the symbolism of the moving the climax to the blue area of the moon. Unfortunately, Portacio's art lets the story down. I don't know why he wanted to over-complicate a straight-forward beat 'em up by having both sides employ holograms and various other means of trickery, but the result is just a jumbled mess of images with no rhythm or forward momentum. Portacio didn't succumb to "pinupitis" as badly as some of his contemporaries, but this issue is full of that sort of thing.

I wonder if Claremont was feeling better or worse about Portacio joining him (as he thought) on Uncanny at this point in the run?

Don't worry - I was right there with you in thinking Shinobi Shaw was going to be a BIG DEAL, along with the rest of the Upstarts. Ah, the folly of youth.

Agreed as well that the setting of this story lends it some gravitas. Claremont is often accused (sometimes with merit) of returning to the Dark Phoenix well too often, but in cases like this, it totally works.

'Regardless of the title, this is technically an epilogue. Yes, this is a “prologue” in a sense to the Upstarts storyline, but it’s a separate story at the end of the issue. I don’t know of any other back-up story that’s been labeled a “prologue” before.'

That seems a little rigid. Calling it a "prologue" even though that's counter-intuitive given its placement is exactly the point, so that readers get excited about what it is a prologue TO. And as you said, it's a set-up for the Upstarts storyline, not an epilogue to the events of this story.

It's not really unprecedented either, in an X-Men comic. See the final two pages of Uncanny #122 ...

"Askani’s trip to the present is presumably a flashback explaining how she got here two issues ago. It this is supposed to be a different Askani’s journey to the present, that isn’t clear at all. "

I never was confused by this. To 12-year-old me, this was obviously a flashback explaining where the Askani of the previous two issues had come from. She says in her narration that she screwed things up by letting Nathan get kidnapped, so it seems clear that it's the same person.