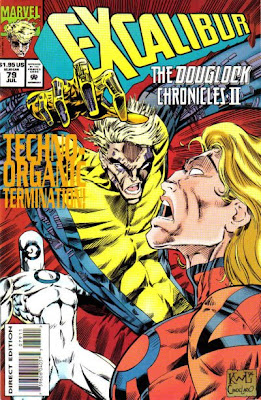 Summary
Zero teleports Excalibur and the family they rescued to one of Stryfe’s hidden bases under the Pentagon. There are over three thousand inert droids inside the base, but Zero says that this is the last place the active droids will look for him. Kitty Pryde is angry with Douglock for assuming Doug Ramseys’ appearance, but he doesn’t understand why. When Zero learns that Meggan senses feelings and emotions inside of him, he realizes that he is now a sentient being. His sentience allows him to overcome Stryfe’s programming, which causes the inert droids to begin self-destructing. Zero says that the droids will stop at nothing to kill him in order to destroy the knowledge he’s unlocked -- the secret of the Legacy Virus. Meanwhile, an enraged Stephen Lang senses that Doug Ramsey is missing from the Phalanx. A mystery man tells him to calm down and to focus on their grand plan. On Muir Island, Moira McTaggert and Professor Xavier study the development of the Legacy Virus. A distraught Moira shows Xavier a DNA model that confirms that the Legacy Virus can spread to humans.

Continuity Notes
In one brief scene, Val Cooper gives Forge a file on Kitty Pryde’s father, but Forge thinks that the information is too unreliable to act on. I know that Kitty Pryde’s father is considered dead today, but I don’t remember where this specific subplot went. I vaguely remember it staying in the background of Warren Ellis’ run.

How exactly humans can contract the Legacy Virus isn’t explained, although it’s worth mentioning that the Adventures of Cyclops and Phoenix miniseries established that it was originally developed to kill humans. The Legacy Virus is supposed to kill mutants by turning their powers against them (although it only seemed to give Illyana the flu), so I’m not sure what it would do to a human. A future issue will reveal that Moira has the virus (in another storyline that never goes anywhere).

Review
The Zero storyline drags on. Apparently, the idea was to set up Zero as a means to cure the Legacy Virus, but that concept was dropped quickly. Aside from being a tiresome story in its own right, it’s even more disappointing to know that all of the ideas being established are just going to be ignored soon anyway. The only aspect of the story that relates to any of the actual cast members of the title is Kitty’s reaction to Douglock. Their scene together doesn’t work at all, not only because the emotions ring false, but because the story also doesn’t bother to explain their past together. Not only does this storyline assume that you care about minor characters from another spinoff, but it expects you to automatically care about the relationship between two characters from the early ‘80s. Excalibur seems to be taking Cable’s place as weakest spinoff at this point.
Posted by G. Kendall at 9:08 PM

Ah, Warren Ellis can't get to this book fast enough! I remember this book (and his 2099 stuff, believe it or not) are what made me a fan of Ellis early on and gave me the foresight to pick up on Transmetropolitan and The Authority early. This filler material is just deadly in retrospect (Ben Raab, if I remember right, ran this title into the ground post-Ellis). Not the book's finest hour.