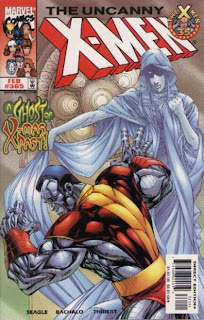 Ghost of X-Mas Past!

Summary: A voice calls out to Colossus on Christmas Eve night. As he wanders the mansion investigating, his sketches disappear from his drawing table, and return with a fairy tale written on them. Finally, Colossus follows the voice to the attic, where a teleportation ring takes him to a ghost world. There, he meets the ghost of his sister, Illyana. She asks him to “remember” and then disappears. Colossus realizes that he’s left her photos unpacked with the rest of his belongings. He pulls out her picture, and the voice finally says goodbye. The next morning, Marrow reveals that she wrote the fairy tale because she wanted to collaborate with him.

Continuity Note: Obviously, this story was written when Illyana was still dead. She tells Colossus that “the powers in charge” won’t let her outright tell him what she wants him to do. If she speaks about it directly, she’ll lose her “chance to move on”. I don’t know if these were meant to be hints for a future storyline, or just generic references to the afterlife (it’s hard to tell in comics, after all).

Review: It’s a one-shot Christmas story, so it’s not surprising that this is a sentimental, quiet issue. Most of the story consists of conversation scenes between the team members, reminding me of the “quiet” issues of Lobdell’s run. While Lobdell seemed to be content with just the conversation scenes, Seagle tries to work a short story around the conversations. It’s not particularly deep, but it’s a nice acknowledgment of Colossus’ past, and helps to make him feel like a real member of the team and not an editorial add-on. Revealing that Marrow, and not the ghost, was the one stealing his sketches is another nice touch. This is the final issue for both Seagle and Bachalo, although the only acknowledgement of this comes from a cartoon of the creators on the bottom of the final page. Bachalo’s work here isn’t as strong as his previous Generation X run, but it is a marked improvement over his more recent issues of this series. Seagle’s exit caused quite a stir online at the time, as most fans were convinced that he was chased away by overbearing editors. It’s hard to judge his run as a whole since it mostly consists of setups for storylines that were never resolved, and the stories that were resolved were rushed and unsatisfying. I’m sure he had the potential to do greater work, but I have to admit that the stories become more coherent after his exit. 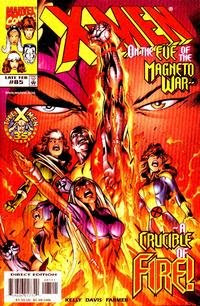 A Tale of Two Mutants

Summary: Magneto disguises himself as a civilian and talks to “average citizen” William Jones in order to learn his thoughts on mutants. Magneto is surprised to discover that William is unwilling to condemn all mutants by the actions of a few. When William turns the conversation towards Hitler, an enraged Magneto lashes out and reveals himself. Terrified, William responds to Magneto’s prodding and tells him that he wants him dead. Magneto, satisfied by the response, returns to the North Pole and enacts his new plan. Meanwhile, the X-Men rescue babies from a burning hospital, but are targeted by the local police. Xavier fears that he must control the officer’s minds, but Storm manages to calm them down, reviving Xavier’s faith in his dream.

Review: This is a transition issue, as Joe Kelly exists while Alan Davis debuts. Kelly goes out on what is likely his strongest issue, with a simple, yet clever, Magneto piece that’s vastly superior to most of the post-Claremont Magneto stories. The final result has Magneto firmly as a villain again, but at least the story attempts to justify his point of view, rather than presenting him as the one-note psychopath he’s become by this point. The portrayal of the average citizen not as a bigot, but as someone with real fears, is also a nice twist.

The Magneto story is intercut with a fairly mundane “X-Men rescue civilians” story, which predictably has Xavier regaining faith in his dream after briefly doubting it. Kelly adds a little edge, as Xavier is reassured of his belief in humanity while Magneto’s negative point of view is confirmed (at least in his mind). This is really an entire issue used to tease the next crossover, but the execution is very well done. Alan Davis’ art is great as usual, and it will remain one of the selling points of the book for the next year.

I love these two issues (X-Men #85 especially). The characterization of the team seems to have finally gotten on track, with most of the characters acting like they had just stepped out of a Claremont issue from the 80s. I like the scene with Puck visiting Logan and smoking cigars and the portayal of Gambit and Professor X in Uncanny #365. And X-Men #85 is by far the best portayal of Magneto since X-Men #3. Also, it is nice that both writers end their stints on somewhat hopeful notes. I think the artwork is stong in both issues, as well. Looking forward to the upcoming Alan Davis run, as I think it is actually a little better than people remember.

I remember reading interviews where Seagle and Kelly talked about all the storylines they had planned, including plans a Magneto storyline where he abducts the X-Men and imprisons them in an elaborate simulation of the death camp he was imprisoned in as a kid. Admittedly a story like that could go horribly off the rails, but still reading your reviews kind of vindicates the impression I've always had, that the Kelly/Seagle era is a story of lost potential.

The Kelly issues, maybe. The Seagle run as a whole doesn't hold up as well as the Kelly run, and looks like more of a mess.

One plot that they planned was that they wanted to kill Storm during the Magneto War storyline.

Well, it was kinda fun. Like a light read. Magneto was still protrayed as a psychopath, in my opinion - only a self convinced one. He's "test" was nothing but a cheap exercise in demagogy. He didn't prove nothing. Even more so - the last comment of the "regular guy" prove him utterly wrong, and he still continued on his plan to do what he wants. That makes him a hypocrite.
I think the art helped to sell this issue a lot, and the idea was intriguing but flat.