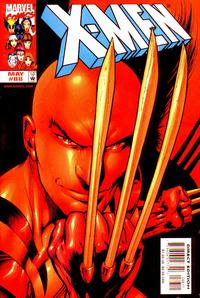 Summary: The X-Men arrive in a monster-infested dimension, where the walls between realities are breaking down. The alien who teleported them, Ejulp, explains that they’re needed to stop Juggernaut. Black Tom appears and confirms Ejulp’s story. The physics of the other-dimension affect the X-Men’s powers, causing Gambit to accidentally blast Marrow, and Storm to enter a trance when she summons the weather. Xavier leaves his physical body in his astral form, and accompanies the X-Men on their search for Juggernaut. When Xavier’s astral form touches Wolverine, their bodies merge. Xavier experiences Wolverine’s bloodlust firsthand as he fights an army of demons. Finally, the team discovers a gigantic Juggernaut. Meanwhile, Storm somehow meets a younger version of herself in Africa.

Continuity Notes: Black Tom explains that after Juggernaut was given the second Cyttorak Gem (UXM #361), he grew more powerful than before. On a mindless rampage, he managed to punch his way into another dimension. Black Tom claims that the second gem was “imbued with the evil spirit of its creator”, who is the “eternal nemesis” of the Trion. The Trion are described as “the sentient manifestations of the forces that compose this dimension.” Years later, Kurt Busiek would use the Trion to finally conclude an Avengers subplot that preceded this issue’s publication (he wanted to use a trinity-deity all along apparently, and it was pointed out to him that one already appeared in this storyline).

Review: Alan Davis’ “Salute to Steve Ditko” storyline begins here (Ejulp’s name is even “Ditko” in code, and we later learn that the alien race's name is Oktid, “Ditko” spelled backwards). I remember people complaining that this was a generic superhero story with the X-Men shoved in, which I never quite understood. It has the X-Men facing Juggernaut, which already makes it an X-Men story as much as the Avengers battling Ultron is an Avengers story, and Spider-Man fighting Scorpion is a Spider-Man story. Character subplots continue to be introduced and advanced, as Gambit accidentally injures Marrow (setting the stage for the two of them to grow closer), Storm meets a mystical version of herself as a child, and Xavier and Wolverine continue their conflict. The next installment explores Juggernaut’s characterization and his relationship with Xavier, which as much of an X-Men story as you can get. I guess it’s a little odd that the backdrop of the story is a tribute to an artist who never touched the X-Men, but I don’t feel as if the same story could’ve been told with just any superheroes. Placing Xavier inside Wolverine’s mind is a clever gimmick, which I don’t think anyone had really tried before. It advances their conflict from the previous storyline, as Xavier now witnesses firsthand Wolverine’s “kill or be killed” attitude, and is unable to make an argument against it as he fights to save their lives. Outside of the increasingly gimmicky stories that involved changing Wolverine’s physical form in some way, it’s hard to think of the last time Wolverine was really used as an actual character outside of his solo series. 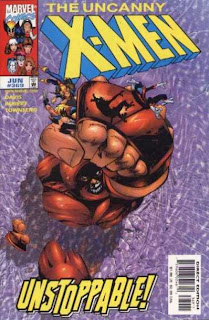 Summary: Storm follows a child version of herself into the African desert. There, she encounters the Triune, who put her in a trance in order to protect itself from her elemental powers. Meanwhile, Professor Xavier and Wolverine enter Juggernaut’s mind on the Astral Plane. Xavier encourages Juggernaut to fight against the entity that is possessing him. Juggernaut fights against his fears, and returns to normal size. However, the explosion of Cytorrak energies causes the dimension to unravel. Storm awakens from her trance and uses her elemental powers to repair the damage. Ejulp tries to send the X-Men home to New York, but the team soon realizes the sky has two moons.

Continuity Notes: The entity possessing Juggernaut is the “dark force” of this dimension, which reached out to the destructive power of the Cytorrak. Storm learns the Triune’s secret while in her trance. She claims that the Triune attempted to “purge itself of evil” by imprisoning wickedness inside a black orb. Without the capacity for evil, the dimension grew sterile, leaving only the Oktids as “pets, distractions, (and) servants”. The Triune summoned the X-Men to stop the Juggernaut, because they felt that humans were already tainted by evil.

Review: This is Terry Kavanagh’s first issue as scripter. Kavanagh was Alan Davis’ editor on Excalibur, and someone he apparently holds in high esteem. Davis specifically asked for Kavanagh to script his plots, and the editors agreed. Allowing the writer of the legendarily awful X-Man to work on the main books didn’t exactly instill a lot of confidence in the hardcore fans. Kavanagh just doesn’t have an ear for dialogue, so it’s not surprising that the majority of this issue’s script consists of dull recaps of the previous chapter and a long-winded origin for the Triune. The basic idea behind the Triune is that a pious deity thought it could overcome evil, but only succeeded in hiding it away, which eventually lead to bigger problems. I suppose this was supposed to be a commentary on the idea that evil is an unfortunate side effect of free will, but the script doesn’t go into any deep philosophy. It’s too bad the script is so bland, because Adam Kubert's rendition of the Triune’s psychedelic dimension is fun, and the basic idea behind the story is fine. There are a few nice moments between Xavier, Wolverine, and Juggernaut inside the Astral Plane, but the rest of the characterizations are just flat.

Funny, I actually enjoyed Terry Kavanagh's scripting for the most part. I distinctly remember telling a friend back then, that I couldn't stand the guy when he was in charge of plotting and scripting, but as a scripter I thought he did an okay job.

This reminds me -- wasn't there an issue during the Twelve storyline that listed Davis only as plotter, with no one listed as scripting -- but it was quite obvious (some might even say "painfully obvious") that Chris Claremont had ghost-scripted?

I believe it's the storyline right after the Twelve, where Mr. Sinister nullifies all mutant powers, that Claremont ghost-wrote. It's actually not a bad story.

Claremont scripted at least two issues during this run. One issue of X-Men that Davis drew, and a UXM issue Tom Raney penciled.