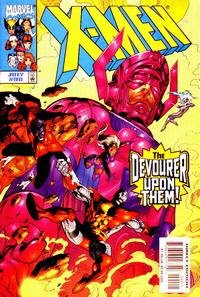 Summary: Xavier enters his psi-form and tries to dissuade Galactus from consuming the Skrull’s planet. Meanwhile, Shadowcat rescues Wolverine from a Skrull army, with the help of her new allies, the Skrull versions of Thunderbird, Adam Warlock, and Captain Marvel. Nearby, Marrow emerges from her healing pod, and is now beautiful and in control of her powers. The team reunites, as Galactus sends Xavier’s consciousness back into his body. While Galactus consumes the planet, the team escapes in a spaceship. Shadowcat places the X-Men in suspended animation as they travel home. They arrive outside of Earth a few days in the past, as Magneto is creating an electro-magnetic pulse. A disruption knocks their ship off-course.

Continuity Notes: The Adam Warlock Skrull was “engineered to be a telepath”, which is an attempt to get around the idea that Skrulls can’t actually mimic powers. Shadowcat explains that Adam Warlock’s Skrull telepathically read her mind and realized she was telling the truth, explaining why these Skrulls changed sides in-between issues. Adam Warlock’s duplicate is critically injured in the fighting, but he telepathically teaches Shadowcat how to fly a Skrull spaceship before dying.

Creative Differences: Alan Davis’ redesign of Marrow debuts this issue. It looks as if her outfit was supposed to be a two-piece bone bikini (you can even see her navel), but editorial added a blue bodysuit for modesty.

Review: And here’s another thing that made people mad -- the debut of Marrow’s new look. I can see two reasons why Davis might’ve gone in this direction: one, just to see how Marrow would react if she got to be as pretty as the “beautiful people” she disdains; and two, as a meta-commentary on how female characters always grow more attractive over the years. Marrow was introduced as a hideously ugly villain, but already had a makeover when Marvel decided to add her to the X-Men (and no one seemed to notice). Now, her attractiveness is something the characters can’t just ignore, so it has to be a plot point. In hindsight, neither idea really came through in the stories, so I could be totally wrong about Davis’ motivations (assuming this wasn’t another editorial decision anyway). I almost wonder if she was made more attractive as a part of her “growing closer to Gambit” subplot. Was she supposed to be a potential love interest for Gambit? I’ll admit that it’s unlikely, and hopefully no one working on the books was shallow enough to think Marrow had to be made even prettier to be a viable love interest.

As for the main story, it’s another issue of misadventures in the Skrull world. Davis’ art is perfectly suited for this story, as he produces page after page of slick-looking Marvel heroes in their iconic costumes. The Skrulls’ imminent doom adds some drama to the story, and there’s some nice material with their internal battles over spaceships and the redemption of Shadowcat’s Skrull allies. Galactus gets to reiterate his role as a cosmic force that’s “beyond good or evil” as Xavier tries to talk him out of doing what he knows he has to do. There’s not a lot of attention paid to this plot point, but Galactus actually saves Xavier (who he knows shouldn’t be in this time period) by sending him back to his body, giving him enough time to escape. The scene reinforces the idea that Galactus doesn’t act out of maliciousness, which is one of the character’s unique traits I’ve always liked. I wish the script could’ve gone deeper into these ideas, but Kavanagh mainly seems interested in recapping story points and re-explaining the X-Men’s powers. His dialogue isn’t as clunky here as it has been in the past, but the majority of the script is just dull. 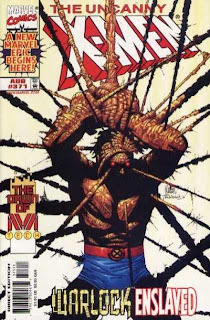 Summary: Xavier dreams he is surrounded by the bodies of his dead students. He awakens with a scream, and learns from Shadowcat that the Skrull’s ship placed the team in cryo-stasis for eight days to protect them from Magneto’s electro-magnetic pulse. Meanwhile, SHIELD agents abduct Machine Man and use his technology to create a new body for an injured agent. Nick Fury is angered that Major Sole ordered the project without his permission. Sole has also ordered agents to investigate a strange occurrence on Muir Island. The X-Men park their Skrull craft on Muir Island, and leave behind Colossus, Shadowcat, and Nightcrawler, who want to visit Douglock. They soon discover Douglock, his powers out of control, attacking a pair of SHIELD agents.

Continuity Notes: It’s revealed months later that the Wolverine who returns home with the X-Men is actually a Skrull. There aren’t any overt hints at this point, though.

Xavier is now acting cold and snappish with his students again. He initially doesn’t want Colossus, Shadowcat, and Nightcrawler to stay behind on Muir Island, but Storm talks him into it. Wolverine comments that Xavier is losing his mind. These are teases for the next few issues (and they’re actually paid off!).

Review: This is the first part of “Rage Against the Machine”, a crossover designed to set up the ill-fated M-Tech line of books. Marvel wasn’t shy about admitting that the X-books were used to set the line up because they felt they offered the best chance for commercial success, but the days of fans blindly following anything X-related were long gone by this point. Douglock received his own title as Warlock, so working him into the storyline isn’t much of a stretch. However, new books for Machine Man and Deathlock also had to be set up, which isn’t the easiest fit. Davis does his best with the situation, though, and uses the M-Tech material as the superhero action for a few issues while the character subplots continue. Marrow reacts to her new look, Gambit continues to feel guilty about hurting her, Xavier behaves strangely, and Wolverine begins to cast doubts about Xavier. Davis manages to weave it all in comfortably, so the M-Tech setups aren’t as distracting as you would expect them to be. Jimmy Cheung, who was doing X-Force at the time, shows up as guest penciler and does a very nice job. His style fits in with Kubert’s cartoonier look, and he manages to handle the multiple figures and complicated technology very well. I’m surprised he didn’t do more issues during this era.

A few things Id like to comment on:
The Wolverine that came back with the X-Men was the real Wolverine, he didnt get switched till after they had returned to Earth's orbit, in our current time. Its revealed later that the Skrull survivors knew the X-Men were heading to Earth and had been waiting to ambush them.

As for Marrow, I never had a problem with her change infact I liked it. I was hoping they were going to turn her into Gambit's sidekick in his ongoing series but it never happened. As for a love interest for him, I never saw it.
I know later they had her and Creepy Pete try and have a love interest type deal. Creepy Pete liked em young.

Didnt matter much as the next 12-15 issues or so they will just write her out of the series. Actually I cant remember what happened to her after The Twelve.

Also, wasnt the Magneto Rex mini series during this time? Im guessing this is why Rogue was the only X-Man from the current team to not be involed in this time travel journey.

As for M-Tech, blech.

M-Tech was doomed from the start (was *anyone* excited about it?), but Joe Casey & Leonardo Manco did a good job on the Deathlok revival. I bought every issue.

"The Wolverine that came back with the X-Men was the real Wolverine, he didnt get switched till after they had returned to Earth's orbit, in our current time."

I know, the switch happens during the eight days the X-Men are in stasis. I meant "return home" with the X-Men literally, since it's no longer Wolverine once they reach Earth.

Ahh, the days when Jim Cheung was regularly drawing a title (and even had time to guest pencil an issue of another title!). I miss them!

I think that Davis never got Marrow's personality to begin with, so changing her from "ugly" to beautiful doesn't create the effect you were writing about. It's like some random character with no personality suddenly got through a change - it doesn't mean nothing. Reminds me of the majority of plot devices in the 90's, when the writers/editors tried to cover on their character's lack of personality by giving them some arbitrary change that didn't help at all (Wolverine being the most obvious example). That's not how you build interest in the character and development...

Also, from a critique point of view, the moral of the Marrow arc is bad: What we learn from X-men #90 and especialy from UXM #371, is that she feel complete now. That means that the long arc of her acting like a psychopath is getting resolved by a mere thing like an appearence, and now she is all sweet and heroeic. Not an inner development, not learning to except yourself and learning that the appearence has nothing to do with your personality and behavior - and with who you truley are: You get your salvation by looking like a model.

There's something bugging me about the whole time travel thing.

I mean, the team goes to the past and then is placed in crio-stasys in order to arrive on Earth at the exact time they parted. There's a miscalculation and they arrive earlier than expected and "see" themselves lying defeated in the Artic's snow. Then the magnetic pulse occurs and the sleep for another 8 days, waking up after the whole magnero war/rex thing.

What the hell happened to the other team? I think that they also time travelled, thus creating a loop, am I right? It's the only possible explanation in my opinion.