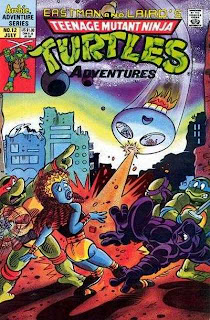 The series really takes advantage of its twenty-eight page length with this issue, as the pace picks up considerably. The Turtles find themselves in Dimension X with Cherubae, the former warlord who disguised herself as Mary Bones on Earth. She explains that all warlords were banished in Dimension X once the theocracy took over. She somehow has possession of the legendary Turnstone (which, according to myth, belonged to the first woman and was given up when she used it to create the first man…alternate theology, folks), and is hiding out from Krang. Rather shamelessly, she’s using the Turtles to help protect the Turnstone from Krang.

Krang soon discovers Cherubae, and takes her down with a combination of X-Ray Lasers and a “Braak! BaDoom!” blast. Cherubae drops the Turnstone on the planet she left the Turtles on, and her body is soon surrounded by the Sons of Silence. The Sons disappear with Cherubae, much to Krang’s chagrin. He sends Shredder, Bebop, and Rocksteady to find the Turnstone while he seeks additional help. He contacts Maligna, the queen of a race of alien insects. 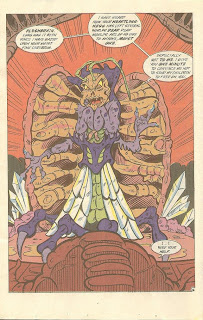 (Notice the pre-Comicraft crazy font.) Krang promises to give her Earth if she sends ten of her children to help find the Turnstone. Meanwhile, the Turtles’ search leads them to an empty coliseum. Cudley the Cowlick suddenly appears, offering to deliver help if the Turtles agree to another intergalactic wrestling tournament. They consent, and Cudley promptly delivers Wingnut, Screwloose, Leatherhead, and Trap (who had a one-panel cameo appearance back in issue #7).

Trap is a cigar-chomping tough guy who may or may not be a parody of the archetype that also gave us Cable in New Mutants at around the same time. He asks Leonardo what exactly they’re supposed to do, as Maligna's hive lines up to attack. To be continued…

Review in a Half-Shell: The issue opens with a poetic description of two rhinos at peace in Africa. On the next page, we learn that it’s Rocksteady dreaming of his past with his mate, revealing that Rocksteady has the memories of the rhino used in his mutation. It’s a brief scene that gives some depth to the character, and helps to signify the more sophisticated style the book is developing. This feels almost like a “season finale” comic, as elements from the earlier issues return to form the pieces of a larger puzzle. It reads more like a traditional “big two” superhero comic from the late ‘80s/early ‘90s, while also retaining some of the odder elements of the Turtles canon. Plus, Cudley returns, and everyone loves Cudley.

Pizza References: One. Leonardo suggests conjuring up pizza with the Turnstone once they find it.

Turtlemania: You can join the Turtle Force Fan Club for $4.50. You get a newsletter, comic, bandanna, sticker, and official wall certificate.

Meanwhile, in Riverdale… : At last, Jughead has his own Double Digest.

"I give you one minute to convince me not to send my children to feed on you."

"Moist one", now there's a term that sounds a lot different to me now than it would have as a kid.

For some reason, this was always one of my favorite covers from this series.

This was the first issue of TMNTA I bought which was actually one of the first comics I regularly read. I was already a Turtle fan and after seeing the movie and reading my movie books I realized this all started with a comic, and this was the one I could get off my local gas station's spinner racks.

I recognized right away this was different than any other Turtle media I'd been exposed to, but this hooked me and I could see it had more to it. The Rocksteady bit you talk about was very interesting and I really liked where it took him and Bepob in the next few issues.

I also really like Maligna's font. Also, she's much cooler than her accidentaly-ripoff Lady Styx from DC's 52.