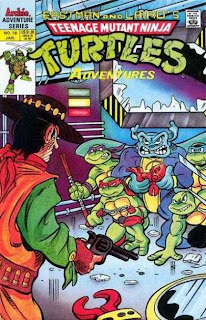 Man Ray returns! Although he has to throw in that “some know (him) as Ray Fillet,” which was the name used in the cartoon and toy line. The Turtles are reunited with him after they’re kidnapped by a strange vehicle while sailing home. Man Ray explains that since the last time he saw the Turtles, he’s been exploring the ocean and learning more about his powers (conveniently enough, he’s discovered that he has an organ that lets him breathe on dry land). While exploring the sea, he also discovered Bubbla. 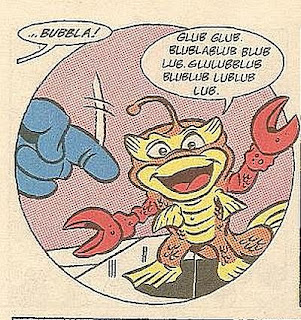 Bubbla belongs to the hidden world of Glublub, which is being poisoned by evil polluters. When Man Ray and Bubbla investigated a nearby toxic waste dumping site, they became sick and blacked out. They awoke inside their current prison, which they soon escape with the Turtles’ help. Their captor is Mr. Null’s henchman, The Kid, and his goons, the Oceanauts. They don’t put up much of a fight, but Kid does get off one good shot.

Man Ray, enraged by Bubbla’s death, destroys the entire underwater base. The Turtles and April O’Neil escape on the backs of some helpful sea turtles (returning the favor of a few pages earlier, when Donatello rescued one from a plastic six-pack ring). The Turtles reunite with Man Ray on the beach, and hold a memorial service for Bubbla. Poor Bubbla… 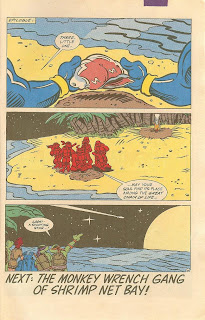 Review in a Half-Shell: I don’t know if introducing a cute and cuddly sidekick for Man Ray and killing him off a few pages later was intentional black comedy, but it’s certainly not something you see coming. This issue runs twenty-nine pages, and Man Ray doesn’t even show up until page eighteen. I wouldn’t call it decompressed, but there is a relaxed pace in most of the issue. Splinter spends a page meditating about the Turtles’ return, The Kid searches for the Turtles for two pages, the Turtles hang out on the beach for a few pages, say goodbye to Jagwar and Dreadmon, then have fun in the ocean for awhile, etc. It doesn’t feel as if the story’s wasting time, as Clarrain/Murphy makes the characters likable enough, the setting is something you rarely see in comics, and Mitchroney’s art is very clean and attractive.

I Was Not Aware of That: Man Ray was renamed “Ray Fillet” because Stephen Murphy and Ryan Brown objected to using him as a villain in the cartoon and toy line. Since they created the character, they had final say over his appearances in other media, and remained adamant that he stay a hero. Renaming him “Ray Fillet” and altering his design technically makes him a different character, which I guess was the condition that allowed him to appear outside of the comics. (More info here and here.) Bubbla, by the way, is based on a tiny figurine that came with the Ray Fillet toy.

“Cowabunga!” Count: I considered doing this category when I began reviewing the TMNT comics, but didn’t even see a usage of the word in the early issues. Unless I missed one, “Cowabunga!” shows up for the first time in this issue. Michelangelo says it twice, once while surfing at the beach, and later when his body is used to break the glass imprisoning the Turtles.

Good grief! I always knew it was there, but I had forgotten just how much environmental awareness was in this series! It's getting ridiculous! I'm starting to think the writers were being paid off by the EPA!

Also, is it just me, or is that cover a huge spoiler that Bubbla might not survive the story intact? Granted, he could just be unconscious, but still...! I've never understood spoiler covers like that.