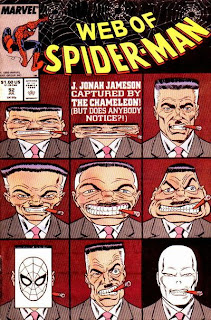 The Plot: Jameson attempts to break out of his chains while the Chameleon is away. He flashes back to his experiences as a young reporter investigating police corruption. When his editor refuses to pursue the story, Jameson goes to work for the Daily Bugle. Jameson’s sidekick, a copyboy named Danny, is soon killed by a trap intended for Jameson. Jameson works through his grief and connives a way for the cop behind Danny’s death, Kenner, to confess on tape. In the present, Chameleon returns as Jameson is freeing himself. He locks Jameson in the closet as retaliation.

Web of Continuity: We learn about the history of Jonah Jameson and the Daily Bugle in this issue. Jameson is a twenty-year-old reporter in the flashback, working for the New York Herald Journal Express, after a stint at the Daily Bugle. He’s courted back by Bugle owner William Walter Goodman, who encourages Jameson to pursue the story and inspires him to keep going after Danny is killed.

Review: This is a “special” issue, from back in the day when stories that didn’t feature superhero action were rare. John Romita, Sr. is the co-artist, which is another indication Marvel probably wanted this story to have more weight than the average issue. Gerry Conway parallels Jameson’s struggle to expose police corruption with his fight to escape the Chameleon’s imprisonment, while also providing another justification for Jameson’s hatred of heroes. Following his experiences with Kenner, Jameson knows heroes “are the bunk” and he’s determined to know the truth about the people who claim to be selfless defenders of the innocent. He’s paired with Danny, a thinly veiled Jimmy Olsen analogue who actually gets offed during the course of the story. Conway goes a long way towards humanizing Jameson in the flashbacks, playing up his admirable qualities while not shying away from his blatant hypocrisy and inflated ego. Jameson’s one of the better supporting cast members in comics, and while it’s easy to play him for laughs, the stories that convincingly portray him as more than a cartoon character are also worth trying. 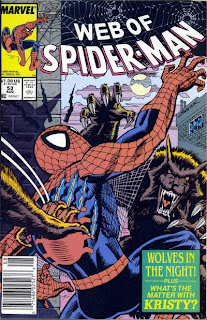 Wolves in the Night

The Plot: Spider-Man intercepts an arms shipment into New York and learns that the Lobos Brothers are planning to attack the Kingpin’s tower at midnight. As Peter Parker, he tries to tell Jonah Jameson, but “Jonah” refuses to run the story. After investigating Glory Grant’s apartment, Spider-Man locates the Lobo Brothers, but can’t prevent their escape. Soon, the Arranger sees their helicopter outside of his window.

The Subplots: Kristy Watson collapses in the bathroom, and Aunt May is unable to help her because the door is locked.

“Huh?” Moment: Peter storms out when “Jonah” refuses to print his story on the midnight attack, upset that a potential bloodbath won’t be prevented. There are other newspapers in New York, Peter. You’ve even worked for a few of them. Why does he act as if the Daily Bugle is his only option?

Review: The Lobos Brothers storyline continues, as Spider-Man finally pieces together that the Lobos Brothers are actually werewolves, Joy Mercado comes clean about spying on Glory Grant (a Spectacular Spider-Man storyline referenced here for the first time), and the Chameleon and Hammerhead sit back and wait for the Lobos to handle the Kingpin. You would think that the story is reaching the climax, but it actually runs until #55, with a few more chapters showing up in Spectacular Spider-Man. While Conway advances the plot, he works in some nice character moments. Spider-Man is disgusted by working with the Arranger, Arranger is terrified of Kingpin, Joy feels guilty for spying on Glory, Kristy is jealous of MJ and still trying to hide her crush on Peter, and Kate Cushing is sticking with the Daily Bugle out of loyalty to Robbie Robertson, even though Jonah appears to be worse than ever. To me, this is the material that makes a Spider-Man comic, and it’s one of the reasons why over-the-top “events” never seem to work with the franchise. If there's no room for the characters, it's not Spider-Man.

My first ever issue of Spiderman was a Conway issue. Spectacular #164, to be exact. He left me with a soft spot for the Beetle after that issue, so hats off to him. He definitely knows Spidey, too. I remember only being able to pick up on a few of the subplots, but definitely being curious about them.

The next issues I got were Amazing Spiderman #349-350, which blew me away at the time. Those turned me into a lifelong Spider-man fan.