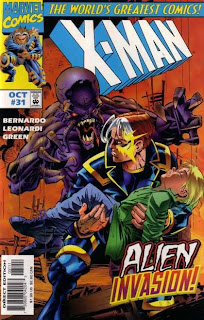 A fill-in issue by Marvel editor Mark Bernardo and Rick Leonardi, who’s actually a better artist than any of the regular pencilers ever assigned to this title. Bernardo uses the fill-in to create a sequel to, all of things, the ROM storyline that guest-starred the X-Men. (Check out Siskoids' look back here and here.) X-Man follows the trail of a young boy he sees in his dreams to a hospital in upstate New York, where he learns that the boy is actually Hybrid, the unholy child of a human and Dire Wraith. Hybrid uses X-Man’s psychic power to reconstitute his solid form, but X-Man defeats him after he finds the tiny fragment of an innocent child that still lives inside the monster. The execution of the ending is actually much better than it sounds on paper, and I’ll give Bernardo credit for having X-Man use his powers in a few creative ways in the issue. (Everyone remembers what psychometry is, right? Well, X-Man can do that, too.) Bernardo also has more of a knack for natural dialogue than many of his editorial co-workers who are called upon for quick fill-ins. Perhaps he should’ve replaced Ralph Macchio as the X-office’s routine “guy across the hall” who’s brought in at the last minute.

Catching Up From Behind 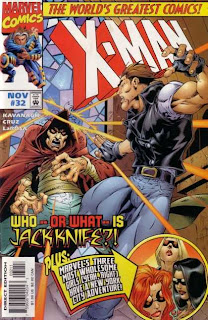 Terry Kavanagh returns, as X-Man reunites with the three “bad girls” who rescued him after his encounter with the Brotherhood. This issue reveals their names as Bux, Jam, and Marita, and wouldn’t you know it, they’re into clubbing, piercings, and tattoos. X-Man spends a night at the club with them, attracting the romantic attention of a blonde woman who turns out to be one of the bad girls’ parole officer (a parole officer with a Playmate’s body and a penchant for wearing skintight jeans that are ripped in strategic places). Meanwhile, Roust, the former follower of the Abomination who’s been looking for X-Man, is stalked by Jackknife. The new villain is another homeless person taken in by Abomination, who’s now driven insane by his mutant powers. He’s on a killing spree, murdering anyone with a connection to X-Man. The story hints that Threnody was one of his casualties, but on the final page, we see her “feeding” off Jackknife’s other dying victims. Aside from the extended club scene, which tries so hard to show us how hip X-Man and these girls are, this is pretty unobjectionable material. At least X-Man doesn’t act like a total idiot, and the story’s even setting him up to play the hero in the next issue. 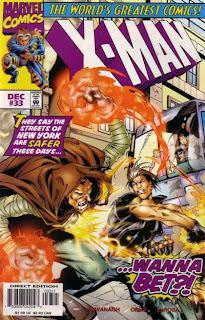 Jackknife continues to act irrational and insane, which may or not be a deliberate parallel to the way X-Man usually behaves in this series. He reveals that he was a bystander to X-Man’s earlier fight with Abomination, and his exposure to X-Man’s powers triggered his own. Now, he’s a powerful enough psi to counter X-Man, and his motivations don’t go any deeper than some vaguely defined revenge plot. X-Man protects the locals and finally defeats Jackknife by using power lines to shock him into unconsciousness. The police want to arrest X-Man, but all of the bystanders defend X-Man, which is apparently supposed to solidify his role as the Village’s superhero. Jackknife is rather lame, unless he really is an intentional parody of X-Man, then he’s great. I wholeheartedly endorse more Jackknife appearances if he’s used to make fun of X-Man. Roger Cruz is still sticking with the book, and his work on the lengthy, chaotic fight scene isn’t bad at all. Nothing else to say about this issue, so I’ll just recite the Statement of Ownership numbers. Average sales were 148, 203 for the year with the most recent issue selling 125,862 copies.

Those sales numbers on a low tier book like this are just uncanny compared to what's considered a top seller today.

Those were the days, I suppose...