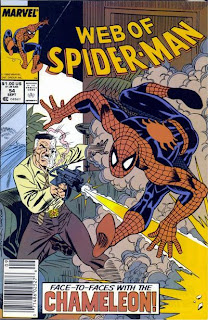 The Wolves of War

The Plot: The Lobo Brothers attack the Kingpin’s penthouse, but are unable to find him. Spider-Man barely reaches home after being injected with a virus by Jonah Jameson. He awakes two days later and learns the Daily Bugle is blaming him for the gang war. He angrily confronts Jameson at his home, only to learn that he’s the Chameleon in disguise. After Chameleon escapes, Spider-Man rescues the captive Jameson.

The Subplots: Kristy Watson is admitted into the hospital to treat her bulimia. MJ begins to buckle under all of the pressure she’s experiencing.

Web of Continuity: Peter refers to Kristy as being thirteen, but other issues list her age as fifteen. The letter column later confirms she’s fifteen. MJ’s modeling career is now dead, thanks to the efforts of Jonathan Caesar. Carlos Lobo begins to wonder if Glory Grant is making Eduardo weak.

*See _________ For Details: The Chameleon, disguised as Jonah Jameson, injected Spider-Man with a virus in Spectacular Spider-Man #153. Kristy was taken away by an ambulance and diagnosed as a bulimic in the same issue.

“Huh?” Moment: Chameleon unleashes a gas to stop Spider-Man, bragging that the nose filters he wears protect him. What about his open mouth, which he’s using to taunt Spider-Man? Considering that Spider-Man wears a full mask, he’s actually more protected from the gas than Chameleon is.

Review: Revealing that the Kingpin is in hiding drags the main story out for a few more issues, which doesn't seem necessary, unless Conway really wanted Jameson rescued before the gang war storyline concluded. This is essentially the same as the past few issues; the gang war escalates, Nick Katzenberg annoys his coworkers, Kristy gets sicker, and MJ grows more distressed. The Chameleon-posing-as-Jameson subplot is resolved, ending a storyline that has been growing in all of the titles. Although Web never really explored the idea, the other titles emphasized that Chameleon had essentially blacklisted Peter at the Daily Bugle in favor of Katzenberg’s more scandalous Spidey photos. This added to the Peter and MJ’s money problems, and made the prospect of moving out of Aunt May’s even dimmer. Like I’ve said earlier, I’ve always loved that status quo, and Conway’s handling of the boarding house’s “family” is one of my favorite aspects of his run. 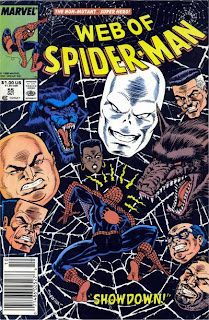 The Plot: The Lobo Brothers wreck havoc in New York, hoping to draw Kingpin out of hiding. He eventually returns, offering a truce. Spider-Man tails Glory Grant, who’s taken to the secret meeting by Eduardo Lobo. The peace conference is interrupted by mobsters working for Chameleon and Hammerhead, who start a shootout. Kingpin escapes, as Glory uses the Arranger’s gun to kill Eduardo during his fight with Spider-Man. When Spider-Man thanks her, she reveals she wasn’t aiming for Eduardo.

The Subplots: Jameson returns to work, and refuses to run a deceptive photo by Nick Katzenberg. Peter and MJ continue their futile search for an apartment in Manhattan. Katzenberg learns Glory is dating Eduardo and follows her to the meeting, taking photos of the entire ordeal.

I Love the ‘80s: Glory Grant now has a hairstyle reminiscent of something you would’ve seen on the first season of In Living Color.

“Huh?” Moment: The Lobos Brothers, who are mutants born with the ability to turn into werewolves, only transform during a full moon, and are vulnerable to silver. This only makes sense if you believe they’re descended from mutant werewolves who somehow inspired the traditional werewolf legends, which sounds like Chuck Austen nonsense.

Review: After several months of buildup in Spectacular and Web, the Lobos Brothers story concludes. Oddly enough, even though there are numerous directions Conway could’ve gone after this issue, he moves on and doesn’t really look back. After this issue, Glory Grant fades into the background, and the repercussions of her relationship with Eduardo are never explored. Chameleon and Hammerhead make a few more appearances together, but never take on Kingpin, and within a few months, Chameleon is working on his own again. And what does Carlos Lobo do now? What happened to these threads? Maybe Conway was just bored with the underworld stories, but he left so many potential doors open, it’s a shame they weren’t explored.

Regardless of the wasted potential, this is an exciting conclusion for the arc. Conway really has a strong handle on all of the characters, so the Kingpin appears appropriately imposing, Eduardo seems genuinely conflicted, and Peter’s standard anxieties feel real. Aside from his inability to console MJ on their current problems, he also has no idea what to tell Glory when she asks him for help. He gives the horrid advice of “follow your heart,” which is exactly what she does a few pages later when she tries to kill him when he’s fighting her boyfriend. Really, Glory should be an emotional wreck after the events of this issue, so again I’m left wondering why her character was brushed aside after this arc. Oh, well. The next issue brings us the Rocket Racer vs. Nazi-blob storyline, so at least I have something to look forward to.

Y'know, looking back on all the issues you've reviewed over the past couple of weeks, it's funny how things worked in the days of the newsstand. I read issues 47-48, missed 49, read 50, missed 51-53, and read 54-55. At the same time, I sporadically read Spectacular as well. And somehow, I was able to follow the storylines with ease, and never really felt like I had missed anything thanks to recaps, flashbacks, and editor's notes. I feel like that sort of casual reading experience would be impossible these days.