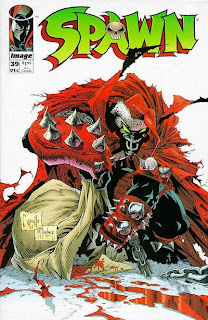 Summary: Greggy, a young child in a poor neighborhood, is left alone on Christmas Eve after his mother leaves for work and his sister sneaks out. Spawn drops on to his rooftop while pursuing a gang of thieves. Spawn ties the criminals together and flies off, leaving Greggy to believe he’s Santa Claus. Greggy discovers a leftover bundle of cash, which he gives to his mother as a Christmas present.

Spawntinuity: The inside front cover now has a recap paragraph, which actually describes Spawn as having “no purpose” and “spinning aimlessly.” See, kids, you’re supposed to be bored with Spawn’s utter lack of ambition. The text also spells Cagliostro as “Cogliostro” (which becomes the official spelling even though it’s a misspelling of the real-life name that inspired Gaiman in the first place) for the first time.

Review: I guess even atheist creators with satanic anti-heroes feel the need for the occasional Christmas story. I wonder if this was an idea McFarlane had left over from his Spider-Man days, since there’s a pretty glaring hole in the story -- Spawn doesn’t chase criminals. He’s never shown the slightest interest in stopping bank robbers or car thieves. After he rescued a woman from a gang rape in the first issue, he even reflected that he didn’t know why he bothered since he isn’t a hero. Spawn does rescue the local homeless from the disproportionate number of teenagers who hang around the alleys and set bums on fire, but that’s because they’re allegedly his friends. Unless the area bums have neatly wrapped bundles of cash lying around, this is probably money stolen from the bank. Having Spawn fly for the first time on-panel, just to do a riff on Santa and his reindeer, is another odd decision on McFarlane’s part. A Spawn Christmas story does have potential, though, when you consider Christmas commemorates the birth of God’s son, and Spawn was created to fight a war against God. There’s a story in there, but McFarlane seems more interested in doing another human-interest story about the poor. At the very least, you do get a sense for how much Todd likes kids, and this a break from the series’ usual austerity.